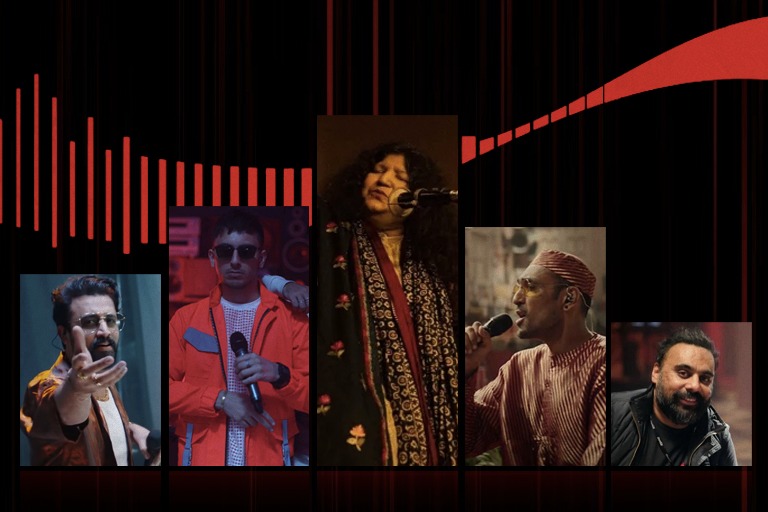 KARACHI: For the longest time, I couldn’t understand why my younger brother (by seven years) was so disinterested in Pakistani music. How could someone who grew up in Pakistan not listen to the likes of Strings, Junoon, Entity Paradigm, Fuzon, Jal, Abrar ul Haq or even Shehzad Roy? For the longest time, I would accuse him of being uncultured and we would almost always end up in a heated argument. So, imagine my surprise when the same uninterested kid told me how much he is enjoying Coke Studio season 14. It made me wonder, what is so special about the new season that it has all age groups vibing to it? The answer, as it would turn out, is quite an interesting one.

When I look back at my growing up years in Pakistan, the early 2000s, the local music scene was pretty happening. We spent most of our time getting lost in Bilal Maqsood crooning about his ‘Bichra Yaar’, rocking out to ‘Jazba Junoon’ thinking we were rock stars, head banging along to ‘Hamesha’ or enjoying more upbeat songs such as Shehzad Roy’s ‘Saali’. For most part, the songs were soulful and had meaningful lyrics. But as time went on, the music scene in Pakistan became stagnant.

Only a handful of new names, such as Atif Aslam’s, made their way into the industry until things went silent. This was partly because Bollywood took over. Our singers began performing on the other side of the border and Lollywood gradually went into decline. Local music channels such as ARY Music, MTV Pakistan and Play Tv eventually shut down. And that’s when the generation long void began.

It was around this time that my younger brother’s generation, or Gen Z as we call them, was growing up. As with each passing generation, their taste in music began to evolve. They began to focus less on lyrics and more on beat drops. They wanted more party music, more variety. And they weren’t finding it in Pakistani music.

It is only as of late when Pakistani music began to pick up and new artists began to emerge. Names like Asim Azhar, Young Stunners, Shamoon Ismail, Hasan Raheem, Manu and Taha G began popping up but they were relatively unknown to the masses. The new wave of music in Pakistan remained untapped for most of the part, for no other reason than lack of accessibility. The primary source of access was YouTube and unless you knew who you were searching for, you really didn’t know where to look.

A major breakthrough came with Spotify in early 2021 but again, the reach was limited. It is only recently that the Pakistani Indie genre was introduced on the app, paving the way for younger talent. But then, Coke Studio season 14 aired. It was announced that Xulfi would serve as the producer and he brought on Abdullah Siddiqui as associate producer. Both men are masters of their own accord.

Zulfiqar Jabbar Khan aka Xulfi is no stranger to the Pakistani music scene. He’s been around since 1994 and if he wasn’t singing or playing the guitar, he would be churning out hits for Nescafe Basement. Nescafe Basement was also testament to the fact that Xulfi had a penchant for discovering new talent such as Arsalan Hasan (who also featured in Coke Studio season 14), the Leo Twins, The All Girls Band and Karakoram. He also helped compose the PSL anthem "Groove Mera". It is pretty obvious that Xulfi is as in touch with the new generation of music as one can be.

Abdullah Siddiqui, on the other hand, is the new generation of music. In his early 20s, he has already made it to Forbes 30 under 30. He has three full length albums and has produced songs like the current PSL anthem “Aagay Dekh.”

Working together, Xulfi and Siddiqui allowed Coke Studio season 14 to fill the generation wide gap in the Pakistani music scene. The very first thing that they ensured was to make the songs appealing for all. They didn’t want to lose their previous audience and so, they made sure to bring fan favorites like Abida Parveen and Atif Aslam back on board. They also mixed things up and took risks. Who would have thought that a sufi singer and a folk singer would beautifully merge together for “Tu Jhoom”? The creators also played it safe with their Atif Aslam and Momina Mustehsan collaboration.

However, perhaps "Pasoori" is the true testament of how Coke Studio has bridged the gap between two generations. The lyrics and the message behind the song is deep, it is a tale of love and betrayal. The lyrics are at times hard to understand, especially for non Punjabi speakers, and it isn’t the kind of song the young generation would typically vibe to. Yet, somehow they were doing exactly that. By adding a catchy beat and instrumental diversity, the song became a fan favorite especially amongst the younger audience. The older audience found comfort in familiar faces like Sheema Kirmani in the video and also appreciated the intensity of the lyrics.

The current season also introduced new genres of music in different regional languages. “Kana Yaari” put the spotlight on Balochi songs and just how fun and upbeat they can be. “Yeh Duniya” paved the way for heavy rock. Both songs also prove that Pakistani rappers such as Talha Anjum, Eva B and Faris Shafi aren’t to be taken lightly. The songs prove just how diverse Pakistani music can be.

This season of @cokestudio is on fire and so is Eva Baloch 🔥 also a huge shout out to whoever worked on the idea of sliding the walls away and bringing all the artists in one space at the end of the video. KHOOBSURAT!!! Take all my money! #KanaYaari https://t.co/TzqOlCkQZu

But Coke Studio’s focus wasn’t just on maintaining their previous fan base. Xulfi and Siddiqui played their hand and brought Hasan Raheem on for "Peechay Hutt" and his fan base, the young crowd of Pakistan, went wild. The funky sound, Raheem’s trademark mumble, Justin Bibi’s catchy chorus, Talal Qureshi’s unique electronic beat as well as the inclusion of the Shina language made the song incredibly unique. In just three days, the song gathered over 3 million views. “Yeh Duniya” was also a song that targeted the younger generation to remind them that rock music in Pakistan is very much alive. And our rappers can spit out lyrics at an alarmingly fast rate.

To add to the list of things that Coke Studio season 14 has done right is the visual appeal of the songs. From the lighting, to the elaborate sets, to the video game theme, the songs come with their own music videos. The different instruments featured to the brilliant wardrobe, we see a little bit of all age groups in the visuals, making the season that much more fascinating.

With banger after banger released by the maestros, we can hardly maintain our excitement for what’s to come for Coke Studio. But what is certain is that season 14 has reinvented Pakistani music altogether.