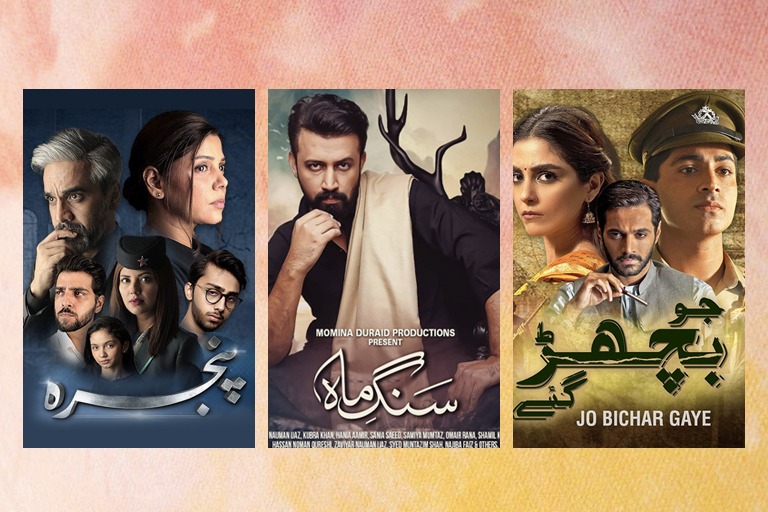 KARACHI: Like every year, 2022 has seen a plathora of Pakistani dramas presented on screen. While local dramas often tend to spiral downwards and get stuck in the web of age-old narratives and scripts, some serials really manage to pull through and impress audiences. This year was no different and in fact, managed to produce quite a few decent watches. From addressing toxic parenting to touching upon social taboos, and allowing women to lead from the front, here are our favourite dramas of the year.

The last play that was written by the powerhouse that was Asma Nabeel, Pinjra sheds light on different kinds of parenting styles and the types of children each produces. So many of us continue to punish our children in the name of discipline. However, that does not mean that children will always mold into whatever container you choose for them. Some may take the shape you want but others will find secretive ways of finding their freedom. We call them ‘rebels’ in our part of the world. Either that, or children might give up on themselves and life altogether. These are all issues that drama serial Pinjra has chosen to address.

Pinjra is a lesson for all brown mothers who learn to live with their heads bowed down in front of their husbands and expect their children to do the same. Whose fear outshines their love for their children. It is a wakeup call that following your teenage daughters around like a shadow does not mean they will stay clear from all sorts of trouble. It just means they will find ways to retaliate and keep secrets. It is a lesson that strict parenting does not equate to perfectly obedient children. And that having dreams does not equate to disobedience.

If there is one man that Pakistan wholeheartedly and unanimously loves, it is Atif Aslam. And the artist sure known how to keep giving back to his fans since he decided to make his television debut with Sang-e-Mah earlier this year. While Atif Aslam’s portrayal of Hilmand was surprisingly captivating given that the role was not the easiest one to play, it was not the only aspect worth praising. Featuring a strong cast with the likes of Sania Saeed, Nauman Ijaz, Samiya Mumtaz and Hania Aamir, and carrying a social message, the drama had all the ingredients to make it a hit. It not only highlighted how Ghag (where ownership of a woman is declared by firing outside her house) is a form of violence against women, but the ripple effect that it has on generations.

Specially appreciated was the fact that Sang-e-Mah allowed for strong, confident women. Sania Saeed as Zarghuna is absolutely fierce and raises her daughter the same way. They rise against men, face them head on and fight for their right without ever being driven by fear. Kubra Khan also plays Sheherzaad, a journalist who makes it a mission to help the village women and bring an end to the practice of Ghag.

Yet another drama that touches upon topics that others would not dare to acknowledge. Based loosely on the memoirs of Colonel Z.I. Farrukh, Jo Bichar Gaye was written by Ali Moeen and directed by Haissam Hussain. Starring Wahaj Ali and Maya Ali in key roles, the drama also marked Talha Chahour’s TV debut and the actor did not disappoint with his performance. While the drama takes place in the turbulent times before Bangladesh’s emancipation, the beauty of the story lies in the fact that at its core is a story about human emotions. From the screenplay to the direction and the production quality of the drama, Jo Bichar Gaye was in a league of its own and proved exactly what local artists are capable of if they choose to step out of their comfort zones.

Over the decades, Pakistani viewers have been deprived of storylines that allow women a seat at the table. On screen, female characters are either being abused, deprived of their rights, or plotting against one another. Hence, when a drama like Sinf-e-Aahan allows for multiple female characters to take centre stage, audiences welcome the change with open arms. Starring the likes of Yumna Zaidi, Sajal Aly, Syra Yousuf, Kubra Khan and Ramsha Khan all in one frame, Sinf-e-Aahan was all about women empowerment, female friendships and challenging stereotypes. Over all a fell-good drama, the show allowed women a ray of hope and a break from toxic storylines and characters.

Comedy is a risky path to choose, specially since on-screen humour in Pakistan tends to turn into slapstick comedy and crude jokes. However, Saima Akram Chaudhry, who has proven her craft with hits like Ishq Jalebi before, hit the nail on the head once again with Hum Tum. Though only a Ramzan special, Hum Tum had everything we wish to see more of in our dramas. Healthy masculinity, ambitions women, supportive in-laws and loads of stereotypes shattered. And of course, at the forefront of it all was the fact that Ahad Raza Mir graced our screens once again and his chemistry with Ramsha Khan made the show all the more enjoyable.

You know the project is going to be a hit when Saba Qamar is a part of it. From her films to her dramas, the actor has been on a roll throughout the year. Add the likes of Ahsan Khan and Mikaal Zulfikar to the blend and you have a hit show. What makes Fraud an interesting watch is not only the talented cast but also how close to home the storyline hits. It sends chills down one’s spine to realize that Fraud is more than just a drama. It is a reflection of the kind of people that exist in our society. It is an accurate representation of the thousands of girls and families who are exploited at the hands of such gangs. Fraud also holds up a mirror for the rest of us to let go of our ‘holier than thou’ attitudes and truly recognise good people amongst the rest, and become one of them.

Perhaps one of the most watched dramas of 2022, Mere Humsafar may not have ended the way we would have wanted it to. Dragged for a few episodes longer than needed, the show did teach us quite a few lessons along the way. Hamza’s character, played by Farhan Saeed, specially became a symbol of healthy masculinity and showed us just how normal it should be for men to be standing up for their wives and sisters, and against injustice. Through Hania Aamir’s portrayal of Hala, we witnessed the impact the absence of parents can have on children, specially as they grow older. Shahjahan played by Saba Hameed was a little too toxic for our liking but it brought us some solace to see that she was not left completely unharmed and did have to bear some consequences of her actions. Moreover, Sameen’s character played by Zoya Nasir deserves a special mention for prioritizing her dreams over a marriage that is not meant to be, and standing up for what she rightfully deserves.