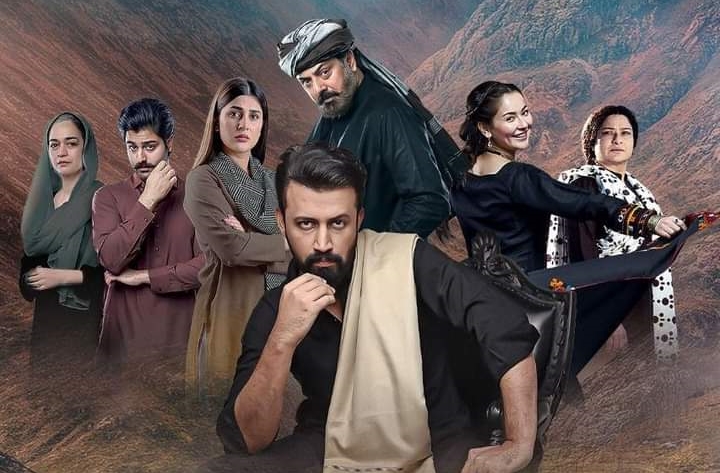 KARACHI: Sang-e-Mah is brilliant. There is no other way to start a review of the drama than to put this out there first. The drama has set up a fresh set of expectations for any show that follows suit. It is crisp. It is engaging. It is not a love triangle and it deals with a social message without waving its flag in our face.

Directed by Saifi Hassan and written by Mustafa Afridi, the story revolves around Haji Marjan’s (Nouman Ijaz) family. He has two sons. The elder, Hilmand (Atif Aslam), is an estranged stepson while the younger, Hikmat (Zaviyar Nouman), is Haji’s flesh and blood. The elder son has taken to living at the graveyard, close to his biological father’s grave.

Haji Marjan is the jirga leader of his area while his wife, Zarsanga (Samiya Mumtaz) is estranged from her younger sister, Zarghunah (Sania Saeed), because of a ruling that the jirgah gave years ago. Zarghunah has a daughter Gulmeena (Hania Amir) who happens to be in love with her cousin, Hikmat. Zarghunah also has Mastan Singh (Omair Rana) and Badam Gul (Hassan Nouman) as her helpers, both of whom have interesting background stories that we eventually learn of.

The best bit is that the storytellers have no qualms about revealing crucial bits of the plot every week. Unlike dramas where the main plot only unravels in the last two episodes of the show, the drama manages to amaze viewers with some major reveal each week, thus gripping us, even more, each time. Other show makers (we are looking at you Team Dobara) need to learn from Sang-e-Mah how to keep a show crisp and keep audiences from losing interest after episode 10.

It is hard to say that Sania Saeed has outdone herself because she manages to do it so often. We look back at her body of work and one after another her iconic roles keep piling up before us. Most recently, we were singing praises for Hajra in Raqeeb Se, where she was this timid, devoted wife who dotes on a husband she thinks is in love with someone else. Here, as Zarghunah, we see a fiery rebel who has refused to follow her tribe’s custom, refused to cover her head, refused the man who killed her husband his freedom and refused to back down even when the odds were not in her favour. Not many actors are capable of showing such skill on screen, not many actors manage to successfully avoid being type-cast in roles and yet, Saeed does it with utter grace.

The only male actor that can mirror Saeed’s prowess is Naumaan Ijaz and does he manage to do justice to his role as Haji Marjan! 10 episodes down the road, we still can’t tell if he is a good man or not. We know he loves his wife, we know he loves his son, we know he once loved his stepson dearly, but we do not know if he is, indeed, a murderer. He seems nice but then he does something borderline shady and we doubt him, then he does something nice again and we do not know what to think anymore!

It is good to see Zaviyar Naumaan being put to good use on the show. After his lackluster performance in Qissa Meherbano Ka, we were glad to give him another chance and are happy to report that the young man can hold his own while facing off with an actor as legendary as his father. There are scenes, especially the one in which he jumps into a stream after finding out a family brought a proposal for Gulmeena, or when he goes to talk to Hilmand where Zaviyar truly does his father proud on screen.

If we were to get into the nitty-gritty of it, we would say that accents on the show are all over the place. Sometimes the actors have thick accents, other times they don’t. While most of the cast also looks like they belong to the northern regions, Atif Aslam and his cronies stand out because of their skin tone and the thick Punjabi-laced accents. Moreover, in some scenes, Aslam seem to be a little bit lacking when it comes to acting, but in others, he does a fantastic job. But to his credit, this is his first attempt at a lead role and the character he plays is extremely difficult to nail.

The production quality of the show and the fact that no one but the makers of the show can truly say how the story will end are the reason why the show has quickly garnered such a wide audience. Will Hilmand die? Will the enmity between the two sides of the family continue to fester? Will Haji Marjan be murdered? Will Gulmeena and Hikmat end up together? And what of Sheherezad who has hopelessly fallen in love with Hilmand? All of these questions have ensured that viewers continue to watch the show every Sunday.