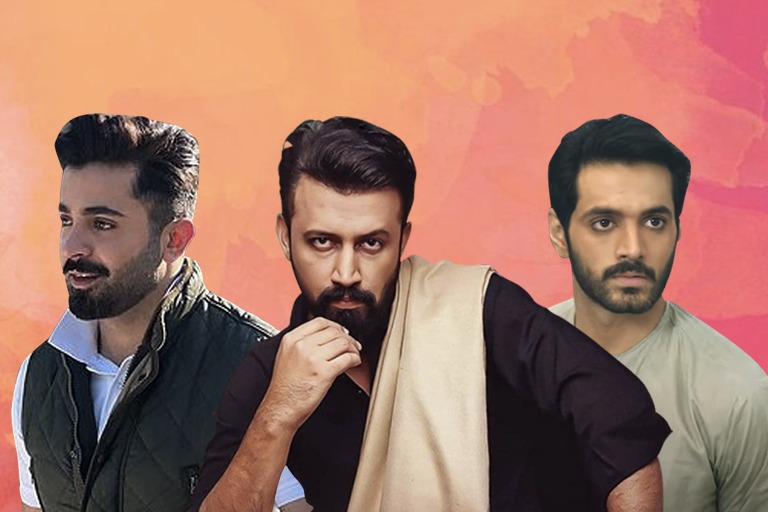 KARACHI: Having a variety of dramas to choose from naturally means our audiences also get to see numerous actors grace their television screens on an everyday basis. While some actors get lost amongst the pool of talent, a few manage to stand out. Be it their acting skills or the characters they choose, certain actors have a bigger fanbase than the rest. Of course, we have our favourites too. Here are five Pakistani male actors that currently have our attention.

Few could have expected Atif Alslam to be on the list of one’s favourite Pakistani male actors. The superstar has entertained us with his beautiful vocals for nearly two decades. For him to grace our screens as Hilmand in the recent drama serial Sang-e-Mah is nothing less than a pleasant surprise. Aslam’s character is unorthodox, fairly challenging for any actor. Yet, Aslam has managed to stand his ground against A-list actors including Sania Saeed and Nauman Ijaz. Hilmand is very different compared to the singer we have known for years. With his drama debut, Aslam has once again proven how an artist has no boundaries and that he is willing to experiment with his talent.

We always love men who are allies of women. And Major Usama from Sinf-e-Aahan is one such man. He specially left a mark on audiences with the story he narrated to his daughter. Teaching her to be her own hero instead of waiting for a prince to come save her, Major Usama proved how big of a role fathers play in framing children’s mindsets. Sheheryar Munawar does not only display the softness and patience it takes to explain things to a child, he also transforms into a strict yet kind leader in front of the female Lieutenant Colonels.

Wahaj Ali is definitely one of the most underrated actors of the Pakistani drama industry. Having landed lead roles in dramas like Dil Na Umeed Toh Nahi, Ali is back to impress audiences with his portrayal of Rumi in Jo Bichar Gaye. The drama has a risky and sensitive storyline as it deals with the partition of East and West Pakistan while Ali takes on the role of a Bengali. From his accent to his body language, Ali proves the range he has an actor. Be it the role of a chocolate hero or the leader of a nationalist movement, the actor seems ready to deliver his best each time.

When listing down one’s favourite pakistani actors in recent times, Bilal Abbas Khan is sure to be on the list. Be it movies or dramas, Khan leaves his audiences impressed each time. His character in ongoing drama serial Dobara is yet another unconventional role. Mahir is a young man deprived of love and attention. Belonging to a broken family, he struggles emotionally and financially. Until he meets Mehru (played by Hadiqa Kiani) and the two begin to develop feelings for each other.

What is particularly admirable about Khan’s acting in Dobara is how effortlessly he transitions from a carefree boy tired of his circumstances to a mature man who knows what he is doing. Even as a helpless individual, Mahir finds humour in every situation and Khan aces every dialogue that is meant to be self-deprecating.

Being able to make your audiences hate you is a whole different ballgame. One that Ahsan Khan as Murad seems to be acing. His character in Qissa Meherbano Ka is one of the most vile ones we have seen in a long time. From raping his wife to attempting to burn her alive, Murad’s cruelty knows no limits. Even though the masses might hate him, it is nearly impossible to ignore Murad. Being one of the most seasoned male Pakistani actors, Khan proves once again how he is not only here to play characters that are safe and likeable. To be able to hate a character while commending the actor is an indicator of how talented Khan truly is.