Cast talks about film, television and their relationships with each other 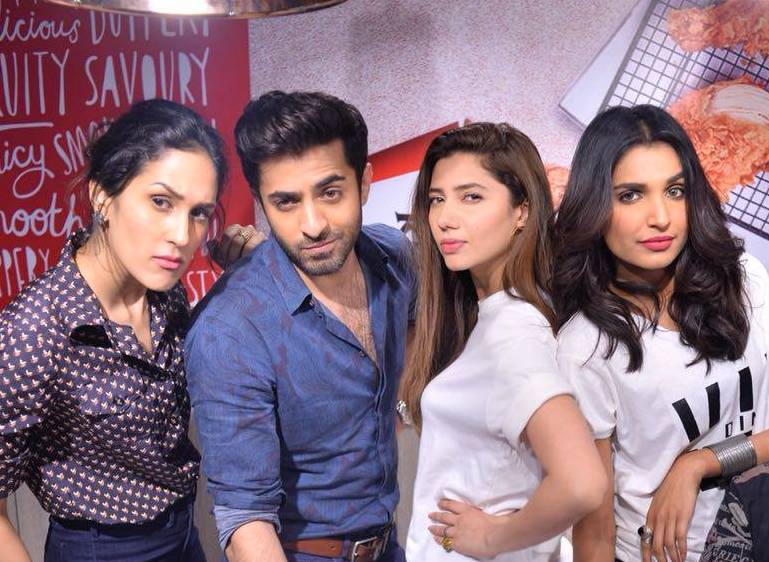 KARACHI: Much like any other film, 7 Din Mohabbat In’s promotional tour came to an end a few days before the release of the film. The lead stars Mahira Khan, Sheheryar Munawar, Amna Ilyas and Mira Sethi made their way to their last public appearance before the film’s premiere to speak to the press about their last thoughts on the film and on working together.

WE WERE HANGING OUT WITH AMNA ILYAS AND MAHIRA KHAN. Jk. We met them at a blogger's meet to talk about their film 7 Din Mohabbat In. @mahirahkhan @aamnailyas #7dmi #eidreleases #mahirakhan #amnailyas

Munawar, who has worked with Khan several times before, took the opportunity to talk about his experience working with the other two ladies of the film, Ilyas and Sethi. “What I realised after working with Ilyas is that even though she appears to be very bad ass and tough, she’s actually quite a sensitive person,” he said, at which Khan immediately enveloped a blushing Ilyas into a bear hug. “If I had to choose a word for Sethi, it would be endearing,” he shared after giving it a lot of thought.

But in between all the fun and jokes, Sethi pointed out that creating comedy is tougher than it looks and it requires one to be extremely vulnerable. “It may seem as though actors are being vulnerable when they’re crying on screen but it’s the opposite. We are more vulnerable when we attempt to do comedy because it requires us to get out of our comfort zone. We have to act silly and sometimes make silly expressions. It’s a lot more difficult than it looks,” she concluded.

Read:Women are no longer tolerating things they once used to: Mahira

Before the press could ask, Khan jokingly pointed out that everyone had reminded her that she was attempting comedy for the first time after doing dramatic roles. “I know I know, I usually do roles in which I cry a lot.” But the real challenge for Khan isn’t attempting a new genre but to bring people to the cinemas. “My first role was in a film (Bol) but my heart belongs to television. I simply love the medium. But the biggest difference between film and television is that the latter is free. People don’t have to make an effort to watch you perform. With films, you have to bring people to the cinemas where they’ll be spending money on a ticket just to see you on screen. So you have to justify that and make sure your work is strong enough,” she concluded.

While the film will hit the cinemas on Eid, the premiere took place yesterday. Noted film critics have been lending positive reviews so far.