With nearly 80 serials produced this year, here are five dramas we thought managed to stand out with their storylines and performances 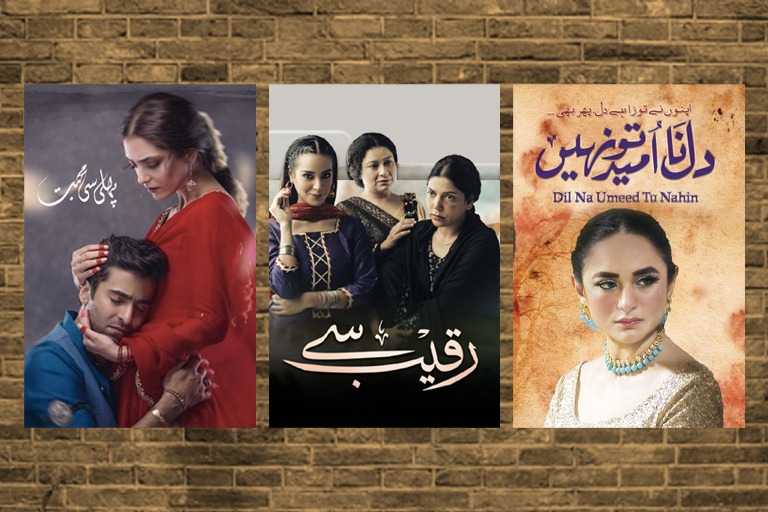 KARACHI: While the world may be going digital, primetime television is still a major part of our routines. In most Pakistani households, watching TV together is considered a family activity with the 8 pm dramas being major contributors towards entertainment. With nearly 80 dramas released over the year, it is hard to keep track of or fully appreciate each production. However, as 2021 comes to an end, we have managed to shortlist five Pakistani dramas which we thought truly stood out this year.

Our favourite lead performances of 2021

This drama had audiences excited from the get-go. With an OST that people could not stop singing to the return of Maya Ali and Sheheryar Munawar on television, fans had much to look forward to. The storyline also did not disappoint as it narrated a story of love and loss in a manner that tugged at the audience’s hearts. Faiza Iftikhar complemented the cast with truly impactful dialogues, most of which were delivered by Nargis, a character brilliantly portrayed by Rabia Butt. As yet another pleasant surprise, HSY marked his television debut with Pehli Si Muhabbat and added an interesting layer with his character. The serial may have gone on for a little longer than expected but the team managed to give audiences a realistic and heartwarming end, making the show worth watching.

Aakhir Kab Tak might just be our favourite drama of the year. From impeccable performances to the gripping storyline along with the social messages that the drama delivered, we loved the show for more than one reason. We got to see Srha Asghar, Azfar Rehman and Juveria Abbasi deliver some of the best performances of their careers and take centre stage in the drama. In the form of Noor (Ushna Shah), we saw a sister and woman who was fearless and ready to fight till the very end. Nasir (Adeel Hussain) and Saim (Haroon Shahid) proved that there is still hope for the men of our society and that some of them truly are allies of women. The drama made an attempt at removing the taboo attached to rape and putting an end to victim blaming. Aakhir Kab Tak may have been an underrated project this year but the storyline is a timeless and definitely an exemplary one.

Perhaps one of the most underrated dramas of 2021, Dil Na Umeed Toh Nahi might not have been a popular choice for many drama enthusiasts this year. Since it did not air on any of the three big entertainment channels, some might have missed out on the masterpiece that it was. Starring Yumna Zaidi and Wahaj Ali, both of whom impressed with their acting, the drama touched upon topics like human trafficking and child labour. Produced in collaboration with Kashf Foundation, Dil Na Umeed Toh Nahi took a risk that many storytellers are afraid to take in our part of the world specially when it comes to holding up a mirror to society. Paired with commendable performances, the project was definitely one of the best produced this year.

Featuring an incredible cast including Noman Ijaz, Sania Saeed, Iqra Aziz, Faryal Mehmood and Hadiqa Kiani, Raqeeb Se was a treat to watch. The drama did not pick up ratings and may have been slow for most part of the audiences, it truly was unconventional in its treatment of characters and plots. The conversations between a man (Maqsood Sahab) and his ex lover (Sakina), while his wife (Hajra) is equally aware of it. How a father (Maqsood sahab) encourages his daughter (Insha) to experience life’s harsh realities herself and realize what’s good for her. Noman Ijaz truly won our hearts with yet another effortless performance while Hadiqa Kiani was impressive despite her acting debut. Brilliantly written by Bee Gul and directed by Kashif Nisar, Raqeeb Se certainly brought together the best our industry has got.

This drama held up a mirror for our society from episode 1. Based on Parizaad, a dark-skinned man who is treated as an outcast because of his physical appearance, the team was initially criticized for casting Ahmed Ali Akbar as the lead and changing his skin tone. However, Akbar proved just how perfect he is for the role and delivered the best performance of his career so far. Through Parizaad’s character, we also see how people tend to exploit submissive and down-to-earth individuals. We also see how a man like Parizaad can be loyal to his last breath but also see things for the way they are. Even when his social and financial status changes, his nature does not. Nor does he lose his ability to judge people like Naheed who love his wealth more than the person that he is. Annie, brilliantly essayed by Yumna Zaidi, allows us to see how love sometimes truly can be blind. The drama may have gone on for a little longer than some would have liked, but it would definitely be interesting to see how the serial wraps up.