Our favourite lead performances of 2021

Out of the many actors who graced our television screens this year, these individuals stood out with their challenging characters and remarkable performances 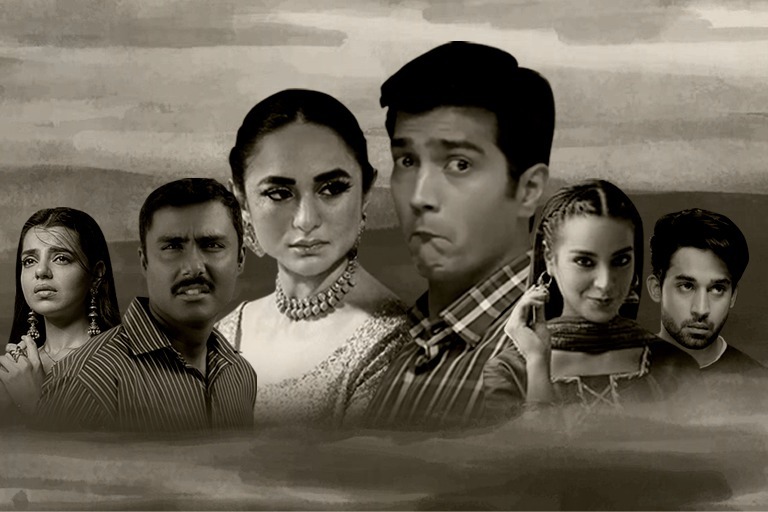 KARACHI: The last year was not any easier than 2020. With COVID-19 still a threat across the world, artists struggled to create and deliver content. However, as the situation eased up a little and restrictions were lifted, the local drama industry was one of the fastest to bounce back. Amidst hectic schedules and a virus to battle, pakistani actors and directors delivered their best and presented some masterpieces to their audiences in 2021. Television saw the return of some of its favourites including Sheheryar Munawar, Maya Ali and Mahira Khan. However, here are the actors who truly stood out with their performances in lead roles this year. These artists not only performed brilliantly but rose up to the challenges that each of their characters presented.

Playing the role of Ameera, Iqra Aziz fulfilled the role of Hadiqa Kiani’s daughter in Raqeeb Se. Ameera is mischievous, confident and very well aware of her surroundings. She may be a teenager (a role that Aziz fits into perfectly) but she is not ignorant of her mother’s past or the reason behind her father’s behaviour. Ameera has the courage to speak the truth when her mother cannot. She holds her mother’s ex suitor, Maqsood (played by Nauman Ijaz), accountable for the life that she has lived ever since they parted ways.

Ameera did remind us of Iqra’s character in Ranjha Ranjha Kardi particularly because of her aggression and ambition and how she is not willing to give up on her dreams. But as her character transitioned, we witnessed fresh layers to it.

If there was one actor who pleasantly surprised us in 2021, it was Shahzad Sheikh. Inspite of being in the drama industry for a few years, most of Sheikh’s work had gone unacknowledged or failed to stand out. This year, however, the actor proved just how capable he is with his role in drama serial Phaans. The drama itself stood out with its progressive narrative against rape. Phaans taught audiences how to support survivors of rape and portrayed strong women in the form of Zeba (Zara Noor Abbas) and her mother Shakeela (Kinza Malik). Sheikh took the cake with his portrayal of Saahil. A neurodivergent individual, Saahil has gone through childhood trauma that makes him socially reserved and often scared of new people and situations. Sheikh brought his character to life with his facial expressions and hand movements. However, the biggest twist in the story and an aspect which proved Sheikh’s range as an actor was when it was revealed that Saahil has been faking his condition all along. A criminal in real life, Saahil pretends to be mentally sick to remain clear of all suspicion. His transformations from an innocent Saahil to a perpetrator in the drama are truly scary yet brilliant.

Yet another sensitive topic at hand, Dunk chose to look at sexual abuse from a very different lens. The drama also initially met with criticism for narrating the story of a false allegation against a man in a country where survivors of sexual assault are seldom believed. However, there is no denying that the serial featured some brilliant performances from its cast, including Bilal Abbas Khan as Haider. Haider is Amal’s (Sana Javed) fiance and also the reason why the latter falsely accuses Professor Humayun (Nauman Ijaz) of sexual abuse. Like any partner, Haider blindly believes and defends his fiance and goes to many extremes to seek revenge from his professor. Only to find out that Amal had been lying all along.

The guilt, shame, disbelief and utter horror that Haider experiences once he believes himself to be responsible for Professor Humayun’s death is perhaps something that only Bilal Abbas Khan could have portrayed as flawlessly as he did. The constant battle that Haider fight to keep Amal’s dignity intact even after knowing the truth is heartbreaking yet commendable. Even when his character was lost at words, Khan’s eyes did it all for audiences.

With a number of pakistani dramas addressing the topic of sexual abuse and the taboo attached to it in 2021, drama serial Aakhir Kab Tak stood out in its brave and realistic portrayal of survivors of sexual assault and the trauma that follows. Aakhir Kab Tak also accurately highlights how criminals are often people we know and are closer to us than we think. Srha Asghar delivers more than what was expected of her as one of the lead characters. Fajr is the younger of two sisters whose mother has always taught them to stay quiet and father would much rather have a son. Fajr has not only witnessed her mother being verbally and physically abused by her father but also lives in fear of her cousin, who harasses her in her very own house. Fajr is then raped by her tutor Zafar (Azfar Rehman), a secret that only comes out after Fajr takes her own life.

Srha Asghar encapsulates the utter fear in which survivors of rape live. She is unable to sleep, eat, be around other people. Already a shy and scared girl, the incident shatters her personality. For a long time, she is unable to trust her own husband. Just when she starts to open up to him and begin her journey towards a happy life, Zafar shows up at her house, this time as her husband’s cousin. Fajr becomes an example of how survivors of rape are punished more instead of criminals in our society. When Zafar continues to torture her in her own house, Fajr finds it easier to take her own life than live with her husband and his family knowing the truth about what happened with her.

Yet another actor to pleasantly surprise audiences with his performance this year was Ahmed Ali Akbar in Parizaad. Initially criticised for painting a fair-skinned actor instead of hiring someone with naturally dark skin, the drama is about a man, Parizaad, who is treated as an outcast because of his physical appearance. Ahmed Ali Akbar, however, stands out not just because of his complexion but his overall body language and posture. Fitting into the role of a submissive and shy man, Akbar keeps his shoulders hunched and gaze low throughout the drama. Even when Parizaad becomes a wealthy man (a development that may be unrealistic for many viewers), his body language and speech remain the same. He may dress better but as a person, he is still the same down to earth individual that he always was.

Ahmed Ali Akbar proves his range as an actor with Parizaad. He makes his character believable to the extent that viewers forget what the actor’s actual skin tone is and just how articulate he is in real life. Akbar breathes life into his character with his emotions, expressions and dialogue delivery.

Having won two trophies at the Lux Style Awards this year, Yumna Zaidi once again showed her range as an actor in Dil Na Umeed Toh Nahi. Yet again, with a sensitive topic at hand, the drama garnered immense acclaim not just for the narrative but due to some commendable performances including that of Yumna Zaidi. The incredibly talented actor brilliantly portrayed how a young woman with so many trials ahead of her makes her way out. She has been very convincing as Allah Rakhi throughout the drama, as her character evolved and crossed paths with multiple individuals who looked at her in different dynamics. Currently, Yumna Zaidi is winning hearts with her roles in Parizaad and Ishq e Laa. She’s certainly a treat to watch on the small screen.