Expected to go on air this month, the first glimpse at the drama comes through in pictures of Sajal Aly and Kubra Khan in army uniforms 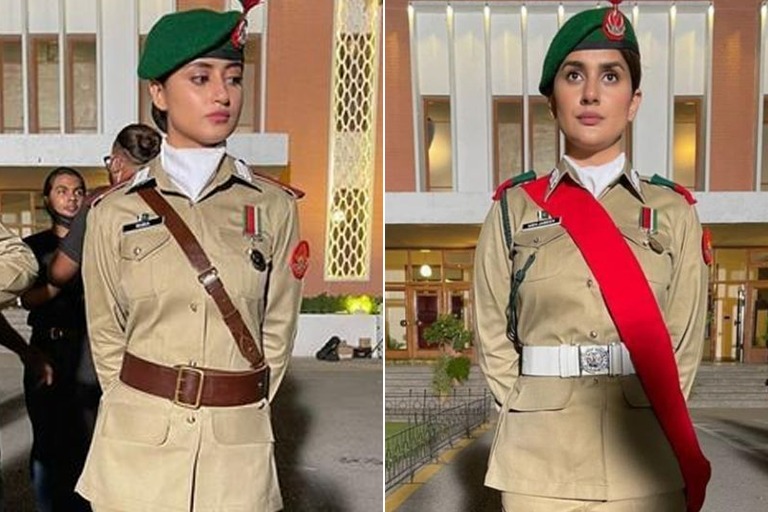 KARACHI: Drama serial Sinf-e-Ahan has been slowly but gradually creating hype amongst its audiences. While the project was introduced to us as a female-centric narrative featuring Sajal Aly, Kubra Khan, Yumna Zaidi, Ramsha Khan and Syra Yousuf, more details of the project are being revealed as the days pass by. Only recently, Usman Mukhtar announced that he is also a part of Sinf-e-Ahan while Sheheryar Munawar and Ali Rehman are said to star in the drama as well.

Expected to air in September, audiences have finally caught a glimpse of what the drama and its characters have to offer. To add to fans’ excitement, the first look features none other than Sajal Aly and Kubra Khan. Pictures shared on Instagram show the two dressed in army uniforms. With Sinf-e-Ahan translating into ‘women of steel’, it is no surprise that the story potentially revolves around women in the military.

Other than the female leads already introduced to audiences, model Meruub Ali has also confirmed her involvement in the drama with the project marking her television debut.

Sinf-e-Ahan has been written by Umera Ahmed and directed by Nadeem Baig. The project has been produced by Humayun Saeed, Samina Humayun Saeed, Shahzad Nasib and Sana Shahnawaz in association with ISPR.