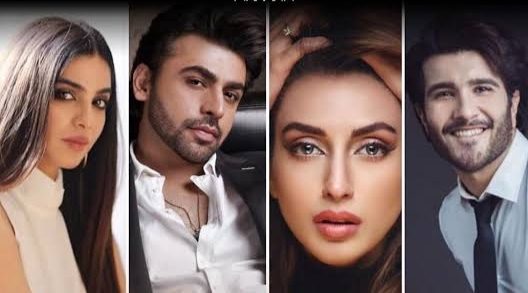 KARACHI: Pakistani film Tich Button was scheduled to release on Eid ul Fitr 2020 alongside The Legend of Maula Jatt. Director of Tich Button, Qasim Ali Mureed was in fact planning to release the trailer. However, it did not materialize due to the coronavirus pandemic. While they are still uncertain of the new release date, they recently flew to Lahore to shoot a remaining song. Qasim Ali Mureed shared a picture from Jinnah International Airport, Karachi.

“We are shooting a song near Lahore featuring Sonya Hussyn, Iman Ali, Farhan Saeed and Feroze Khan,” the director informed Cutacut. “We were about to film our last song before the pandemic hit but couldn’t shoot it due to the Covid situation. It is a beautiful song and you will like it when you hear it. We are left with just four days of shoot after which our camera will be completely closed.”

The first teaser of Tich Button featuring the lead cast released in February this year. It packed quite a punch with the right amount of action and romance and generated applause from viewers and critics alike.

In addition to the film, the team of Tich Button has lately been busy with other projects too. Sonya Hussyn is featuring in drama serials Saraab and Muhabbat Tujhe Alvida. Meanwhile, Qasim Ali Mureed’s drama Prem Gali is presently on-air and features Farhan Saeed in a key role. Feroze Khan, on the other hand, is launching an organization for harassment support.

Tich Button also marks Urwa Hocane’s debut as a producer. And this makes her the youngest female producer in Pakistan. Currently starring in drama serial Mushk, she informed Cutacut that given the uncertainty around us, she is unsure of the release date of the film as yet. Not to forget, director Nabeel Qureshi has announced releasing Quaid e Azam Zindabad later this year. This will make it the first film to release in cinemas post-pandemic. Let’s wait and see!