This time, it's the men who are in the kitchen 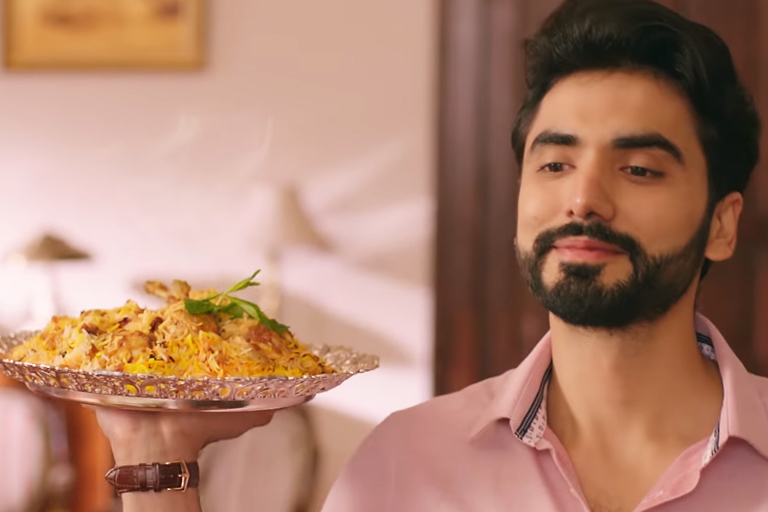 KARACHI: Given the amount of misogynistic and mindless content we consume everyday, it is safe to say that the new Shan ad seems to have gotten almost everything right. The brand’s new #OneBiryaniOneFamily campaign is a breath of fresh air without any hints of toxic masculinity.

There’s no woman in the kitchen who is trying to win hearts through her cooking neither is anyone having palpitations after sipping a cup of tea. There’s no unnecessary jingle playing in the background to add tadka to an otherwise pheeka ad. Overall, the ad has been produced pretty well and the message is quite crisp. Yes, of course, there is that stereotypical Karachi vs Lahore twist but that too is all in good fun without offending anyone.

Sometimes perceptions can blind us to the truth, but Sacha Zaiqa goes straight to the heart! Witness how hearts are won in this epic encounter between Saalay and Daamad.The most anticipated campaign of the year is finally here! Press play#OneBiryaniOneFamily #SachaZaiqa

Here are a few of the many reasons we love the ad:

1. The damaad is seeking approval and not the bahu

One of the major reasons this ad strikes all the right chords is its depiction of gender dynamics. It is so refreshing to see that it may have taken us quite long but we are finally there. It’s 2018 and we are more than okay with seeing a man cooking for his in-laws instead of it being the other way around. The damaad-to-be of the family doesn’t make a good impression on his brother-in-laws but manages to win their hearts at the end. Is that a tear in my eye?

2. The treatment of the whole ‘men don’t cry’ aspect

The first few minutes of the ad were a little annoying, I won’t lie. Especially when the Karachi boy is being bullied with the sole purpose of making him cry. What’s the big deal if he cries? But turns out that the bullies are actually the ones who are unable to contain their tears at the end. Sweet!

3. The equation between the father of the bride and the potential son-in-law

There are no death stares or snarky comments made between the duo. There are no corner meetings happening where the girl’s father is trying to pay the guy off so he would leave his daughter alone. Instead, he welcomes this guy whom his daughter has chosen for herself with open arms and gives him a fair chance.

4. The acceptance of children choosing their own partners

The whole love/arrange marriage is also well-played in the ad. The Karachi boy isn’t coming to meet his girl’s family with his parents to ask her hand in marriage. He’s coming alone, which shows that he is the girl’s choice and she merely wants her family to like him too. And he’s trying everything in his power to make that happen.

5. The Karachi vs Lahore angle

When it comes to biryani, the only discussion you expect to be shown on television is which city has the best biryani. (And we all know who wins that competition but that’s besides the point.) In this particular ad, there was none of that. It was just a simple idea about how their aunt would make really good biryani and the damaad sahab manages to pull it off. Yes, they’ve shown that distinction between the way they’re dressed and everything but that can be overlooked.

All in all, the ad is a perfect release for 2018 and seems promising. Could this be the start of a new era of progressive ads? Let’s see.

Until then, I’m going to leave you with this poster.