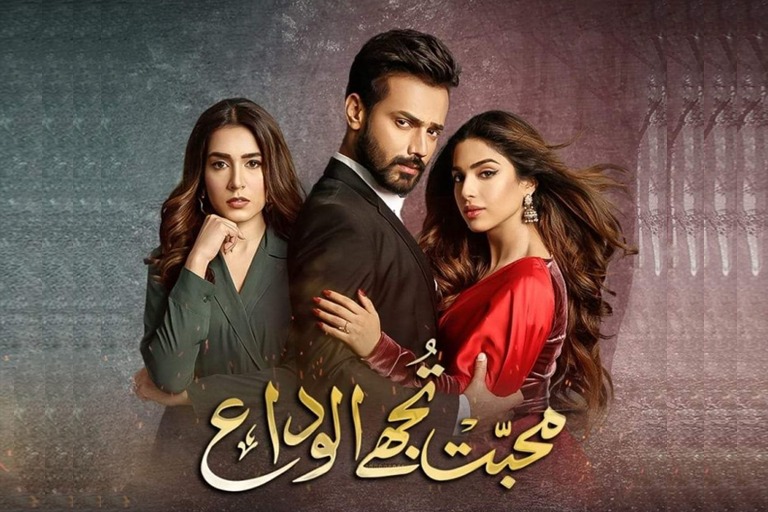 KARACHI: First aired on 17th June, Muhabbat Tujhe Alvida started off with a promising cast. With Sonya Hussyn, Mansha Pasha and Zahid Ahmed in lead roles, the fans looked forward to an interesting production. While the serial does stand out from the rest, it is not for the reasons that many would have expected.

Written by Abdul Khaliq Khan, the story revolves around a middle-class couple, Shahan and Ulfat (played by Zahid Ahmed and Sonya Hussyn respectively). Ulfat dreams of being rich and would go to any lengths to be so. Pasha plays the role of Shafaq, Shahan’s boss, who is also in love with him. Over the duration of the drama, Shafaq and Ulfat’s friendship blossoms as they bond over all the luxuries that the former has. Eventually, Shafaq is able to bribe Ulfat and convince her to let her marry Shahan.

While Ulfat is hesitant at first, for she does love her husband dearly, a neighbour makes her realize what she could be missing out on. She reminds Ulfat how common it is for men in our society to have multiple wives. And to be able to gain wealth during the process would be a win for all.

Surprisingly, that was not even the most ridiculous thing to have happened. Once Ulfat casually asks Shahan to marry Shafaq out of empathy and the man downright says no, a whole chain of events is kicked off where the wife emotionally blackmails her husband, refuses to speak to him, leaves the house and blames it on his ‘ego’.

If one remembers watching the Bollywood flick Judaai, starring Sri Devi and Anil Kapoor as the middle class couple and Urmila Matondkar as the rich woman seeking Kapoor’s affection in exchange for money, then they’ll realize that this drama and the Bollywood film have pretty much the same premise.

A post shared by Lollywood Superstars (@lollywoodsuperstars) on Aug 7, 2020 at 1:59am PDT

To take the manipulation to a whole new level, Shafaq pretends like she knows nothing of the matter when Shahan shares his concerns with her. Her job was done once she offered the money to Ulfat. When she eventually does confess her feelings to her employee and he, once again, clearly refuses to marry her, she begins persuading him, even begging him to change his mind. Last time I checked, this fell under workplace harassment specially given the office environment where this is happening.

The victim blaming does not end here. The last episode aired even has a scene with Shahan’s friend telling him “tujh main salahiyat hi nahi hai pyar karne ki” (you are not capable of love) simply because he does not want to make Shafaq a part of his life.

In a society where women are often labelled as gold-diggers, how is the team behind Muhabbat Tujhe Alvida contributing towards the narrative? Does the drama want to normalize manipulation, gas lighting and harassment? While our people are still trying to learn the meaning of consent and understand that no means no, MTV seems to be adamant on teaching its audience the art of persuasion. With productions like Ishqiya released not long ago with strong female protagonists , the Hum TV serial falls far behind in the process of creating progressive content.