Our favourite performances of 2022 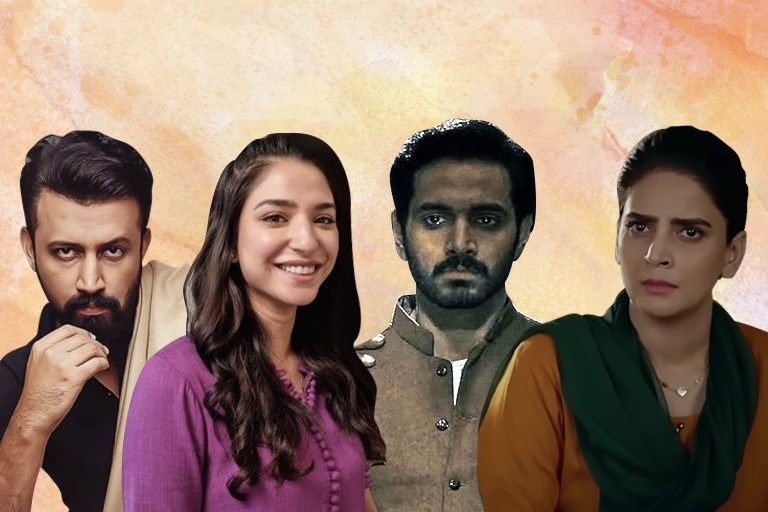 KARACHI: As the year comes to an end, we have already listed down our favourite dramas from 2022. But is it even fair to wrap up a year without acknowledging the talent that it gave way to? With strong storylines and stunning direction, our dramas this year also brought to surface some truly impressive performances, sorting our list for top Pakistani actors for 2022 just right. Keep reading to find out who we thoroughly enjoyed watching on our TV screens this year.

Comedy is not everyone’s cup of tea, specially when it is a drama that only airs for one month. However, though Hum Tum might have only been a Ramadan special, Ramsha Khan made sure that her portrayal of Neha would be remembered for far beyond that. Neha was ambitious, intelligent and fearless. However, she also had a softer side to herself which would come out when she would get protective of her family. Combined with all of this was the constant battle that she had going on with her neighbour, Adam Sultan. Not only was Ramsha Khan’s onscreen chemistry with Ahad Raza Mir praised by many, Khan’s comic timing further proved just how easily she is able to pull off roles that are not the simplest.

There is no denying the fact that Yumna Zaidi is one of the best actors our industry has to offer at the moment. You give her any role and she will execute it with an effortlessness only known to her. Her role in the women-centric serial Sinf-e-Ahan was no less of an inspiration either. Shaista belonged to a conservative family in Peshawar. Though super intelligent, girls from her community are married off before they can even think of making a career for themselves. Going into the army is unimaginable altogether. However, Shaista breaks all barriers as she goes after her dreams. She also eventually wins over her father and grandmother, two people who opposed her admission the most. At the training, Shaista continues to be a source of positivity, humour and perseverance for her fellow Lieutenant Colonels and audiences alike. Not only was Yumna Zaidi’s innocence a breath of fresh air in the drama but the command which she had over her Pashtun accent was also commendable. Zaidi has also been impressive in her ongoing drama Bakhtawar.

Wahaj Ali could very well be the chocolate hero of our industry in recent times. No one does romance the way he does. However, with his role in Jo Bichar Gaye, Ali proved that he is ready to wear any cap that might fit him. Rumi was in stark contrast with any other character that Ali had played so far yet, he delivered with excellence. A passionate freedom fighter who is in love with his cousin who supports the opposition, Rumi experiences loss and bloodshed he was not quite ready for. From nailing his Bengali accent to conveying the passion and desperation that his character needed, Wahaj Ali as Rumi was a treat to watch.

With someone as dominating as Rumi occupying our screens, one would think that there would be little room to pay attention to anyone else. However, Talha Chahour proved otherwise as he demanded to be noticed. Making his tv debut with Jo Bichar Gaye, Chahour stood his ground against the likes of Wahaj Ali and shared a beautiful chemistry with Maya Ali. Captain Farrukh provided just the right amount of calmness and stability to the drama that was needed to balance Rumi’s energy while the underlying love triangle between the three main leads was also captivating to witness.

Yet another tv debutant who left us pleasantly surprised, few could have expected Atif Aslam to be on the list of one’s favourite actors in 2022. The superstar has entertained us with his beautiful vocals for nearly two decades but this year, he graced our screens as Hilmand in Sang-e-Mah. Aslam’s character was unorthodox, fairly challenging for any actor. Yet, Aslam managed to stand his ground against A-list actors including Sania Saeed and Nauman Ijaz. In stark contrast to the musician we have known for years, Hilmand was stubborn, aloof, heavily sarcastic and hellbent on seeking revenge for his dead father. However, he also had a softer side to himself that only a select few get to see. With his drama debut, Aslam once again proved how an artist has no boundaries and just how much he is willing to experiment with his talent.

Be it listing down the best films of the year, the best dramas or the best performances, Saba Qamar has to be a part of the list. Each year, the actor delivers numerous projects for her fans to choose from and 2022 has been no different. Simultaneously working her magic on the big and small screens, Saba Qamar’s Fraud has been one of the most important dramas of the year. Her character, Maya, is obedient towards her parents but does not lack opinion. She is talented, ambitious and knows how to get her voice heard without having to scream. In the more romantic moments, she also allows herself to feel the newly found happiness but does not lose touch with reality either. Most impressive is the fact that even though she has been robbed of her happiness and wealth, both, by Shujaat, she is not ready to back down. Maya is ready to become a symbol of hope for other girls and fight the evil even if it means that she has to stand alone.

When you have someone as talented as Saba Qamar playing the protagonist, you need an equally powerful antagonist as well. And that is exactly what the powerhouse that is Ahsan Khan delivered with his portrayal of Shujaat in Fraud as well. Shujaat is any girl’s nightmare. Dressed to the nines, seemingly living a comfortable life, with words flowing like honey out of his mouth, Shujaat is the biggest fraud of all. Together with his gang, he traps families and marries their capable daughters, only to abandon them after taking possession of their wealth. Of course, swindling multiple families means he has to keep switching cities and appearances as well. And no one to better take on multiple facades than Ahsan Khan who goes from the cunning mastermind to the sweetest Shajji in the blink of an eye. And there is something about the actor that will convince you of his intentions in both scenarios.

An actor’s true talent comes out when they are able to convince audiences of a character whose aura is very different from their own. Hania Aamir as Hala in Mere Humsafar beautifully depicted the fear, trauma and lack of confidence that a person with absent parents and an abusive aunt experiences. Otherwise known to have a cheerful personality packed with confidence, Aamir’s tone was hushed for most of the drama. She would whisper, flinch at the slightest sign of danger. However, with the help of her husband, Hala grows into a more confident woman who has the courage to speak her truth. She turns into someone who has dreams, wants to learn new things and even trust new relationships. Hania Aamir as Hala was able to tug at the heartstrings of so many viewers who empathized with her character.

It feels almost amateur to name Sania Saeed amongst our favourite performers of the year. Having been a master of her craft for decades now, of course there is no one like her. Neither is there anyone like her character from Sang-a-Mah. While one may expect women in the drama to be portrayed as helpless victims, given its storyline, Zarghuna’s character shatters all such assumptions. Brilliantly portrayed by Sania Saeed, she needs no man to protect herself or her daughter. Be it riding a horse, hunting animals, or going after men who exploit women, Zarghuna does it all. She is a woman who can stand her ground and instills the same teachings in her daughter as well. She is a woman who demands to be respected, and it is the same respect that Saeed demands as an artist as well.