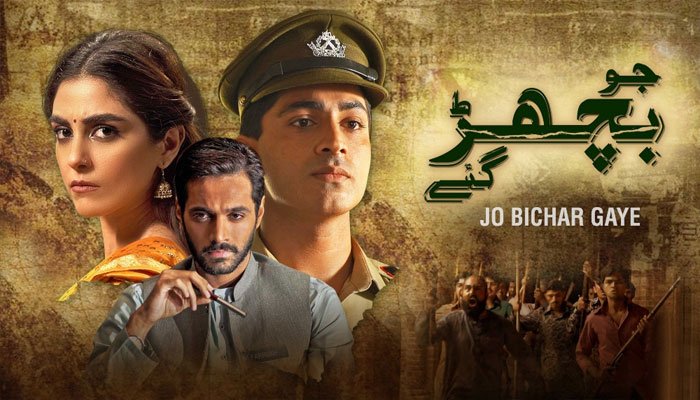 KARACHI: Not often do we find ourselves faced with difficulty when trying to find flaws in a Pakistani drama. There are plenty of them and are usually glaringly obvious. But then, once in a while, a show made entirely in Pakistan, by a Pakistani production house, with a Pakistani writer and Pakistani actors leaves us in awe and we have nothing but good things to say about it. Drama serial Jo Bichar Gaye happens to be one of these shows.

Based loosely on the memoirs of Colonel Z.I. Farrukh, the drama is written by Ali Moeen and directed by Haissam Hussain. Safe to say, the duo has given the rest of the industry a masterclass on storytelling.

While the drama takes place in the turbulent times before Bangladesh’s emancipation, the beauty of the story lies in the fact that at its core is a story about human emotions. The story, set in East Pakistan, takes us through the events that led to the eventual creation of Bangladesh. We are introduced to Rumi (Wahaj Ali), a fiery student leader at Dhaka University who believes that East Pakistanis are being shortchanged on their rights and the only solution to it is separation from West Pakistan. He is, however, an idealist who wasn’t quite prepared to face the loss of life and bloodshed attached to the call for a separate country.

We see Sonya (Maya Ali), Rumi’s cousin and also a student of Dhaka University, oppose the talk of separation while she raises her voice against the mistreatment and eventual murder of some West Pakistani students at the university.

Captain Farrukh (Talha Chahour) is an officer from West Pakistan who, after being newly stationed at Dhaka, is baffled at the situation he witnesses. On one hand he sees Bangali civilians ready to start an uprising. On the other, he knows that Bangali officers within their ranks are running a full-blown conspiracy to start civil war and emancipate East Pakistan into Bangladesh. The underlaying romance and love-triangle between Captain Farrukh, Sonya and Rumi is also refreshing.

Other characters in the play include Shill (Omar Cheema), Rumi’s peer and a student leader who has no problem in using violence to get his separate homeland. There is Professor Ajeet (Usman Zia), a brooding character who first grooms Rumi as a future leader but then abandons him and backs the likes of Shill when he sees the former has no stomach for violence.

Hearing about it, one would assume that events like the Agartala Conspiracy or the uprising in East Pakistan would weigh a viewer down and be a very dry watch. But that is certainly not the case. The delicacy with which human emotions and connections are shown is remarkable to the point where one feels like they were actually present in the moment when history unfolded.

Not one scene in the show is wasted, everything we see has a purpose, a meaning. It has thrill, action, suspense, romance. It also has inexplicable grief and loss and viewers get to experience all of these emotions and then some.

One could write a whole different article about the kind of acting we have witnessed in Jo Bichar Gaye but to briefly admire the entire cast, one would say that not one actor has done a bad job.

Wahaj has outdone himself as Rumi, putting any apprehensions one had about his range as an actor to ease. Moving forward, the actor should be selective about the roles he plays and casting directors should be mindful of his acting talents, not try to typecast him as an average unintelligent male lead.

Maya Ali as Sonya is flawless as a woman who can hold her own and speak her mind. To show an independent woman in a story like this is refreshing. There is no unnecessary crying, no batting of the eyes, no heaving chests and yet we can feel the grief Sonya experiences when she loses her brother or sees the man Rumi has become.

Talha Chahour is a gift from God, the industry should explore his potential as an actor to the fullest and not let his prowess go to waste. Nadiya Jameel as Sonya’s mother and a Lahori socialite who married and settled in East Pakistan is a sight for sore eyes. The country may be falling apart but not before she finds a suitable beau for her daughter. Her range as an actor really comes through when she faces inexplicable grief.

To illustrate the human cost of political failure in a palatable manner is a feat not many writers and directors would have dared to take on, and yet Moeen and Hussain did and the result is marvelous. The narrative, its presentation on screen, actors’ performances, the production quality of the show, all goes to show that Pakistan is capable of producing dramas that are miles ahead of the usual saas-bahu saga our viewers are forced to watch.

With excellent production quality, exceedingly beautiful camera work and overall treatment of the show followed by beautiful execution, Jo Bichar Gaye has sent a message to all other productions to showcase their best. Dark, intense and an utter treat to watch, Jo Bichar Gaye will leave a lasting mark on the fabric of Pakistan’s drama industry and we could not be more delighted!