Love, lies and deceit: The intricate storytelling of Kamli 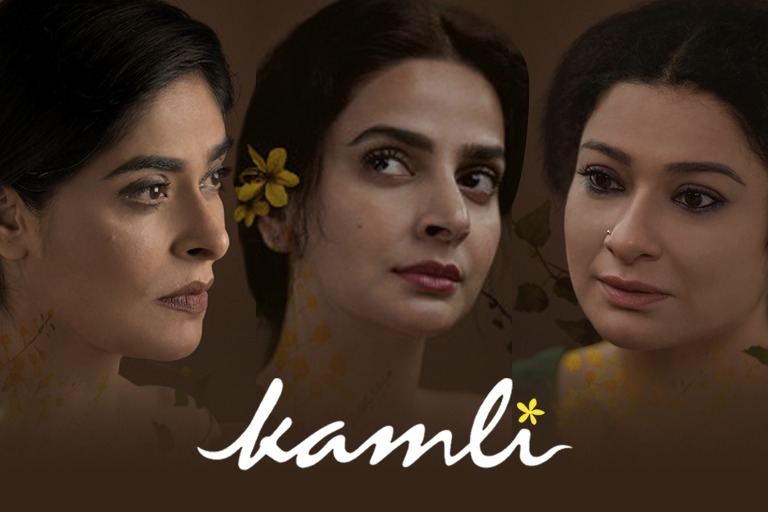 KARACHI: With an exceptional cast which includes the likes of Saba Qamar, Sania Saeed and Nimra Bucha and ace director Sarmad Khoosat behind the camera, there were high expectations from Kamli. The two minute long trailer showed disjointed scenes set against ominous music which left the plot up to our imagination. While we tried to piece together a potential plot for Kamli, it turns out the actual story for the movie was beyond what we could have come up with. The masterpiece is an intricate web of stories that run parallel and are laden with symbolism. Just when you think you have understood what the movie is about, the plot twists and everything begins to fall into place before falling apart again, leaving you absolutely shocked. For those who have not watched the movie yet, fair warning: If you want to figure out the story for Kamli, you need to focus on the small details in the movie.

On a very surface level, Kamli tells the story of a young and beautiful Hina (Saba Qamar) who spends her days waiting for her husband Saqlain to return. The wait has amounted to eight years and Hina has lost the light in her eyes. Subdued and quiet, she spends her days in a monotonous routine with her sister-in-law, Sakina (Sania Saeed). Sakina loves Hina but her love is overbearing and suffocating. She, too, sits in hopes that her brother will return and fights anyone who suggests that it is time to let Hina get remarried. Hina spends her afternoons modeling for Zeenat (Nimra Bucha). An alcoholic who is in a loveless marriage with Malik Sahab (Omair Rana). The couple is often pitied because they do not have children.

One day, Hina meets Amaltas (Hamza Khawaja), a traveler with just a camera and a motorcycle to his name. Their chemistry is insane and no matter how hard Hina tries to fight it, she is drawn to him. Things finally begin to look up for Hina until Zeenat intervenes with a plan of her own. And that is when things begin to spiral out of control. Secrets are revealed, fires rage on and the lines between reality and imagination become blurry.

But there is more to the movie than just mystery. As the romantic thriller goes on, everything we thought we knew is turned upside down. Kamli makes sure to evoke all of its viewers’ senses and tap into each element present in the surroundings. Set against the beautiful scenery of the Soon Valley in Chitral, we are treated to shots of clear blue water, scenic waterfalls, tall weeds and hidden alcoves. The nature adds to the thrill, danger and romance that is budding between the two lovers. But everything runs in a parallel in the movie. Where it all begins with water, it comes to an end with fire. And the audience only realizes this right at the end, shaking you to your core as realization dawns.

The symbolism in the movie is also an integral part of the story for Kamli. In one of the opening shots, just before her meeting with Amaltas, Hina catches a glimpse of a lion preying on a deer on TV. The audience worries if the strange nomad is preying on the innocent devoted wife as he tells her that there is no pretense between the two animals. The lion is very clear of want it wants. However, as the two dance to the tune of ‘Mukhra’ by Atif Aslam, we see Hina transform into a lioness while Amaltas helps her realize what it is that she truly wants. And that is nothing more than to love someone who isn’t a ghost.

In another instance, Sakina tells Hina the story of a star who falls in love with a traveler. But their love story is interrupted by the clouds who seem to be the antagonist of the story. The story, we learn later on, is symbolic of Hina and her life. But who are the clouds in this situation and what are they protecting her from? Hindsight is twenty twenty and the truth of who the actual villain in Hina’s life is one of the most unexpected scenes in the movie.

Saba Qamar is brilliant in the way she portrays Hina on screen. We can see the longing in her eyes, the subdued nature and the eagerness to escape. Even though she hardly says much in the movie, her expressions give it all away. And once the weight is lifted off of Hina’s shoulders, the audience can practically feel the same as they watch Hina transform into the happy woman she ought to be. Watching her on screen, Saba Qamar will make you a confidant. You will feel things for her and with her that no one else in the movie can. She will make you listen to her story without words, sway in the forest without music and hold on to the light at the end of the tunnel. As Hina, Qamar will make you fall in love with the man of her dreams, but more so herself.

Sakina is another testament to how well-written the characters in Kamli are and Sania Saeed does a brilliant job at bringing her character to life. If there ever was a word invented for a love that is helpless yet controlling to the extent of suffocation, Sakina’s behaviour towards Hina would be it. To what extent will one go to keep their loved ones close? To what extent will one go to save themselves from loneliness? Is the burden of suffering lessened when shared by two people? Sakina will make you question all these things while showing you sides of herself that you would never expect.

Nimra Bucha is not one to be left behind. From the get go, we feel there is something off about Zeenat. Her expressions are enough to portray what her intentions are and audiences can tell there is something eery about the woman. Bucha makes the hair on the back of our neck stand every time she comes on screen.

There is so much more to unravel about both, the movie and the story of Kamli but it would be an injustice to read about it rather than watch the magic unfold on screen. The movie has proven that Pakistani cinema is capable of so much more than the lackluster comedies that we are often presented with and no one could have made the point better than Sarmad Khoosat and his incredible cast and crew.