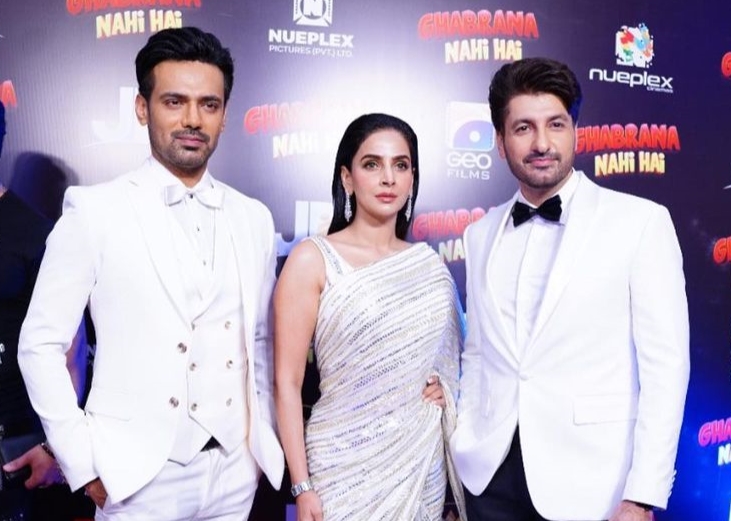 KARACHI: The last few days of April were a blur for the entertainment industry. With four films releasing on Eid and Ramzan coming to a close, promotions were in full swing for Ghabrana Nahi Hai, Chakkar, Parde Mein Rehne Do, and Dum Mastam. Media junkets, meet and greet sessions with the public, interviews and premieres were all squeezed into a week or so. The first film to take the lead with its Karachi premiere was Saqib Khan’s Ghabrana Nahi Hai. On April 29, at an event attended by the cast, crew, journalists and celebrities alike, we were invited to an exclusive screening of the full movie, and here is what we think of Ghabrana Nahi Hai.

Going into the cinema, I had my expectations low. Way too many times have audiences been lured by a star-studded cast and scenic views into watching Pakistani movies. But to be honest, stepping inside a movie theatre to watch a local film after what seemed like eons (spare Nabeel Qureshi’s Khel Khel Mein) had an excitement of its own. Ghabrana Nahi Hai also marked Syed Jibran and Zahid Ahmed’s debut on the big screen. And Saba Qamar is a force to be reckoned with regardless of the scope of the screen.

We might have had our reservations when the trailer of the film first came out. Zubaidi (Saba Qamar) is getting married but we are not sure to whom, there is a property dispute which apparently turns into a love story. But when you watch the film, most of these confusions go away. The film opens with Zubaida ready to walk down the isle dressed in a beautiful red lehenga. However, confusion unfolds when there are two baraats waiting for her at the doorstep, one lead by Sikandar (Zahid Ahmed) and the other by Bhai Mian (Nayyer Ijaz). The sign at the venue clearly reads ‘Zubaida weds Sikandar’ so then what is the other groom doing at the venue? And why is Vicky (Syed Jibran) sulking over the whole matter while sitting next to his own sherwani? To find out who Zubaida’s groom really is, we are taken into flashback.

The basic gist of the story is known to pretty much everyone. Zubaida is the only child of a father who does not consider her second to a son but is also aware of the restrictions that come while being the father of a girl. When his property is illegally occupied, Zubaida offers to go to Karachi from Faisalabad with her father to seek justice but the latter stops her in fear of what going to court might do to his ‘izzat’ aka his daughter. Hence, Zubaida lies to her parents about going to Karachi in search of acting opportunities and instead, lives with her cousin Vicky until she gets justice for her father.

Vicky is perhaps the most humorous and also the most caring character in the film. Madly in love with Zubaida, he respects her boundaries, confesses his love but never forces it upon her and goes out of his way to help her. Syed Jibran looks convincing as a doe-eyed lover and nails his comic timing as well. The plot thickens as Zubaida crosses paths with SHO Sikandar (Zahid Ahmed) and the two fall in love. Vicky’s pain as he gets thrown out of the love triangle is laughed off by both, audiences and the writer.

Ghabrana Nahi Hai might be Zahid Ahmed’s first try at a movie but the way he managed to translate his small-screen charm onto the big screen is commendable. Ahmed switches between a corrupt police officer, a romantic trying to win over the girl of his dreams and a heartbroken man, and looks convincing in all three forms. Ahmed’s dialogue delivery and deep voice also convince audiences that he was made for the big screen. We just wish the film had introduced him in a better way rather than picturize his entry around a highly uncomfortable and unnecessary item number.

The thing about Saba Qamar is, every time she is a part of a project, your eyes cannot help but search for her in every scene. The same happened in Ghabrana Nahi Hai as well. Audiences were captivated every time she appeared and waited for her to come in every time the scene changed. There is something about Qamar’s aura that demands attention, because the actor really does leave no room for distractions. Our only concern is whether Qamar, too, is on her way to being typecast as an actor who always plays the strong female lead. Not that it is a bad thing, but how many stories can our writers tell about a woman fighting patriarchy and wishing she was a man in our society before they all start to sound the same? Perhaps Kamli will surprise audiences in the best way and Qamar will prove all of our doubts wrong.

Safe to say, Zubaida’s character is easy to love. Women can relate to her every time she is reminded about the restrictions associated with her gender. We can feel her pain every time society makes her feel like she is helpless regardless of how steadfast she might be. Zubaida and Sikandar’s chemistry also makes one smile, without making the whole scenario cringeworthy and deviating from the main plot. Saba Qamar and Zahid Ahmed nail the romance, making it hard to look at a third character when they are in the frame.

Ghabrana Nahi Hai might not be flawless but it surely is entertaining. After years, I found myself truly laughing over the jokes in a Pakistani film and that is saying something. The film is relatable, has multiple layers, strong performances by the whole team and provides an escape from the otherwise mundane storylines and abuse our audiences have to witness every day. Not bad for a start, is it?