At the Dum Mastam trailer launch 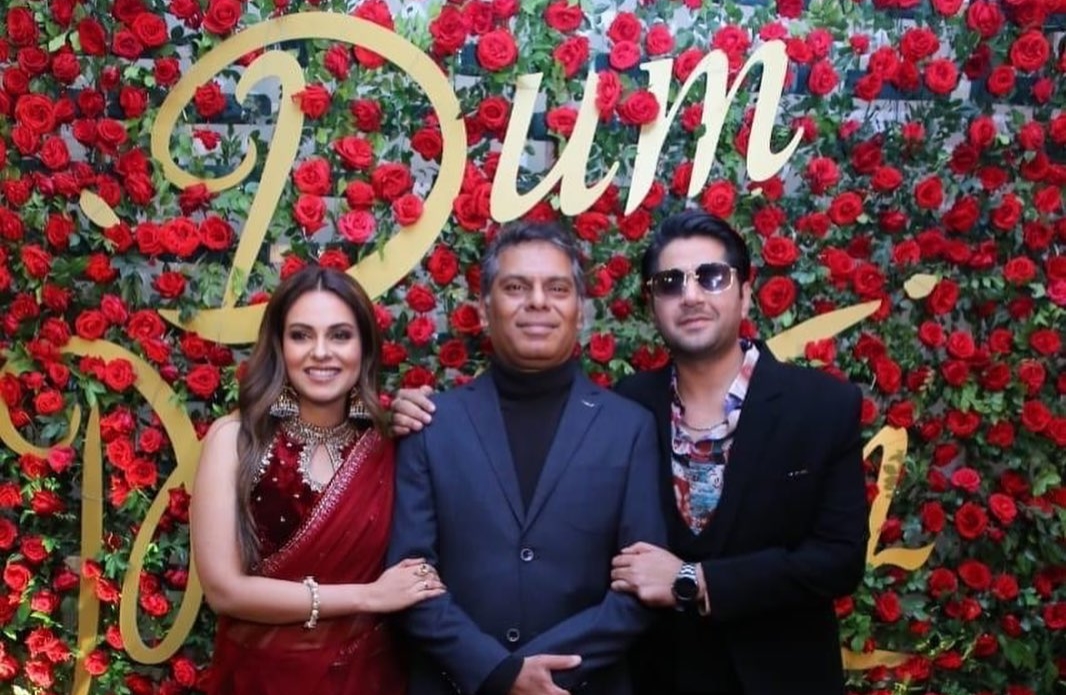 KARACHI: The Pakistani film industry, like many others, was greatly effected by COVID-19. While cinemas remained shut for over a year, filmmakers struggled to showcase their films to audiences. However, 2022 seems like a big year for movies. Only this Eid, five Lollywood movies are set to hit cinemas. Dum Mastam is one of these projects and took the lead in launching its trailer in a star-studded event in Karachi on February 24.

In true Karachi style, the event began nearly two hours later than it was supposed to. A lone Adnan Siddiqui could be seen entertaining the red carpet until more cast members arrived. Stars for the evening and lead actors of the Dum Mastam, Imran Ashraf and Amar Khan, kept guests waiting and were the last ones to arrive. Sanam Jung served as the host for the evening, charming the audience with her effortless on-stage presence.

Producers Akhtar Hasnain and Adnan Siddiqui were welcomed on stage followed by Ehteshamuddin, the director of the film. Imran Ashraf and Amar Khan were welcomed as actors from the small screen who are now ready to impress audiences with their film debut. Ashraf shared how he was scared from the moment he was offered the script, considering that it was a film. Khan stunned in a red saree as she began speaking about her experience not just as an actor but also as the writer of the film.

Khan beautifully commented that cinema is an experience about human emotions, which will never go out of style or ‘trend’. Even if more than 20 Lollywood films could not release because of the pandemic, 2022 could be the start where filmmakers get another shot. Khan also shared that it took her 2.5 years to complete the screenplay of Dum Mastam and for Ehteshamuddin to have taken the leap of faith with her writing is nothing but an honour for her.

Dum Mastam not only marks its lead actors’ movie debut but also introduces other artists as actors. Rahat Fateh Ali Khan, for instance, is ready to make his acting debut with his cameo in the film. Co-producer Adnan Siddiqui also has a special appearance in the film. Amongst other cast members are Wajahat Rauf, Arsalan Naseer and Taimoor Salahuddin.

Bao seems to be interested in Alia who would much rather date the likes of Fawad Khan. Alia also comes from a conservative family who does not approve of her dancing career. While Alia dreams of soaring on stage, her family has reservations about the kind of exposure she would be receiving. Amar Khan looks promising in her role of a dancer who fights for her dreams. The movie also has 11 songs, making one wonder how they would be incorporated in a 2 hour film without losing the storyline as well.

Imran Ashraf who plays the role of a struggling singer also shared that audiences will get to hear him sing in the film as well. Ashraf has time and again impressed audiences with his acting. Whether he can do the same with his singing will be an interesting aspect to look out for.

With four other films coming out this Eid, will Dum Mastam manage to stand out? The film has music, dance, beautiful cinematic shots of Pakistan and a talented cast. But does it have the pulling factor that will make audiences want to watch it on the big screen? Only time will tell.