Pakistani movies to look forward to in 2022

With cinemas finally reopening, here are a few Pakistani movies we're looking forward to watching on the big screen. 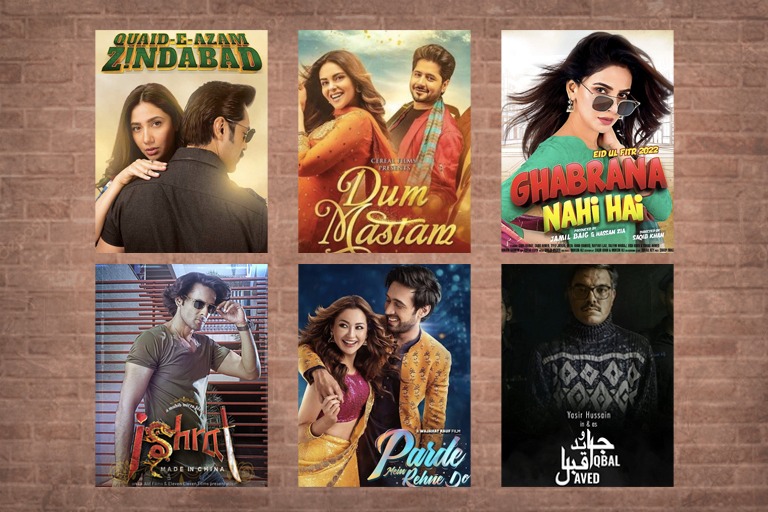 KARACHI: It’s been tough two years for many businesses including the Pakistani film industry. Just as we got our footing well into the cinematic world, the pandemic raged on and stalled the progress. Many movies, that had been announced, were shelved as the cast and crew waited for cinemas to open to screen them. It seems as though that time has finally come. The comeback of Pakistani cinema post pandemic started off with a bang with Nabeel Qureshi’s Khel Khel Mein and now we’re keeping an eye out for these upcoming Pakistani movies.

1. Ishrat Made in China

Ishrat Made in China is a prime example of an upcoming Pakistani movie that was delayed by the pandemic. While the project was announced over two years ago, they only just released the trailer. The movie marks Mohib Mirza’s directorial debut and will see him star opposite Sanam Saeed in the lead role. While the trailer doesn’t give away too much about the movie, what is clear is that the movie is a fast paced, dramatic, action movie that has its fair share of romance as well. Ali Kazmi, HSY and Sara Loren are also a part of the movie. Although Ishrat Made in China doesn’t have a release date just yet, we are definitely looking forward to seeing what the movie has to offer.

Another Pakistani movie that was set to release in 2021, this Saba Qamar starter has now been pushed back to Eid-ul-Fitr 2022. Produced by Jameel Baig and Hassan Zia, the film marks Zahid Ahmed and Syed Jibran’s acting debut on the big screen. As per the director, the movie is based on female empowerment and follows the life of a daughter whose father has been wronged. Qamar will play the female lead, Zubeida, an only child who fights for justice for her father. Ghabrana Nahi Hai promises elements of action, drama and romance and we are looking forward to the movie.

3. Javed Iqbal: An untold story of a serial killer

This is one upcoming Pakistani movie we are very excited for mainly because it’s outside the usual genres that we’re used to. Yasir Hussain will play the real life serial killer Javed Iqbal who murdered over a 100 children. Ayesha Omer will star in the movie as the police officer leading the hunt against the killer. The trailer alone gives us the creeps and makes us want to hold our children tight. Although the movie was set to release earlier this month, it has now been pushed back to January 2022.

With the trailer released back in October 2020, Fahad Mustafa and Mahira Khan fans have been waiting anxiously for this movie. Very little has been revealed about what the movie is actually about other than the fact that the movie has a whole lot of action and Mustafa is playing a police officer. But what we do know, finally, is when the movie is being released. Taking to social media recently, filmmaker Nabeel Qureshi announced that it is hitting cinemas on Eid-ul-Azha 2022.

Dum Mastam, which was set to release earlier is a first for many. It is supposed to mark Imran Ashraf and Amar Khan’s movie debut and Adnan Siddiqui’s debut as a producer. But just like the rest of the movies, it suffered from delays due to the pandemic. The movie, which is meant to be a romantic comedy, has finally gotten a tentative release date for Eid ul Fitr 2022.

Admittedly, we’re looking forward to this Hania Aamir/ Ali Rehman starrer for all the wrong reasons. The teaser trailer failed to impress and instead, with its awkward dances movies, obscene jokes about sex tapes and overall lack of direction. But we’re curious to see whether the movie will live up to the cringefest that was the trailer or will it surprise us. We’ll have to wait and see!