Films to look forward to this Eid 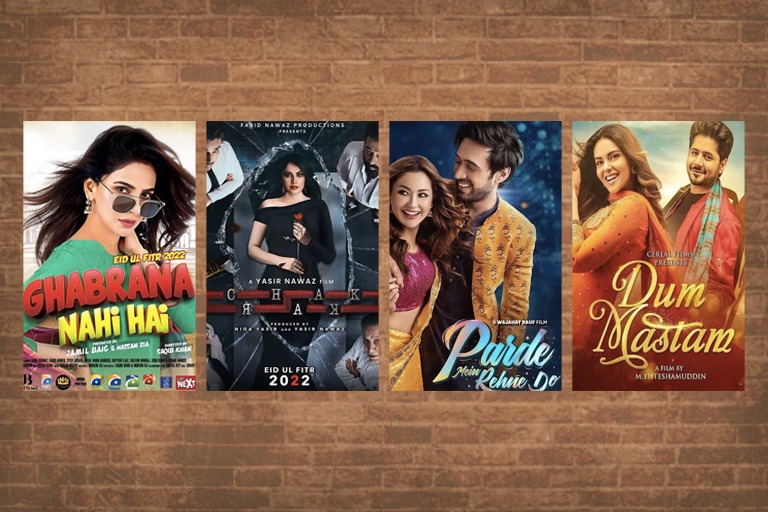 KARACHI: If you aren’t the kind of person who enjoys all the fanfare associated with Eid and want something to do beyond just going to visit your relatives and sleep, we have a solution for you. After a long hiatus because of the pandemic, Pakistani movies are finally making a come back. So much so, there are at least four of them releasing this Eid. Here is a list of the Pakistani movies releasing on Eid-ul-Fitr that you can watch!

Like many movies, Dum Mastam had to face a series of setbacks when it came to the release date. The pandemic hit and the movie that was supposed to release back in 2020 was delayed by nearly two years.

Finally releasing this Eid, Dum Mastam is your run-of-the-mill romantic drama/comedy. Produced by Adnan Siddiqui, the movie sees Imran Ashraf and Amar Khan in lead roles as Baao and Aliya. Baao is your everyday hopeless romantic while Aliya is his strongminded counterpart. Baao sings, Aliya dances. They have chemistry, they exchange a lot of banter, they even have a couple of songs thrown in the mix. Yet, the stars do not align and they do not end up together.

That is just one half of the plot. As the trailer goes on, we see Baao and Aliya face setbacks in their life, beyond just romantic setbacks. Aliya gets recognized for her dancing skills but her conservative family will never allow her to pursue her passion. Baao’s songs finally hit off but not in the way he wanted. And in the midst of their respective crises, the two find themselves back in each other’s company.

If you are looking for a light Pakistani movie to watch this Eid, Dum Mastam is the one for you!

What do you get when you add murder and mystery to the whole Fizza/Shiza fiasco? The answer is the movie Chakkar. Starring Ahsan Khan, Neelum Muneer and Yasir Nawaz, the movie seems as intriguing as it does absurd.

Muneer plays a double role in the new movie. On one hand, she plays Zara, an actor who is surrounded by scandal. She is known to be risqué and her family has chosen to disassociate themselves from her. The only person who is on her side is her twin sister Mehreen, who does so despite her husband’s demand that she, too, cut her sister off. What could possibly go wrong?

Well that’s just the thing, everything goes wrong. For reasons that have not been mentioned in the trailer, the sisters decide to pull a Parent Trap and exchange places for a week. They are so confident that they believe Mehreen’s husband Kabir (Ahsan Khan) will not be able to tell the difference. Only, in that one week, one of the sisters, presumably Mehreen (who was posing as Zara) is murdered. The murder opens a Pandora’s box of secret and scandal and everyone is a suspect, including Kabir. Will Yasir Nawaz, who plays the detective, be able to figure out who committed the crime?

This is one of the more different kinds of Pakistani movies being released on Eid. It offers more than just comedy and questionable item numbers, but also includes the mystery of the whodunnit. We really have to watch the movie to see if the cast and crew of Chakkar will be able to pull off such a genre.

2022 is Saba Qamar's year! From her web series to her long list of movies and dramas, we cannot be more grateful to her for gracing our screens. Which is also why we are so excited for Ghabrana Nahi Hai, despite the fact that the trailer was all sorts of confusing.

The premise for the movie begins with Qamar narrating how her father’s retirement marked two very important occasions, his daughter’s wedding and him buying his own house. But a property dispute leads the social media influencer straight into the lion’s den and into the morally corrupt officer’s (Zahid Ahmed) life.

A love triangle that involves Zahid Ahmed and Syed Gibran, a villain (Nayyar Ijaz) who is in control of the police and a plot twist that leaves us incredibly confused. With so many questions, the only way we can get answers is if we choose Ghabrana Nahi Hai as one of the Pakistani movies we plan to watch this Eid.

It is hard to miss all the PR surrounding this Pakistani movie. From dancing on a bus to crashing a wedding, the cast and crew of Parde Mein Rehne Do have taken up a big task in making sure their movie lives up to the hype they are creating.

When the teaser for the movie came out, we felt all sorts of uncomfortable. From jokes and sex tapes to questionable dance moves, we were taken aback by the Haania Aamir and Ali Rehman Khan starrer. However, to be fair, the actual trailer seems to offer a bit more clarity about what the movie is about.

Produced by Wajahat Rauf and Shazia Wajahat, the movie centers around a couple who simply cannot conceive. Just like most young couples, they have to face the pressures of society who keep questioning them on why they aren’t having a child. From desi totkas to unsolicited advice to a possible second marriage, the pressure ends up getting to the couple who seemingly part ways. What will happen to the otherwise happy couple? Who is to blame, if anyone, for the lack of spawns in their life? Will the story end in tragedy? Probably not.

So, which one of these Pakistani movies are you planning to watch this Eid?