How to make a Ramadan ‘special’ 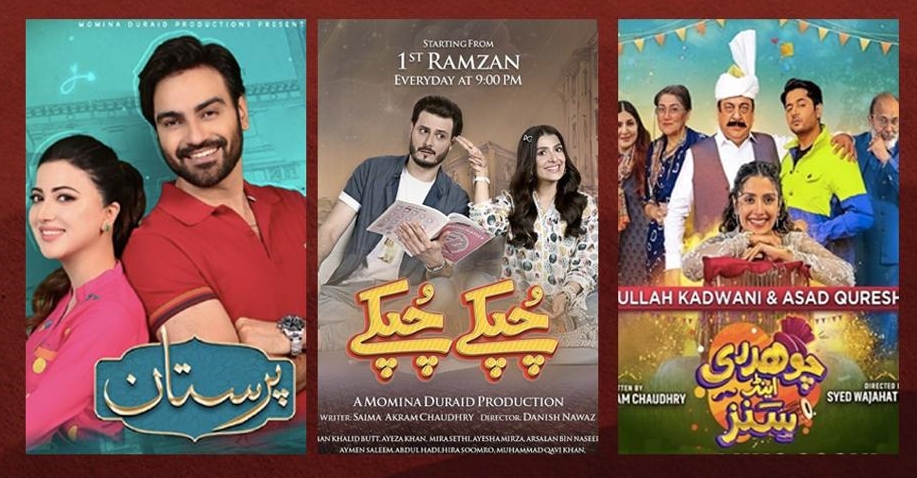 KARACHI: As Ramadan approached, Pakistani audiences were promised a bunch of dramas to watch during the month. However, a closer look makes one wonder what is so ‘special’ about these Ramadan specials anyway? With most of them following a standard recipe for (poor) characterization, how can one expect these shows to stand out? Take two out of three Ramadan specials from this year, for example. As episode 4 went on air, the similarities between Paristan and Chaudhry and Sons became strikingly visible. Not to forget the constant deja vu from last year’s Chupke Chupke. Confused? Let us run you through Pakistani dramas’ guide towards making a Ramadan ‘special’.

Imagine a girl named Pari. Who is an idealist. And an orphan. Also refers to herself in third person. Now imagine two of these girls. Even if you have a hard time imagining the scenario, just tune in to Paristan and Chaudhry and Sons to watch it come to life. Aymen Saleem and Ayeza Khan play the female leads in the two dramas respectively. But both of their characters are named Pari. Both of them are also happy-go-lucky individuals whose idealism often gets on other people’s nerves. Not to forget Ayeza Khan’s character from last year’s Chupke Chupke. Is the actor on her way to being typecast for chaotic, college-going girl who only dreams of superficial things?

Introducing a character whose only purpose is to keep track of finances and complain about budget seems to be the new in thing for Ramadan specials. Doesn’t Juveria Saud’s character from Paristan remind you a lot of Farhan Ally Agha’s character from Chupke Chupke? They both live in big houses where women are always dressed to the nines yet, they cannot stop calculating expenses every second of every day. Not to forget the forced (and broken) Punjabi that Saud’s character speaks, another downfall of many local dramas recently.

Okay fine, Imran Ashraf isn’t 40. But he also isn’t 20. As if it wasn’t bad enough that most young characters in our dramas are shown to be students (does no one ever graduate?), we also have the problem of inappropriate casting for such roles. For instance, Imran Ashraf’s character from Chaudhry and Sons, Billu, is a student. But does Ashraf look the part? Barely. To be fair, even Ayeza Khan no longer looks entirely convincing as a college student.

Truth be told, we don’t entirely hate the Tiktoker dada (Mohammad Ahmed) from Hum Tum. He was introduced to the world of social media as a way of keeping himself occupied after his wife passed away. While his following may have been exaggerated a bit, his social media activity seems to be harmless. As opposed to Asma Abbasi’s character from Chupke Chupke. This grandmother is overly obsessed with updating her status every hour and actively uses social media to spread gossip and compete with other relatives. Honestly, these characters are prime examples of why people over 50 should not be allowed on social media.

Characters from the working class to add humour

Of course, when all else fails, our dramas rely on comic relief. And when the main characters fail to provide that, we are introduced to their househelp that keeps the humour (and the broken Punjabi) going. More often than not, these characters are only introduced to prolong the play a little more than necessary.

There is really no way out of this one, is there? Pakistani audiences have been screaming against the concept of cousin marriages for months (if not years) yet, our drama creators are adamant on feeding us the same narratives. From Gaiti and Shams in Laapata, to Faaz and Meenu in Chupke Chupke, Bela and Basim in Ishq Jalebi and now Ujala and Babar in Paristan, regular dramas and Ramadan specials, all seem to be going down the same path. To make things worse, Pari and Billu from Chaudhry and Sons are also probably going to turn out to be distant cousins.

So much for ‘special’ content that will keep you entertained through the month!