Paristan is your typical Ramadan serial 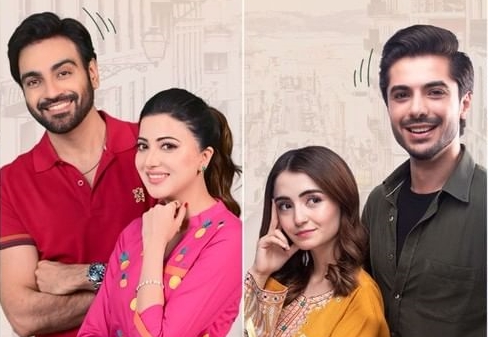 KARACHI: Aymen Saleem and Arslan Naseer earned themselves quite a fan following after the two shared the screen for Chupke Chupke last Ramadan. Their onscreen chemistry was specially commended. Naturally, fans were more than excited when it was announced that Saleem and Naseer were pairing up for yet another Ramadan special, this time in lead roles. However, as Paristan aired episode 2 earlier today, the drama came off as yet another Ramadan serial, with nothing ‘special’ about it really.

Aymen Saleem plays Pari, a girl who lives in fairyland. An orphan, she lives with her uncle’s family who considers her to be a daughter. Juveria Saud plays Pari’s aunt, and also the typecast character found in most Ramadan specials whose only purpose in the show is to keep track of the budget. We saw Farhan Ally Agha play the same role in last year’s Chupke Chupke where the only time he came on screen was to talk about the house expenses. Saud’s character, too, is annoyingly similar. With a face full of makeup each morning and a house that is big enough to have separate rooms for each person along with a big garden, she cannot help but complain about how expensive chicken is.

Pari, too, has perfectly blow-dried hair and makeup that would not budge even in the scorching heat yet being able to afford a rickshaw ride is a major concern for the student and her aunt. For any Ramadan special that follows the standard recipe for its characterization, it is almost compulsory to include a character from the working class that adds humour (and a bit of Punjabi) to the situation. In Paristan, Mooro and Mira Sethi play domestic staff members who serve exactly this purpose.

The plot for Paristan seems fairly predictable. Pari and Arsam (Arslan Naseer) cross paths in the most unexpected of ways (or rather, the most cliched way as Pari literally falls into Arsam’s arms). The two are like polar opposites yet, their paths are going to align at some point.

Merub Ali and Junaid Jamshaid make a cute onscreen couple as Ujala and Babar. Yet, how many more cousin marriages (or affairs) can our audience really take before we don’t even want to look at our own cousins anymore?

Paristan may have set out to be a light watch but how many more run-of-the-mill shows are we going to feed our audiences in the name of brainless entertainment? Can good content only stand out when it is intellectually stimulating? When will our writers learn how to explore the rom-com genre without involving a bunch of characters that even a five-year-old can pen down?