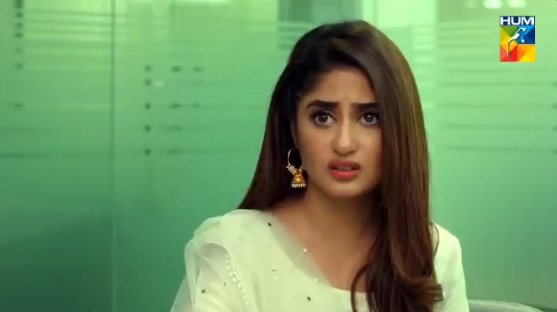 KARACHI: On Sunday, Pakistani actress Sajal Ali posted a trailer of her upcoming Hum TV drama titled Yeh Dil Mera. The actress is starring alongside her real life fiancé, Ahad Raza Mir who plays her love interest, according to the trailer.

The trailer has had us scratching our heads if we’re being honest. Sajal Ali plays a vulnerable character who is ecstatic at finding a job interview is shown to result. However, her interviewer, who appears to be the CEO, asks unrelated questions and starts flirting with her instead. This unrelated discussion comes across as a classic case of sexual harassment in the workplace where the doe-eyed young employee is shown to view this inappropriate behaviour as flattery.

Sajal Ali’s character is then shown to be smiling at her laptop proceeding this encounter with romantic music overlapping the scene. The nuance of this scene progressively instills a feeling of showing women as opportunity grabbers when it comes to settling with a rich, well-established man rather than showing women as independent beings who can be passionate about taking work seriously for a change. This narrative is insensitive to an already patriarchal society that determines a woman’s success through traditional roles of marriage and child bearing and limiting her abilities through prioritised domesticity.

The onset of the trailer sparked the audience’s interest but not in the way the drama producers had hoped perhaps. Many people have taken to social media to call out the problematic glorification of the seeming harassment in the drama. However, since this is just a trailer other users are asking people to base their judgement after watching the serial to get a better sense of what the story will progress into.

Just last week i raved about how much i love Sajal Ali. Today the Yeh Dil whetevs teaser dropped. I am convinced the universe hates me.
I RLLY CAN'T HAVE SHIT IN THIS HOUSE. pic.twitter.com/0ORVokyEOi

Sajal Ali is probably the best actress in our country but wth is this content? When will our drama writers come out of love stories and breakups etc. Trash content. https://t.co/0xad1ixMns

You can count on Sajal Ali to accept the most problematic scripts and ads.

my personal irk with Sajal Ali and Iqra Aziz types is that khud tou they have all the liberty to do whatever the f they want as elite pakistani women. but they see nothing wrong in propagating the same sexist bs on tv that most of us struggle with

Its not just Pakistani drama writers at fault but these actors like sajal ali accepting such parts. You're sending a message to impressionable young girls that it is okay for your employer to use an interview to hit on you and make advances by using the number on your cv.

Blocking Sajal Ali just so I can avoid seeing that clip on my timeline. Muting didn't help.

here we are dreaming about getting independent and our television wants us to look up to THIS
disgusted. sajal ali is cancelled, first fair and lovely hd glow now this. fuck off. https://t.co/S0zoskcS6p

This is a disgusting story line. Were you not content with weeping in every single drama serial you've ever starred in and showing girls their entitlement to misery? That youre now attacking workplaces too?

No offence but if anyone conducted an interview like that in real life it would be creepy af and qualify as sexual harassment. Our TV writers need to stop framing male creepiness as romance.

Not even subtle normalization and romanticization of something as grave as workplace harassment. But since it's Momina Duraid's saas who's doing it, no cancellation .

Wait what if this is just her imagination for an interview. No guy in real life would ask such dumb questions.

If somebody dared to ask me such questions in an interview, I'd have walked out. It is so cringy.