Recap 2021: The most shocking celebrity statements

Here's a round-up of the good, the bad, the funny, and the ugly of things celebrities have said over the course of the year that had left us wondering if we had heard it right. 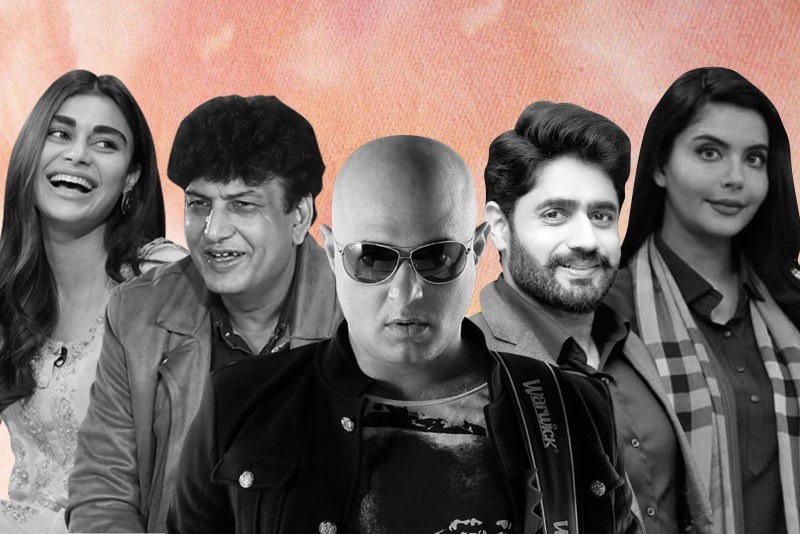 KARACHI: 2021 has been a wild year. Despite our hopes, the pandemic still raged on and everything around us was uncertain. However, in the midst of all the doom and gloom, there was one thing we knew for sure and that is we could always turn to our celebrities to keep us entertained. Over the year 2021, Pakistani celebrities have said some of the darnest things that made it to the news and made us wonder if our ears were deceiving us. Here’s a recap of some of the most shocking celebrity statements of the year 2021.

In retrospect, the entire interview and the aftermath was a train wreck. But on the plus side, it made for some quality meme content. Here’s a trip down memory lane with Sadaf Kanwal and her new found culture.

No Sadaf, my husband is not my culture

The host of the segment called Humare Mehman was way more interested in eating the lavish spread in front of her than in her actual mehman (guests) and she asked all the wrong questions in between her bites of food. But it was when she asked Sadaf about her opinion on feminism and that’s where the model made this shocking statement:

“Our culture is our husband. I married him, which means I have to pick up his shoes and iron his clothes. I know where all of Shahroz’s things are and what and when he has to eat. I need to know these things because I am his wife and I am a woman. He doesn’t have to know the same about me.”

Ironically, Sadaf Kanwal does not iron her husband’s clothes. To add to the mess, Kanwal channeled her privilege and claimed that women are not poor souls or becharis. She said, “A woman is very strong. I feel very strong and surely you [the host] must be strong as well.”  Social media was ablaze with women schooling Sadaf Kanwal on how marriage is based on mutual love and respect and that a wife’s job isn’t only to serve her husband. Needless to say, the couple didn’t really learn much from this stint and continued making shocking statements about feminism.

2. Khalil Ur Rehman giving us some serious whiplash:

Khalil Ur Rehman Qamar  is the granddaddy of anti-feminist rhetoric. Whether it’s his dramas such as Mere Pass Tum Ho with their demeaning dialogues about a woman’s worth to his on air outbursts where he’s made crude comments about women and their bodies to his unnecessary comments about women like Noor Mukadam who have fallen victim to heinous crimes, there’s no line he hasn’t crossed.

So imagine the whiplash we all got when Khalil Ur Rehman took back his words and accepted that women are not given their due respect. The shocking statements were made in context to the horrific 23rd March incident that took place in Lahore and he admitted, “Mujhe maan lena chahiye keh hamare han aurat ki hurmat, izzat, abroo mehfooz nahi hai” (I should admit that a woman’s honor and dignity isn’t safe in our part of the world).” He also acknowledged that the hundreds of men who participated in the crime were not hooligans or gangsters, they were regular men who exist in our society.

Needless to say we were shook.

Who said all shocking celebrity statements need to be in bad taste? Nida Yasir is no stranger to making shocking controversial statements. But this time, her mix up was one part shocking and two parts hilarious! A resurfaced clip from 2016 sees Nida Yasir interviewing students Abdul Aleem and Mohammad Shariq Waqar from the National University of Sciences and Technology about their electric Formula 1 racing car for a US-based competition.

The cringefest included Yasir asking how many people can fit into the car to thinking that when they referred to Formula One they meant there was some formula involved in making the car right down to wondering if a regular petrol run car is as fast as a Formula One car. The clip made for hilarious memes and even Nida Yasir’s husband poked fun at his wife for her hilarious screw up.

4. Abrar Ul Haq and Baby Shark to do do do more like don’t:

If there is one thing mothers hate, its when people try to school them on how to raise their kids. They are our kids, we literally are split open bringing them into this world and so we know how to raise our kids. Only, Abrar Ul Haq didn’t get the message and thought it was a smart idea to criticize mothers for singing ‘Baby Shark’ to their kids instead of more religiously inclined tunes.

One of the most funny vedio in my gallery….😂🤣🤣🤣#AbrarUlHaq pic.twitter.com/IkxqOw5i5Q

The statement met with a lot of criticism and for all the right reasons.

To add insult to injury, Haq decided to make a song to the tune of Baby Shark which was basically a outdated wife joke in song form. Clearly 2021 isn’t Abrar Ul Haq’s year.

What was the point of Abrar Ul Haq’s new song?

Song version of a bad “wife joke” – reinforces the most regressive, sexist ideas and is also embarrassingly unfunny https://t.co/PTS1z93QKC

To wrap up this year’s shocking celebrity statements, the last name on our list is Ali Azmat. Ali Azmat isn’t really known for his tact. He might think that he’s being blunt and that is endearing but really all he comes off is rude. Which is what happened when he decided to mock legendary singer Noor Jehan.

Being a Junoon fan, i am embarrassed… pic.twitter.com/qt36TzE7Ye

Talking about one of the most loved singers of the nation, he said, “We would turn on the TV at night, there would be a show with Tarannum,” he recalled. “Noor Jehan would be singing wearing a saree, huge earrings and over make-up. We were irritated by the Mai, we would think why is a kofta standing in front of us, is it necessary for us to watch this?”

#AliAzmat seems to have lost his mind at old age. A man who copied led zeplin and has only a handful of hits to his credit, he’s not even worth the dust of legend Noor Jehan. pic.twitter.com/fqZKJrhGmM

Naturally, people were angered by his crass statements and even more so, half of the media industry is made up of the Malika-e-Tarannum’s family who took to social media to defend her. While Azmat attempted to make amends, the damage was done.