What was the point of Abrar Ul Haq’s new song?

From criticizing mothers on their parenting techniques to making an entire song mocking women for being stalker level suspicious of their husbands, Abrar Ul Haq is on a roll when it comes to offending women. 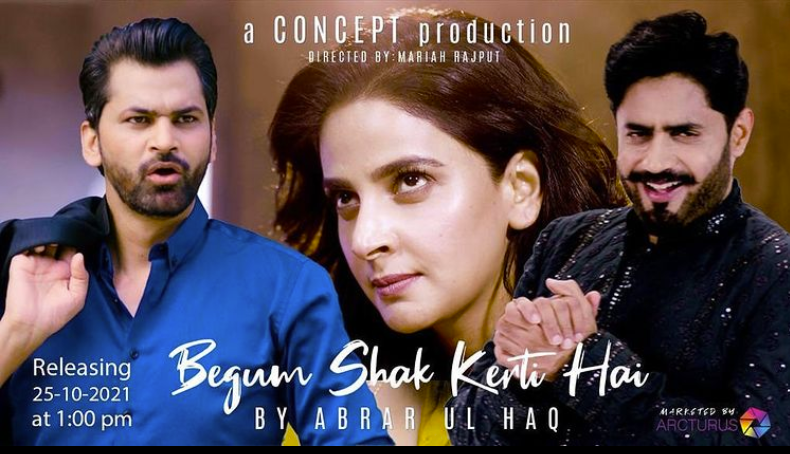 KARACHI: When I was younger I would hear old uncles tell marriage jokes at family gatherings. The jokes would usually be along the lines of how the poor husband is scared of his dominating wife. Even as a child I didn’t find humor in the jokes because of how far removed from reality they were and ironically the only people who laughed at the jokes were other old uncles at the gathering. The jokes eventually did die down but it seems like Abrar Ul Haq didn’t get the memo and instead decided to base his new song entirely on the over used age old stereotype of a crazy wife.

The song is titled ‘Begum Shak Karti Hai’ (the wife is suspicious of me) and stars Saba Qamar as the crazy wife. Abrar Ul Haq probably thought he was hilarious making the song to the beat of ‘Baby Shark’ but in all honesty, it was more like him picking at a scab that finally began to heal. For reference, the singer thought he was in a position to tell mothers off for singing ‘Baby Shark’ as a lullaby to rock their kids to sleep instead of reciting more religiously inclined verses. Naturally mothers were irked because they really didn’t need yet another person telling them how to raise their kids.

The song itself is pretty offensive to women and it’s surprising that a star like Saba Qamar would agree to convey such a concept. It perpetuates the stereotype that women are nothing short of crazy. They don’t trust their husbands, they are constantly suspicious, they invade their husband’s privacy, they over react and they are always wrong. Their husbands are the poor souls who are out to please their wives but instead get into trouble and will bear the brunt of their better half’s craziness because they love them. I get it, Abrar Ul Haq was merely trying to be funny with his new song. But for women, cheating is not something we like to joke about at all. Particularly, in a society where women are told that no matter what happens, they have to make their marriage work even if it means living with an abusive or unfaithful husband. It’s a fear women constantly live under and so poking jokes at us isn’t doing Haq any favors. And if anything, the video is proof of how men add to a woman’s suspicions. Rather than communicating with his wife, the main lead does act suspicious. Yet somehow the woman is the one to blame for her actions. Men are far from the bechara (poor soul) that Abrar Ul Haq wants us to believe that they are.

If for even a second we were to move away from the video and focus on the song itself, there’s still no positive to be found. The song is sung to the tune of ‘Baby Shark’ and using the children’s song tune made Haq’s song even more intolerable. It’s not the kind of song you’ll want to hear on repeat or even twice for that matter and other than being offensive there is nothing memorable about it. As the chorus of ‘begum shak karti do do do’ goes on, the words start to mesh together and instead of saying shak (suspicion)it starts sounding like Haq is saying begum shakar (wife sugar) do do do. Both the video of the song and the lyrics are incredibly childish. And as if using ‘Baby Shark’ wasn’t bad enough, Abrar Ul Haq decided to re-use two Pakistani wedding songs in his new song and destroyed the very essence of them. ‘Chitta Kukkar’ and ‘Desan Da Raja’ are songs that are sung at wedding, celebrating the new union and speak of love between the couple. Haq decided that he was going to use the songs in the complete opposite context. In Haq’s version of the classics, the poor husband is being victimized by his violent wife and this is an age old story.

It’s about time artists, men in particular, stop using these toxic stereotypes as a means to be funny. As for female artists, it’s about time they stop signing up for projects that demean women.