"If we take Muhtarma Benazir Bhutto's example, for me the conversation begins and ends there," she stated at the recently concluded Pakistan International Film Festival (PiFF) 2021. 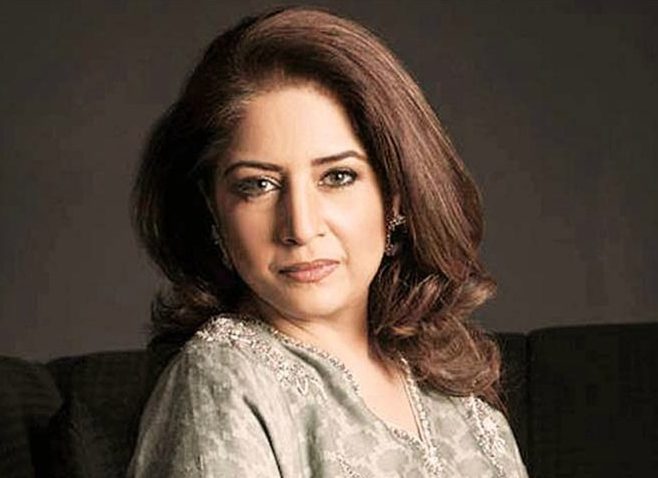 KARACHI: Karachi recently opened its arms to Pakistan International Film Festival (PiFF) 2021 that took place last weekend. On the third day, it featured a panel discussion on “Gender Stereotypes In Media and What are Women Doing About It?”. The panelists included Sangeeta, Sultana Siddiqui, Atiqa Odho, and Tasneem Ahmar. Although most panelists took to the podium to talk about the issues women face within the industry such as discrimination, harassment, lack of preference for jobs, sidelining, etc, Atiqa Odho had a different take on the rights of women.

“I know that a lot of people are angered and they say that women are not empowered, however, what my own experience tells me is different. In this industry, my male colleagues supported me very much, helped me a lot. And I do not like discrimination against men, I’m sorry.” Atiqa Odho said. “Because I believe that society has to coexist. So sitting on this panel, my experience has been very different. In Pakistan, in media, in politics, I find that if you are capable and work hard, every person helps you.”

She explained that she was born in Pakistan, where we have had a female Prime Minister taking the reigns of the country twice. “So if we take Muhtarma Benazir Bhutto’s example, for me the conversation begins and ends there,” she added. “We are talking about the entertainment industry, but we have seen the women of this country succeed in the politics of this country. And at a time when women in Muslim countries had no place for women in politics. They don’t have a place there even today.” she added.

“Even in the West, they let women move forward with a lot of difficulties. So we are born and raised in such a beautiful country, where a woman sets an example for us. In my childhood, I saw Benazir Bhutto as a woman entrepreneur. And then I saw people like Sultana Apa, Sangeeta Apa, Shamim Ara, Babra Sharif. I saw so many women in the forefront of the media on the screens. As I grew up looking up to these women I decided I can achieve anything. I do not come from a media background at all,” she continued while adding how she comes from an Industrial family.

Odho encouraged women to make a living out of working for the Pakistani media industry if they are looking for a creative career. “It is a fantastic industry to come into. This industry gives you a number of chances. It gave me the opportunity, it gave me a way to survive, it gave me a way to bring up my children. “The amount of love and respect I have received from the people of film and television, hardly anyone could be able to match that level.”

Here are a few things Atiqa Odho needs to bear in mind though: one’s own experience cannot be standardized to the enter population of women in Pakistan where an overall culture thrives on misogyny. 32 percent of primary school girls are out of school in Pakistan, according to findings by the Human Rights Watch for the year 2018. Less than 47% of women are literate.

Pakistan had no set guidelines for workplace harassment, until recently when Meesha Shafi’s case was taken up by the supreme court, and her plea finally registered as workplace harassment after being discarded for years. The court had to revise their archaic implementation of the law that existed in order for her case to be registered. Shafi’s case is high-profile, which is why it even got that much attention. Who is to say the same amount of attention will be paid to every other woman?

Women from not-so-rural backgrounds are affected by rape cultures too – much of which has been contributed to by victim-blaming and gaslighting by the media itself. So rape, harassment and discrimination are not only restricted to rural areas. The recent motorway gang rape is an example where the CCPO Lahore, instead of blaming the culprits roaming free on a motorway his station was supposed to look after, blamed the victim for being out at night and taking the route. It was only recently that the two-finger test, one of the most barbaric and primitive acts, was taken note of and abolished. Harassment and harassment jokes are often discarded as merely jokes. Jokes on second marriages and cheating husbands are also not taken seriously and even justified by prominent figures. The whole narrative around our society favors the powerful and suppresses the weak. It is that narrative that should be called out.

Discussing discrimination against men is itself highly noteworthy, and proof that platforms aimed at discussing women’s rights are often taken over by men’s issues, or by people who steer the discourse away from the ample issues women face in our society. While this does not mean men’s issues must not at all be discussed, why do we only bring up men’s rights to silence women or steer the conversation away from them? Discrimination against women has been rampant across a number of industries within Pakistan. Gender plays an important role in hiring and firing employees. And while hard work can and usually does pay off like Odho said, why are we adding extra steps on the ladder only for women when they set out to achieve something they deserve?

Odho answered her own question when she said she does not come from a media background but an industrial one. That may not have landed her within the industry by the route of nepotism, but her background is still highly powerful and privileged, as she is the granddaughter of a Sardar from Jacobabad. Not many women entering the industry have the same sort of backing.

What Atiqa Odho must realize is that as a benefactor of Girl Rising, as well as the former chairperson of United Producers Association (UPA), she holds immense power over her listeners when it comes to leading a conversation on women’s rights. In such a position, her analysis should not come from her isolated personal experience, but from an informed place with statistics of harassment within the industry, laws that are used as loopholes, the overall narratives that most of our dramas show i.e., a submissive wife who only lives to serve her in-laws and husband.

On the other hand, while Pakistan has had a female Prime Minister, who was also a strong female entrepreneur, there were a number of other factors behind her success as well. Her father was hanged to death and the country underwent almost a decade-long martial law before choosing Benazir Bhutto as their Prime Minister –  a case that does not exist in many other countries. Even today, women who join politics are prone to be harassed by fellow party members. Just this week, PTI MNA Maleeka Bokhari was attacked and injured by MNAs from PML-N in the National Assembly. Hence, concluding that we live in “a beautiful country” is nothing but gaslighting to the victims who are not as protected.

While the aforementioned stance had to be addressed and given an alternate perspective, Atiqa Odho also raised some very important pointers, such as censorship of women-centric content. Talking about Churails, Atiqa Odho said, ” I liked the women empowerment angle in it. This aired on Zee5, an international platform which means we have a new door opened for distribution. They have no problem with us, but we started asking to ban it. We made a lot of noise as the content was not airing on a Pakistani platform and does not come under Pakistani laws. It is overseas.”

She also added how Pyar Kay Sadqay was banned for addressing harassment within the family, to which Minister Shibli Faraz had also responded. Odho urged freedom of the media and channels so that people can be educated on these matters.