Both Sit In Silence For A While: An intimate theatre experience 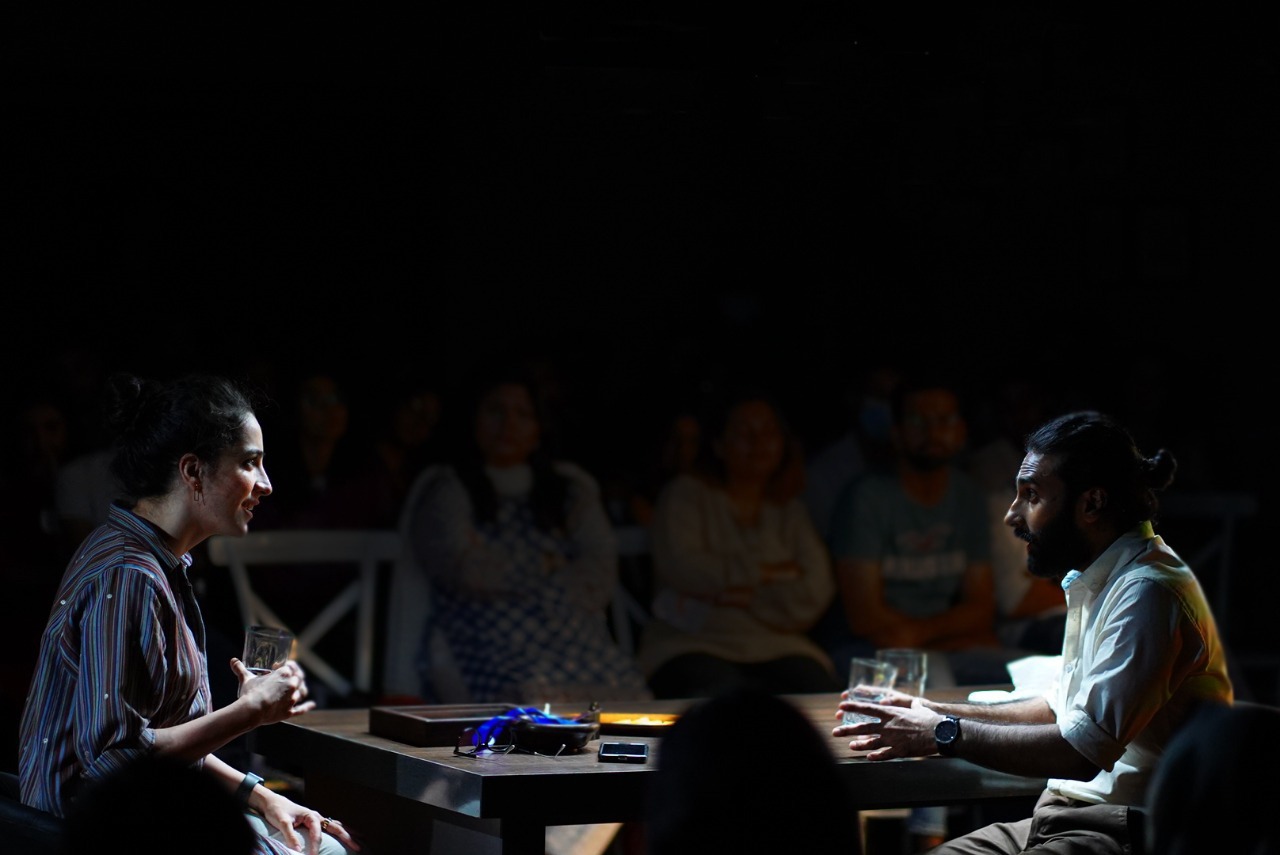 KARACHI: We knew team Joyland was not kidding when they won the Jury Award at Cannes Film Festival earlier this year. Directed by Saim Sadiq, the film has been receiving massive praises from across the world. And while Pakistani audiences will have to wait just a little bit longer to witness the magic on screen, we have had quite the chance to enjoy the team’s creativity in other projects. Co-producer of Joyland, Sarmad Khoosat, and cast member Sania Saeed released their breathtaking film Kamli not too long ago while two more cast members are currently showcasing their talent across the major cities of Pakistan. Ali Junejo and Rasti Farooq, both highly capable artists, are displaying their play Both Sit In Silence For A While in NAPA, Karachi, till August 28 before heading to Islamabad.

Written and directed by Ali Junejo who performs alongside Rasti Farooq, the play has been described as a dark comedy. And that is exactly what one expects when entering the auditorium. However, the tension between the two characters in Both Sit In Silence For A While can be felt even before the performance begins. Both characters stand very quiet and very still, not making eye contact with each other or the audience members for a good half an hour before they begin speaking. As the chairs begin to fill up, spectators also tip-toe around the room to find a spot, trying to be as quiet as the two people in the centre of the room. Three dim bulbs light up the centre of the room which has been made to look like a kitchen with a table, a microwave, a fridge, couple of blinds giving the illusion of windows and basic cutlery. Once the dialogue begins, the two very obviously tensed characters take position on opposite sides of the table. They face each other while a picture of a little girl sits on the corner of the table. 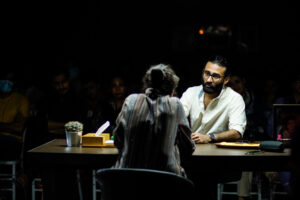 Soon enough, it becomes clear that the couple are parting ways and hence, need to figure out a place for their daughter. Both parents are incapable of keeping the child for various reasons. Being ‘busy’ is an excuse that comes up a lot between the two partners who are clearly very frustrated with each other.

As the plot progresses, tensions begin to rise as well. Yet, audiences are given the chance to laugh over petty things that most partners find infuriating about each other. In their banter, audiences see a reflection of themselves. As the two struggle to agree over something as small as to what adjective to use to describe their daughter or what a ‘functional’ family is, audiences can probably relate. 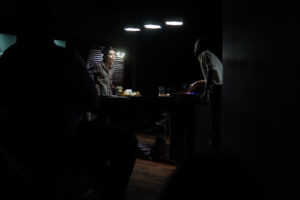 Needless to say, Ali Junejo and Rasti Farooq do a commendable job with their roles. With only two performers and barely any props, they bring back theatre in its most pure form. Where it is only the art, the artists and the spectators who are devoid of any distractions. Junejo’s script flows seamlessly while Farooq would stand out even if there were a hundred actors on stage.

The effortlessness with which Farooq delivers her dialogues, the way her tongue rushes with the speed of her character’s thoughts, and the control she has over her volume is all applaud worthy. In one particular moment, while drafting a public message on her phone, Farooq constantly reads out the message out loud in attempts to figure out the next sentence. It is in moments like these that her acting really comes across as natural for how many of us do not do the same thing while typing out a message or email? At certain instances, audiences are even tempted to give them the prompts needed to complete the message but we know we must sit tight. And that is when you know that you have got your viewers truly engaged. 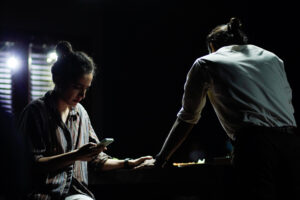 If there is one rule to theatre that anybody would know, though, it is that the characters’ should never have their backs to the audience. Which is probably the only area where Both Sit In Silence For A While fell short. From the get go, the audience is divided into two clear sections with the performance taking place in the centre. Regardless of which side you were sitting on, one of the characters had their back to you atleast 40% of the time. 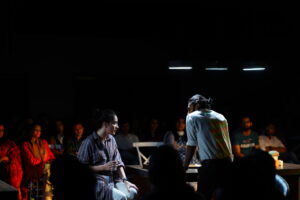 You were lucky if you were seated within the first two front rows on either side, otherwise the straight-line seating plan meant that the audiences at the back had to tilt their heads or peak through the necks of the people in front of them to get a decent view. Perhaps a typical elevated theatre style seating plan or circular placement of the seats would have been a better experience for the audience visually.

Safe to say, Both Sit In Silence For A While is not your typical drama setting. With no glitz or glamour, the play brings theatre back to its roots. An intimate experience for those who wish to understand the characters and themselves, and all that we continue to hide.

Awami Theatre Festival 2020 to commence this week at Arts Council