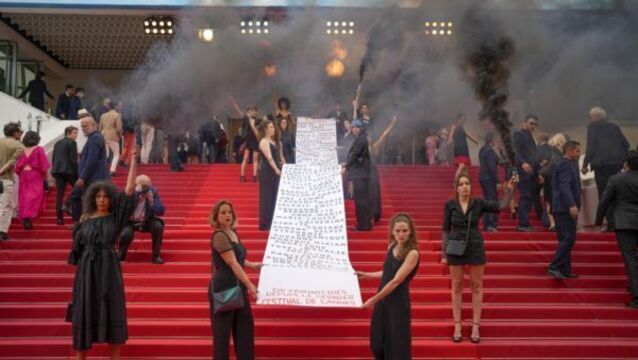 2022 really is the year of Pakistani artists. Between Arooj Aftab’s Grammy, Javed Iqbal winning at the UK Asian Film Festival and Pakistani artists being shortlisted for the Sovereign Art Prize, you would think our artists really have peaked. But there’s more! Saim Sadiq’s Joyland became the first Pakistani movie to be nominated at the Cannes Film Festival 2022.

Nominated under the Uncertain Regard category, the story follows a young man from a patriarchal family who secretly joins an exotic dance theatre as a background performer and falls for a trans actress, while his wife is expecting their first child.

Sarwat Gillani, Sarmad Khoosat and Sania Saeed are all part of the team representing Joyland at the Cannes Film Festival 2022 and the group is a sight for sore eyes!

A prestigious film festival is never complete without a little bit of drama. What seemed like an ordinary event goer attending the Cannes Film Festival 2022 ended up with a topless woman protesting sexual violence against women in Ukraine in the midst of the war with Russia.

The unnamed activist ripped her gown off to reveal her body covered in paint with the colors of the Ukrainian flag across her chest with the phrase “Stop Raping Us” written. She also had the word “SCUM” written on her back and red paint, which was made to look like blood, on her stomach and thighs.

SCUM is a French activist group who claimed ownership for the dramatic moment.

SCUM activist walks the red carpet at #Cannes2022 festival to denounce sexual violence against Ukrainian women in the war pic.twitter.com/9OfgERc49f

If you thought the topless protestor was dramatic, hold your horses because the next protest was even more so. Similar to the SCUM protest, the one which followed was for a good cause and that was for the protection of women.

The protest took place before the screening of Holy Spider, carrying a banner with the names of 129 women killed in France since the last time the festival was held. The group, who was a part of the feminist group Les Colleuses were all dressed in black and even set off smoke grenades while posing for pictures.

Holy Spider has been directed by Iranian born Ali Abbasi and tells the story of a female investigative journalist looking into the serial killing of sex workers in the Iranian holy city of Mashhad. The “Spider Killer” is behind the murders, believing he is clearing the streets of sinners. The story is based on the real life killer Saeed Hanaei, who killed at least 16 women. He became a hero to some Islamist militants, a narrative mirrored in Holy Spider.

Needless to say, Cannes Film Festival 2022 is one for the books!