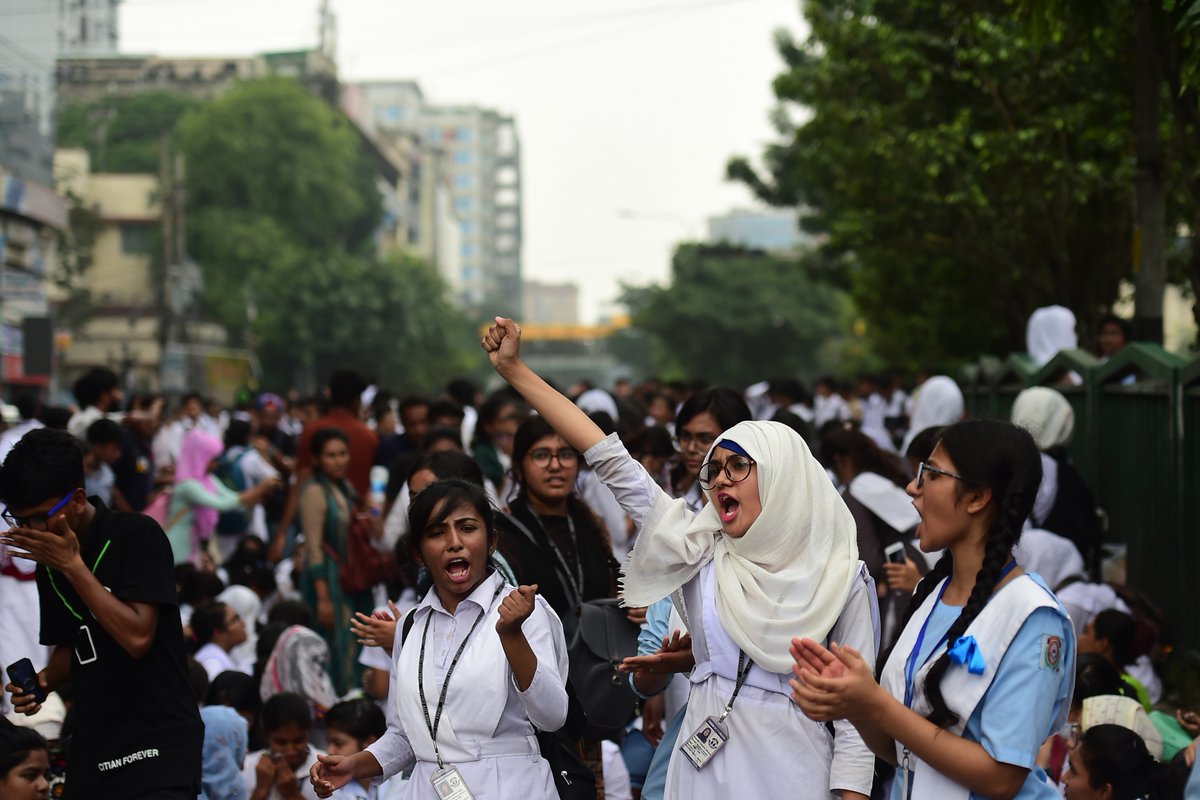 KARACHI: Hundreds of thousands of Bangladeshi students have taken to the streets of Dhaka to demand safer roads following a traffic accident last week – a protest than soon turned violent. The demonstrations, which have now been going on for a week, have paralysed parts of the capital – home to about 18 million people.

What prompted the protest?

On July 29, two schoolchildren, a boy and a girl, were run over and killed by a speeding bus in Dhaka. You would think that in a city where more than 4,000 pedestrians were killed in road accidents only last year, this too could’ve passed as an everyday occurrence. However, instead, it sparked outrage over social media and prompted a series of student protests. The protesters stopped cars, buses and trucks to check the licenses of drivers and ensure their vehicles were in roadworthy conditions.

Why did the protest turn violent?

On Saturday, the protests took a violent turn in with as police fired rubber bullets and used to tear gas on demonstrators, according to the Guardian. However, authorities have denied this.

According to BBC, a doctor and some witnesses said that the number of injured was much higher, at more than 100 actually.

Reports claimed that a car carrying US ambassador Marcia Bernicat was also attacked by “armed men” but she escaped unhurt.

Pro-government groups, such as the Bangladesh Chhatra League (BCL), a student organisation linked to the ruling Awami League Party, also took to the streets to counter the protestors – resulting in clashes.

The BCL has also been accused of attacking journalists covering the protests and destroying their phones and cameras. Further, on Sunday, activist and photographer Shahidul Alam was also taken into custody over Facebook posts and comments especially ones criticising the government’s handling of the demonstrations in a television interview with Al Jazeera.

The protests and what followed has become a major embarrassment to Bangladesh Prime Minister Sheikh Hasina’s government, which faces a general election this year.

How has social media played a role?

The Bangladesh government reportedly blocked mobile internet access for 24 hours shortly after the protests turned violent. However, social media has played a huge role in mobilising students together and helping news and updates about the protest spread.

People have also taken to social media to urge the international media to take note of what’s happening in the country.

Bangladesh is going through a substantial crisis! Teenage students of all ages are FIGHTING for JUSTICE, SAFETY and a BETTER BANGLADESH! We are trying to illustrate a BRUTAL REALITY and WE WANT OUR VOICES TO BE HEARD!#WeWantJustice #saferoadsbangladesh #bangladeshstudentprotest pic.twitter.com/S5k9ivzGdL

What is the government’s response?

The Washington Post reported that Hasina’s party is blaming their main opposition led by former prime minister Khaleda Zia for stirring up anger and using it to their advantage.

In the meantime, the government has done the following as of yet:

The CNN reported Hasina met with families of the students who were killed in the accident.

The government has promised to consider road safety reforms.

On Monday, the cabinet approved the Road Transport Act to address the students’ concerns, according to the BBC.

Why should we care?

As per a factsheet provided by World Health Organisation, more than 1.25 million people die as a result of road traffic crashes. Without sustained action, road accidents are predicted to become the seventh leading cause of death by 2030.

Are protests the answer? Bangladeshi students seem to think it’s the only way to get their government to make the issue a priority.