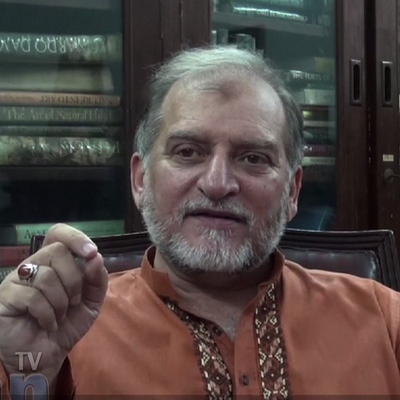 KARACHI: The Pakistan Tehreek-i-Insaf came under fire yesterday (May 31) for welcoming convicted criminal Farooq Bandial in the party. Within a few hours, Bandial was expelled from PTI following backlash over the decision.

On Friday, social media lost it over yet another move by Imran Khan’s party: announcing Orya Maqbool Jan as one of their nominees for caretaker CM.

However, confusion over the nomination persists.

Well, according to reports, earlier in the day PTI leader Mian Mahmoodur Rasheed named Jan as a nominee. A few hours later, his candidacy was by PTI spokesperson Fawad Chaudhary

Who else has been named as a candidate?

Who is Orya Maqbool Jan?

He is an analyst, columnist, Central Superior Services (CSS) officer and notorious for his controversial and extreme views

How did people respond?

Orya Maqbool Jan has been named by some PTI leader as the caretaker CM?

If what Mahmood ur Rasheed said is true and @PTIofficial has nominated that disgusting fascist @OryaMaqboolJan as one of the candidates for caretaker CM then shame on those “liberals” and “moderates” that still support this party which has shown its colours again and again.

Orya Maqbool Jan is a known bigot and I hope Pakistanis RUE the day this man has any more power than he already has in society. https://t.co/1rsl0ATer3

On several occasions, Jan has come forward with some of the most absurd and politically incorrect statements, mostly targeting women, which somehow make it to national television. Here we’ll focus on the mysoginy.

1. His issue with a progressive television advertisement that showed a girl leaving home to pursue a career in cricket

Basically, he had an issue with the girl in the ad being filmed while she’s playing. He goes on and on about the ‘camera angles’ used in the ad and how the ad disrupted the deep-rooted ‘family values’ of Pakistan. And all this because of a one second clip of her running. Oh and if that wasn’t cringe-worthy enough for you, he also says that there are no success stories of women who leave home to pursue their dreams. There are only success stories of men who do so. Women either get ‘sold’ or they commit suicide. His words, not ours.

Can’t believe somebody would say such a thing in the 21st century? Watch the video below.

Jan had a lot to say following Sharmeen Obaid’s claims that a doctor had harassed her sister. According to him, women who make sexual harassment claims only do it for media attention. And he also justified the harassment by pointing out the nature of their clothes. He said if a girl’s clothes are a little above her ankles then she allows it to happen.

3. His analysis of the ‘me too’ movement

Apparently, for him, the ‘me too’ movement and the fact that Meesha Shafi spoke against her sexual harasser is none of his business. It none of anyone’s business. These matters should remain ‘private’ because his daughter or sister shouldn’t hear them.