Dramas that have us hooked 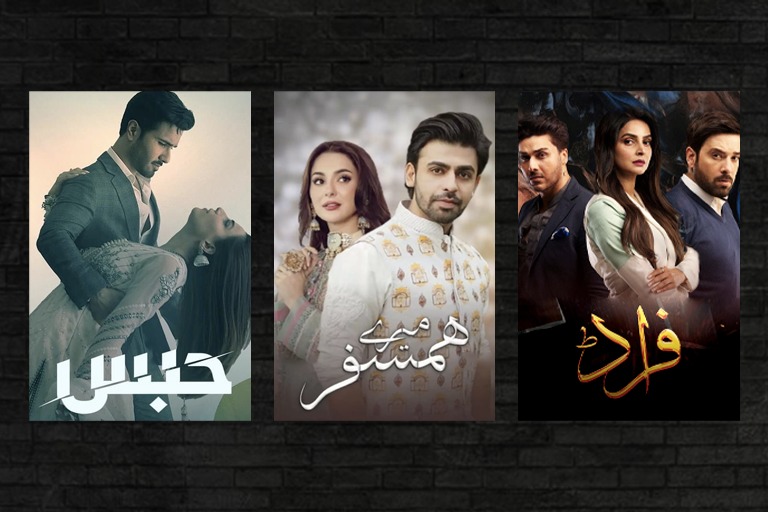 KARACHI: Dramas continue to be a constant source of entertainment for the masses in Pakistan. No matter how much content OTT platforms release, turning on the TV and watching a classic Urdu drama with your family will always have a charm of its own. While some dramas may have audiences questioning our writers’ thought processes, a few others manage to stand out. Here is a list of dramas that currently have us hooked. Be it Mere Humsafar which is on episode 27, or the recently started Habs and Fraud, these dramas continue to make it to our watchlist.

Starring Feroze Khan and Ushna Shah in lead roles, Habs started off strong from the very first episode. Love and relationships, their complexities, all were explored by the drama. Khan plays Basit, a rich and successful businessman. On surface level, he has everything. Except that his mother (Irsa Ghazal) left him and his father (Javed Sheikh) for another man long ago. Hence, Basit no longer shares a relationship with his mother, does not trust women or believe in love. On the opposite end is Ushna Shah who plays Ayesha, the middle child amongst three sisters whose father has passed away. Saba Faisal plays the role of their mother who seems to care more about money and running their house than her daughters’ happiness. Their single aunt also lives in the same house that struggles to make ends meet.

As fate would have it, Basit needs to get married in order to get access to everything that his father left him in heirship. Devoid of trust in women and relationships, Basit ends up marrying Ayesha as the last resort. We know that Basit is an honest man, but he also has a broken perception of relationships. Will their marriage survive, or will it end in ruins like Basit fears it might?

The relationship that Ayesha shares with her mother and sisters is also interesting to watch. The mother’s greed seems to no no bounds while the sisters all have personalities of their own. You can sympathise with one, root for another, and simply sit back and watch the path that the youngest carves for herself.

Yet another drama about marriage. Except that it deals with a very different aspect. Also with a star-studded cast on board that includes Saba Qamar and Ahsan Khan, Fraud deals with a group of scammers and the ripple effect they create wherever they go. Khan does an outstanding job at making us hate Tabrez, while we cannot help but empathize with Qamar’s character, Maya.

Written by Zanjabeel Asim Shah, Fraud aptly portrays the turmoil that a girl goes through in our society when it comes to marriage. Maya’s father may have made a mistake the first time and been scammed but his wish to get his daughter ‘happily’ married turns into a desperate death wish. It no longer matters what the social status of the guy is, as long as he agrees to accept Maya, a divorcee that our society loves to look down upon.

Brilliant performances by the cast combined with dialogues that hit the nail on the head each time, Fraud is one drama that perhaps every Pakistani family can relate to in some way.

If Tabrez in Fraud is an example of the kind of partner one should avoid at all costs, then Hamza from Mere Humsafar is probably the husband that every girl wishes for. Played by Farhan Saeed, Hamza has set the benchmark for the men on our screens quite high. Or maybe he’s doing what any respectful partner should be doing. The drama started off on a disturbing note. For weeks we witnessed Hala (Hania Aamir) being abused by her aunt (Saba Faisal) until Hamza returns home and marries her.

Over the course of their relationship, we saw Hamza build Hala’s confidence in herself and in their relationship. We saw Hala find her voice and the courage to face the truth, knowing that her husband will stand by her no matter what. We also saw Hamza beautifully handle his mother without ever being disrespectful towards her. Though the drama might be getting a little stretched now with episode 27 on air, Mere Humsafar has been a transformation worth watching.

Badshah Begum: A story of power and politics