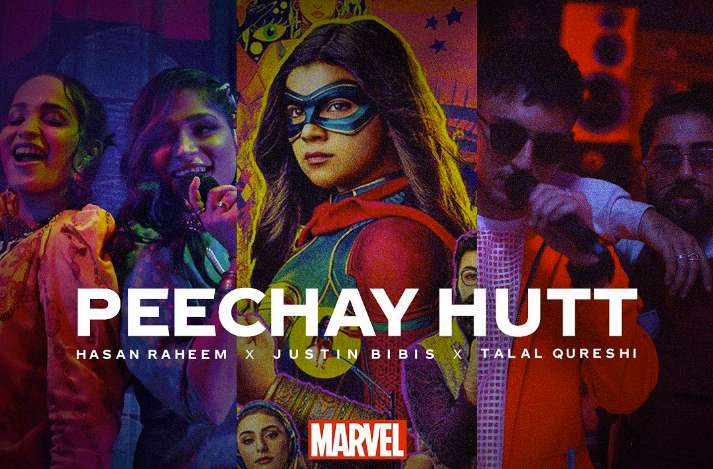 KARACHI: MCU’s Ms. Marvel has been winning over hearts lately and for all the right reasons. Featuring the first ever Pakistani Muslim superhero, the show has also included an impressive line up of Pakistani talent from Sharmeen Obaid Chinoy to Nimra Bucha, Mehwish Hayat and Samina Ahmed. And it does not stop there! Coke Studio producer Xulfi took to Instagram to share the exciting news that Ms. Marvel will feature the party anthem ‘Peechay Hutt’ as part of the soundtrack!

The news had been circulating for a while but the official confirmation came from Xulfi who took to Instagram to share his excitement with his fans, “Finally we can post about this ♥️ Coke Studio x Marvel ✨Elated to see Peechay Hutt from our @coke_studio season 14 becoming a part of the @marvel universe in @msmarvelofficial. Congrats to everyone involved in the effort.”

He also took the opportunity to express his appreciation for the show and its inclusivity, “Also, I’d love to add one more thing. A Marvel superhero from Pakistan, Kamala Khan, is probably one of the most wonderful news for our country. The global positive impact of it will keep unfolding in infinite amazing ways with time. “

‘Peechay Hutt’ which features Hasan Raheem, Justin Bibis and Talal Qureshi can be heard in a clip from Ms. Marvel that was shared by Marvel Entertainment on Instagram.

‘Peechay Hutt’ is not the only Pakistani track being featured on Ms. Marvel. Just a few days ago, rapper Eva B also took to Instgram to announce that the show was also featuring one of her tracks titled ‘Rozi’ as a part of their soundtrack and wrote, “I am feeling greaaatttt and so lucky that i got a feature in @msmarvelofficial ’s 1st episode.”

It is safe to say the premiere of Ms. Marvel in Pakistan cannot come any sooner!