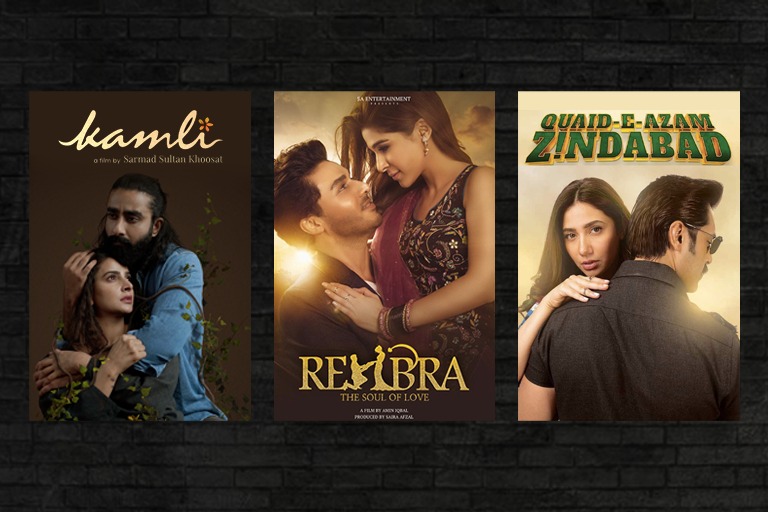 KARACHI: With local cinema picking up after a long hiatus, there is a long list of upcoming Pakistani movies to look forward to in the next few months. The hiatus gave filmmakers a chance to prove that Pakistani movies can go beyond the cliched storylines and the upcoming movies prove just that. From dark and mysterious, to action and drama and even comedy, the upcoming films are ready to explore these genres and more.

Staring Ahsan Khan and Ayesha Omar as leads, Rehbra tells the story of two people who meet on a train to Karachi. Both of them have partners of their own and Bubbly (Ayesha Omar) is all set to get married. But the spark is undeniable and the connection is instant.

But no love story is complete without drama. Will they be able to overcome the hurdles and will their love conquer all? While the story seems like a run-of-the-mill plot, the chemistry between Ahsan Khan and Ayesha Omar is off the charts and it will be an experience to watch them share the screen! The film is set to hit cinemas on June 24.

Fahad Mustafa and Mahira Khan fans are in for a treat with this upcoming Pakistani movie. There has been quite a bit of hype with the movie since its teaser released back in 2020 but very little has been revealed about what the movie is actually about. Little is known other than the fact that it has a whole lot of action and Mustafa can be seen playing a police officer. Two years later, however, the film finally has a release date! Taking to social media, filmmaker Nabeel Qureshi announced that the much awaited project is hitting cinemas on Eid-ul-Azha 2022.

A sequel to the 2017 movie, Punjab Nahi Jaungi, the next Mehwish Hayat and Humayun Saeed-starrer has been shot in Turkey, with some scenes reportedly shot in London as well. While not much is known about London Nahi Jaunga, and the team is yet to release a trailer or announce a release date, the film has wrapped up shooting. In an Instagram post earlier, Humayun Saeed hoped that the film will release on Eid-ul-Azha 2022 while Mehwish Hayat recently disclosed that she has finished dubbing for the film. Other actors part of the film are Kubra Khan, Vasay Chaudhry and Gohar Rasheed.

Kamli teaches upcoming Pakistani movies how to move out of the box of cliches and into a genre that has not been explored before. And we could gather all this just from the trailer and songs!

Kamli has been described as a “a tale of love, loss and cloaked secrets.” The new movie will star an exceptional female cast with includes Saba Qamar, Sania Saeed, Nimra Bucha and will also introduce newcomer Hamza Khawaja. From the trailer, it seems as though the movie is set in a remote area where women are the ones in charge but they seem to be haunted by an unknown force. There is bloodshed and burning rooms, and yet there is no explanation to these things, which only intrigues the audience further. Where there is romance, art and adorable animals, there is also violence, danger and mystery. To add to the eeriness of the plot is the background music which keeps us on the edge.

With premieres already underway and nationwide release just a few days away, we could not be more excited!

Amongst all the upcoming Pakistani movies, this one might be the underdog but in no way does it compromise on quality. It tells the tale of adventure and survival and promises to keep you on the edge of your seat!

Directed by Arsalan Majid, Beyond the Wetlands takes the audience on an unforgettable journey to the snow covered K2 as a group of mountaineers struggle to survive their trek. We learn that the group set off on the trek as part of their university project on global warming when an unexpected injury and a sudden lack of communication breaks them up. While the stranded men struggle to survive, their friends team up with the locals and experienced mountaineers to save them.

For a few, the movie, Beyond the Wetlands, seems to be based on the tragic demise of legendary mountaineer Ali Sadpara. However, the filming had begun much before Ali Sadpara made his last trek. But with circumstances eerily similar, the movie does evoke emotions we all felt when we bade farewell to the legend.

With the movies set to release over the next couple of months, we cannot wait!