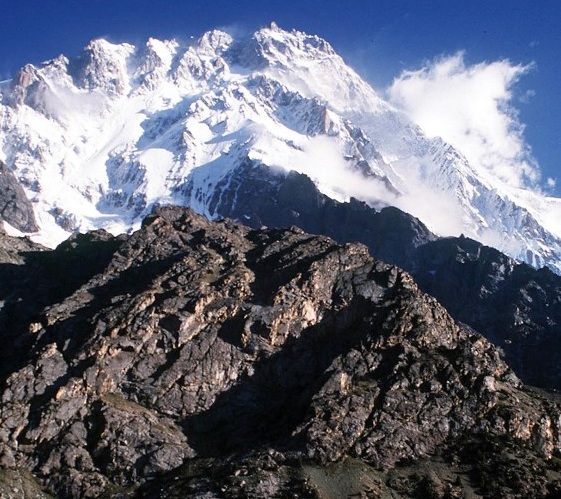 KARACHI:  Two foreign mountaineers Daniele Nardi from Italy and Tom Ballard from the UK, who were making their way to up to Nanga Parbat mountain though a new route, the Mummery Spur, lost touch from the camp on Sunday. The two are feared dead, according to Dawn.

Nanga Parbat is known to the world as the ninth highest mountain. At 8,126m of height, it is often referred to as the ‘Killer Mountain.’

Nardi and Ballard started on their mission to summit Nanga Parbat in early January with other Pakistani mountaineers, Rehmatullah Baig and Karim Hayat. The two Pakistani climbers quit after the bad weather buried their tents in the camp but the two western climbers continued, according to DAWN.

Read:Indian woman becomes first to climb a male only mountain

Ballard lost his mother, Alison Hargreaves on K2 in 1995. This was three months after she became the first woman to climb Everest unsupported and without oxygen, according to The Guardian.

The Guardian has reported that Pakistani rescue teams have been involved in a search operation with Ali Sadpara, the first Pakistani to climb the mountain in 2017. A helicopter search of the mountain was rescheduled last night. Due to escalating tensions between Pakistan and India, the rescue operation had to be delayed as the Pakistani airspace was closed down for flights. While the airspace is scheduled to be open on Friday morning, according to Civil Aviation Authority (CAA), it was decided that the Army Aviation rescue operation would commence Thursday morning.

While the operation is underway, reports are surfacing that there is no sight of the two mountaineers nor any spotting of tents on the Mummery route, as yet.

Support and concern pouring in for the two mountaineers from the international community:

Rescue helicopter to search for 🇮🇹 Daniele Nardi and 🇬🇧 Tom Ballard is flying and approaching area of Nanga Parbat where they could be. 🇵🇰 Ali Sadpara is on board. Weather still conducive to search. Praying for a speedy and positive outcome. Thank you to Pak Army for assistance.

Update: The weather cleared up a little bit on Skardu-Nanga Parbat route which has allowed #PakistanArmy to drop off the rescuers at Nanga Parbat BC. The pilots have also tried to track the Daniele and Tom, but unfortunately couldn’t be sighted. https://t.co/P4ZJXkegIP pic.twitter.com/FH6BT5I5Nc

#NangaParbat winter expedition update: Search operation for mountaineers, Daniele Nardi (Italian) and Tom Ballard (British), continues. Pakistani mountaineer Ali Sadpara is on board. Thanks to #PakistanArmy for assistance even at this crucial time 🇵🇰 Praying for safe return pic.twitter.com/Auh6xuubr3