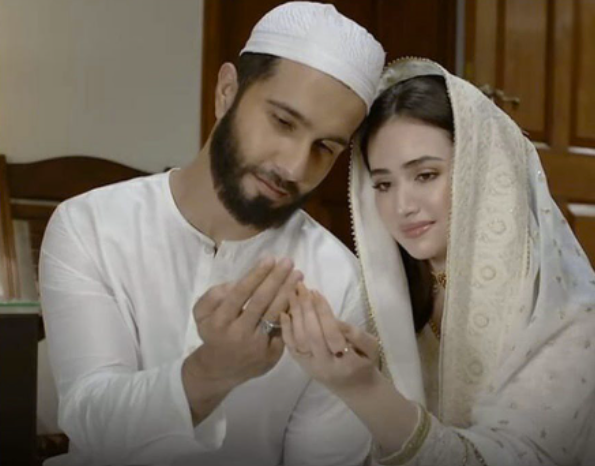 KARACHI: There are good dramas and then there are bad dramas. And then there are dramas such as Aye Musht-e-Khaak that make us wonder how the show got the green signal to go on air in the first place? For the duration of 36 episodes, the drama went from cringe worthy to hilarious to becoming one of the most overused storylines that could exist. But alas the show finally came to an end as the last episode of Aye Musht-e-Khaak aired on April 12, leaving audiences divided over the ending.

As it would turn out, there are quite a few people who thoroughly enjoyed the drama. They were all praises for Feroze Khan and his “wide range of emotions.” They were in awe of how he went from brooding, mumbling Bobby to good boy, serene and emotional Mustajab.

Some people were in awe of Feroze Khan portraying an ashiest despite being so religious in his personal life (basically praising him for doing his job as an actor).

Imagine being a religious person&you gotta act as an atheist!! this would've been sucha challenging task! yet he portrayed it so brilliantly! @ferozekhaan deserves every bit appreciation for his outstanding performance as Mustajab Ahmed👏#FerozeKhan#AyeMushtEKhaak pic.twitter.com/YpN923Bn7S

Others were emotional about Feroze Khan finally getting the girl i.e Sana Javed (because in their previous drama, Mir Hadi could not manage to get the girl whose brother he killed and then proceeded to stalk, threaten and kidnap. The grief!).

If YouTube comments are anything to go by, the drama even managed to convert a fan to Islam.

However, others were not too impressed with Aye Musht-e-Khaak and its last episode. Some could not stand the “wholesome” joining of hands in prayer image.

Aye Musht e Khaak last episode: Feroze Khan did teach us two things. First was that in sajda we have to raise our bottom high. Second was if husband and wife are in dua mode sitting side by side, praying individually isn’t necessary. One hand of each joined in prayer is enough.

Others pointed out how overdone the storyline was, especially for the actors in the drama.

Aye Musht-e-Khaak and its last episode evoked some intense feelings of lost loves.

Some also pointed out that the drama strengthened friendships (and possibly weakened relationships).

It is always fascinating to see just how diverse our audience’s tastes are for entertainment!