Between Feroze Khan's fake accent and gaudy night suit and Sana Javed's flimsy dupatta that refuses to stay on her head, the drama offers nothing new in terms of the storyline. 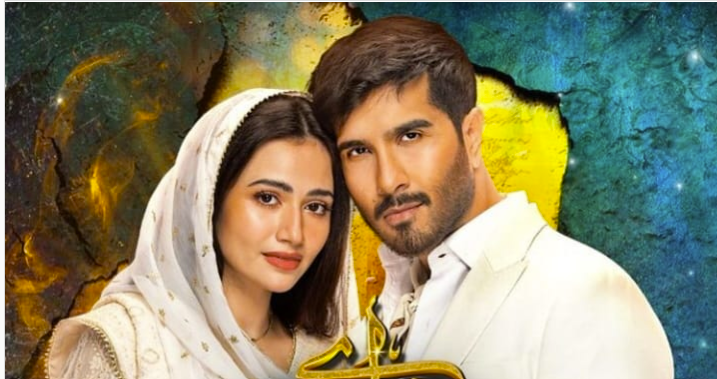 KARACHI: If you’re someone who enjoys extreme whiplash when it comes to character personalities, insufferable accents, a goody two shoes female lead and oblivious parents then Aye Musht e Khaak epiode 5 will be a treat to watch for you! For the rest of us, it’s nothing short of a frustrating mess. If you want to know what we’re talking about without watching the show, here’s a recap of what went down in Aye Musht e Khaak episode 5.

The episode begins with Shakeela, Bobby/Mustajab’s (Feroze Khan) mother crying and whining to Dua’s (Sana Javed) parents about how her son has gone off the grid because like a two year old, he’s throwing a tantrum because he didn’t get things his way. We’re not sure how that isn’t a glaring red sign for Dua’s parents considering just how good to be true their daughter is. Sure they express some concern but that’s extremely short lived and suddenly the family jumps straight into marriage. Though as the episode goes on, we start getting answers as to why Dua’s parents ignore the red flags and that’s because they can’t believe that they’ve snagged such a great rishta for their daughter. One that has all the people talking and gushing about Dua’s good naseeb.

Usually parents offer good advice to their kids but Aye Musht e Khaak episode 5 makes it clear that isn’t the case for the parents in this show. Dua’s mom very clearly ignores her daughter’s concerns about how she feels that things aren’t going too well between her and Mustajab but her fears fall on deaf ears. Even if we put off Dua’s concerns as pre-wedding jitters, what about the fact that even her brother has his concerns? But mother dearest tells him off for being too close to his sister and effectively cuts him off by telling him to get a job and get married.

As far as Shakeela is concerned, we wouldn’t really expect good advice from her. Between coddling her grown up son and feeding into his obsession, the very fact that she lets Mustajab get away with wearing such a gaudy plum colored satin night suit shows that she can’t be trusted!

And since we’re on the topic of Bobby/Mustajab/ man child, it’s really hard to choose which personality trait we dislike the most about him. But if we have to choose, we’d probably narrow it down to his fake accent and the fact his personality changes give us whiplash. Aye Musht e Khaak episode 5 begins with him in tears trying to manipulate Dua into marrying him. He’s shaking and his voice is barely above a whisper which makes it really hard to understand what he’s saying and his dialogue makes him seem a bit unstable. Yet, somehow Dua finds it endearing. She agrees to marry the man she knows is the complete opposite of her and doesn’t question why he’s rushing into things with her.

But then in the span of ten minutes, he transforms into an arrogant man and then transforms into someone with extreme anger issues. To be fair, we don’t blame him for getting mad at Dua who doesn’t seem to understand the concept of Nikkah, but really, who blows their lid because their wife isn’t comfortable with PDA?

Dua’s character isn’t too far off when it comes to being unbearable. We get that she’s supposed to be the good girl to Feroze Khan’s bad boy persona but she’s too good to be true which makes her character hard to digest. From the way she converses in Urdu not even our grandmothers do in their everyday conversations to the flimsy dupatta that just doesn’t stay put on her head, her character feels forced. Between thinking the ideal date between husband and wife is at a mosque to telling her husband that their Nikkah means they need to maintain distance (pretty sure it’s the exact opposite), she comes off as incredibly silly. Her shock at the fact that her husband doesn’t pray or isn’t religious is also unbelievable because Mustajab never hid his lifestyle from her and she willfully ignored all the red flags.

It seems as though both Feroze Khan and Sana Javed have fallen pray to being typecast. Khan, it seems, will forever play the guy who pines after the one girl who he shouldn’t and Javed will play the girl who agrees to marry the one man who she shouldn’t.