A timeline of the Zahir Jaffer court case 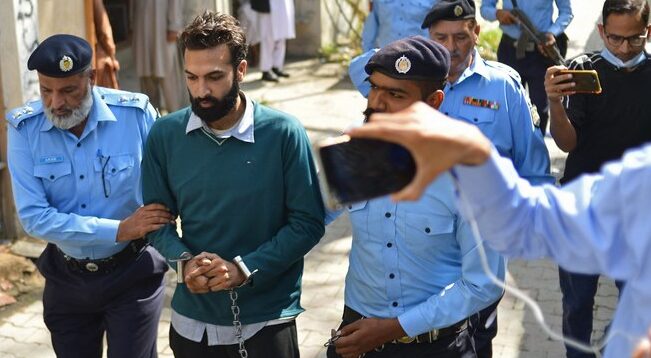 KARACHI: It has been over six months since Noor Mukadam was kidnapped, raped, tortured and eventually murdered and beheaded. The case was shocking to say the least and resulted in public outcry for swift justice for the Mukadam family. However, as the case moved into its trail phase, there were so many twists and turns that it became hard to keep track of all that was happening. Here is a timeline of the Zahir Jaffer case, up until the most recent development.

24th February, 2022 – Zahir Jaffer was sentenced to death by Islamabad High Court. Jaffer’s gardener and guard were sentenced to 10 years of imprisonment each. Jaffer’s parents and all employees of Therapy Works were acquitted.

Parents of Zahir acquitted and Therapy works have been acquitted.
Zahir sentenced to death. 2 of the house staff have got 10 years. #JusticeForNoor

16th February – Zahir Jaffer’s lawyer, Sikandar Zulqarnain Saleem, made a last minute attempt to implicate another suspect in the murder of Noor Mukadam. In his final argument, the defense counsel alluded that perhaps the case was a matter of honor killing and questioned why Noor Mukadam’s brother had not been questioned. “This is a matter of live-in relationship (between Noor Mukadam and Zahir Jaffer), frayed emotions could overwhelm anyone and it could be a matter of honor,” Jaffer’s lawyer tried to cast doubt about the events that led to Mukadam’s death. He also suggested that “Zahir Jaffer may have locked her to save her from someone.”

The defense counsel decided to go all out with their accusations from accusing the IO for fabricating a story against his client to even going as far as to say that the parents of the victim “should also be charged with negligence.”

14th February – Zahir Jaffer submitted a written statement in court stating that he is innocent. In the statement, Jaffer also claimed that Noor Mukadam’s family has falsely framed him to get money out of him. Jaffer also accused the police of replacing Noor’s phone with another one to fabricate evidence against him.

Thread-#ZahirJaffer submitted a written statement to court today full of absurd false allegations:
– He said he is innocent and the rest of the accused are innocent too
– Noors family is falsely framing him because they know his family is well off and they want to get money.

9th February – Zahir Jaffer recounted his admission of guilt in the case and denied murdering Noor Mukadam. He insisted that Mukadam had shown up to his house with drugs and “and kept on insisting on a party.” He claimed that he woke up from a drug induced haze to find himself tied up and Mukadam murdered by someone present at the party. Jaffer also claimed that “state machinery and the media were used against me,” and that proper legal proceedings were not adhered to.

8th February – In a letter written by Atta Rabbani, the Judge ruling over the Zahir Jaffer case, the trial court requested that more time be granted to the court to reach a verdict. This was in response to the 2 month time frame set by the Islamabad High Court. Judge Rabbani, in his letter, explained that between the various petitions that delayed court proceedings and having to set dates according to the availability of the Islamabad residents, the case kept getting delayed.

17th to 24th January- On the 17th of January, Zahir Jaffer’s lawyers declared his mental health to be unstable and make a show of it by having him arrive to court on a chair one day and on a stretcher at the next proceeding. However, despite their attempts, an independent medical board declared Zahir Jaffer mentally fit to face the court and, to no one’s surprise, he arrived on foot for the next case proceeding.

1st December, 2021 – Zahir Jaffer’s lawyer’s declared that their client is mentally ill and that an “authorized medical board according to the commands of legislature and local and international law” should be appointed to determine his mental state. However, as per police testimony which was also presented before the court, Zahir Jaffer had been mentally sound and in his senses when he was arrested on 20th July after he had raped, murdered and beheaded Noor Mukadam

12th November – Zahir Jaffer, the main accused in the brutal murder of Noor Mukadam, was thrown out of jail for the second time. Over the course of his hearing, Jaffer was continuously being disruptive and had received a fair share of warnings from the judge. From speaking out of turn to hurling abuses at the judge presiding over the case, the court has forcefully removed Zahir Jaffer from the courtroom in order to maintain discipline and allow the case to move forward.

18th October – In a surprising turn of events Asmat Adamjee, the mother of Zahir Jaffer, a prime accused in the Noor Mukadam murder case, was granted bail by the Supreme Court. Asmat Adamjee was granted bail on the basis of a surety bond of Rs.1 million. The court had asked for evidence in her role in the murder of Mukadam. When presented, the court found that her role in the crime was “secondary.” The judge residing over the case, Justice Umar Ata Bandial, stated that there was no evidence of Adamjee’s involvement in the crime. On the other hand, the same court rejected the bail application for Zahir Jaffer’s father, Zakir Jaffer. The court had rejected his plea to overturn the decision of the Islamabad High Court that rejected his bail petition.

14th October – The prime suspect in the Noor Mukadam murder case, Zahir Jaffer, was finally indicted and found guilty by the Islamabad High Court. Along with Zahir Jaffer, both his parents Zakir Jaffer and Asmat Adamjee, two of their household staff members, the CEO of Therapy Works, Tahir Zahoor, and six employees from Therapy Works were also indicted in the case. Jaffer was accused of kidnapping, raping, brutally murdering and beheading Noor Mukadam, the daughter of a former diplomat.

29th September – The accused’s parents, Zakir Jaffer and Ismat Adamjee, were denied bail yet again by the Islamabad High Court. Despite maintaining that they had nothing to do with their son’s actions, an interim challan revealed otherwise. As per the interim challan, after murdering Noor Mukadam, Zahir Jaffer had called his father and told him about what had happened. Zakir Jaffer allegedly told his son not to panic and that, his “men were coming to dispose of the body.” The challan also stated that if Zakir Jaffer had called the police on time, Mukadam would still be alive.

10th August – As the quest to find justice for the grisly murder of Noor Mukadam continues, a recent update about the case was shared with the public. It was announced that all the suspects involved in the case, including the parents of the accused, have been placed on the Exit Control List (ECL).

On July 18th, he made arrangements for a taxi to take him the airport. He contacted Noor Mukadam who came to visit him. At 2.15 am on July 19th, Jaffer and a barefoot Noor head to the airport in the taxi but turn back because they were “too late.”

On July 20th, Noor’s friends and family failed to reach her. The next day, Noor sent a voice note to her mother at 10.43 am. That was the last communication she had with her family. The same day, it was determined that Noor was tortured and murdered by Jaffer between 1 AM and 7:30 PM.

Zahir Jaffer was arrested on the spot of the crime on 21st July.

*This is a developing story and is subject to updates.