Many people, including Mukadam's family and friends, gathered outside the Islamabad Press Club in solidarity with the Mukadam family in lieu of her murder trial. 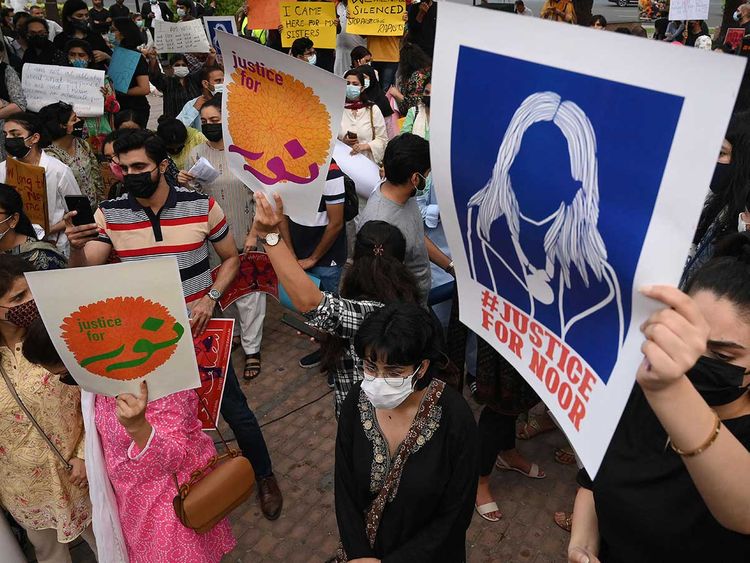 KARACHI: A peaceful protest was held outside the Islamabad Press Club on Wednesday, a day before the Noor Mukadam murder trial was set to begin. Co-organized by her sister Sara Mukadam and hosted by actor Osman Khalid Butt, many people gathered to show solidarity with the family and extend their support in their difficult time.

A large number of people came to express solidarity with parents of late #NoorMukadam and seeking #JusticeForNoor. 1/3 pic.twitter.com/gQl9W15Bgx

The demonstration began after 4pm and was followed by a vigil and over 200 people. Noor’s father and sister attended the demonstration with placards and this was the first time her family gathered to address the public after the horrific murder. Sara Mukadam recited a poem for her sister and expressed her love for her sister and grief, “My better half, my better version, my soulmate and now I will have to live incomplete without you for the rest of my life.” Noor’s father also addressed the crowd that had gathered and expressed his gratitude to Imran Khan for taking an interest in the case and assuring the family that justice will be served. He went on to say, “I want all the daughters of Pakistan to stay safe. May they never see these days. My mission in life for justice for Noor and for Pakistan’s women to feel safe in their homes, their offices and on the streets.”

Noor’s father asks for the highest punishment for her murderer and his accomplices.
It was deeply moving to hear the tributes and poems by her sister and the family. One couldn’t help but weep to be a witness to their dignity and pain. #JusticeForNoor pic.twitter.com/eoWjrC6xIs

Osman Khalid Butt also spoke at the protest and said, “We see a new hashtag everyday. We see injustice everyday with women and so it is so easy to become desensitized. As a nation we need a reminder, we all need to be reminded that Noor was a living, breathing human with hopes, aspirations, with dreams that were all brutally snuffed out. We must refuse to let Noor become just another number or yet another statistic.”

Osman Khalid Butt, the only true man, always standing up for the right!! @aClockworkObipic.twitter.com/h7V1Q0wTbH

As the murder trial has begun Zahir Jaffer and 12 other people have been indicted in the Noor Mukadam murder. Jaffer along with six other people were presented before the court today for a bail hearing.