Out beyond ideas of cousin marriages and love triangles, there is watta satta, a field that we need to get out of 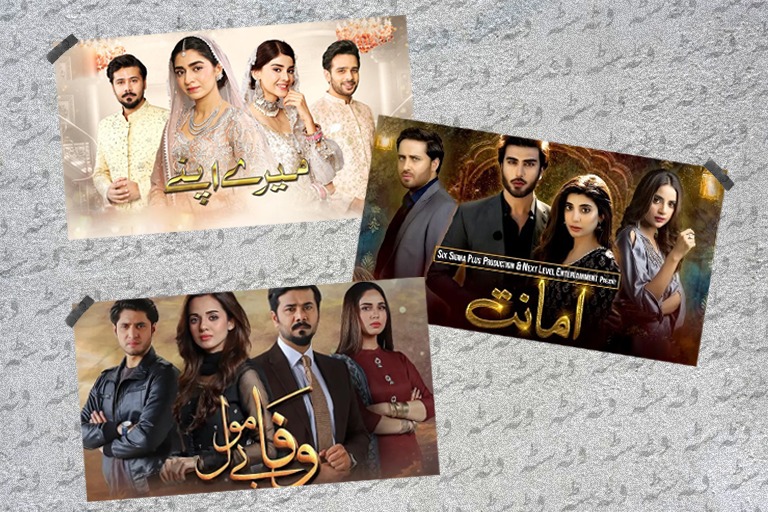 KARACHI: 2021 seems to have introduced a number of trends in the local drama industry. With numerous storylines created for audiences, many of them continue to share and promote certain themes. Earlier this year, a number of our dramas revolved around the theme of cousin marriages while love triangles have also been a popular choice for storytellers. However, now an emerging trend in the world of drama is that of watta satta. An age-old practice of exchange between two families, watta satta means one pair of siblings being married off to another. While this exchange might be years old, we wonder why multiple Pakistani dramas currently on air are promoting the practice, and in the worst way possible.

What's up Pakistani writers these days and the concept of watta satta??? I means every single dramaaa

Even if one were to count the number of dramas that are currently based on the concept of watta satta, four names would immediately pop up: Mere Apne, Qissa Meherbano Ka, Amanat and Wafa Be Mol. Perhaps Mere Apne is the only drama that categorically introduces watta satta as its central theme. From its very first teaser, audiences can gauge that the wedding taking place is between two pairs of siblings, played by Hajra Yamin, Usama Khan, Zainab Shabbir and Ali Abbas.

The other three productions might get away with saying that they are not entirely based on the concept of watta satta but that does not mean that the underlying theme does not steer the plot into a predictable direction. Imran Abbas and Saboor Aly starrer Amanat, starts off with two pairs of siblings set to marry one another but quickly diverges into the direction of violence and unnecessary drama as a fifth character comes into the equation in the form of Urwa Hocane. The other Hocane sister, Mawra, currently plays lead in Hum Tv’s Qissa Meherbano Ka, in which she is the bechari daughter who had to be sacrificed because of her brother’s decision.

Qissa meherbano ka. Song has been on loop sincw 2 days, plot is based on the fact that she got nikkahfied in watta satta 10 yrs ago and the guy never did rukhsati bec her bro divorced his sister……. like?????

Wafa Be Mol, a show that airs five times a week on Hum TV reiterates the same concepts of watta satta and spiteful in-laws. Of course, we are aware that practices like watta satta were and continue to be practised in our part of the world but to argue that television is only portraying what goes on in real life would not be convincing. Are practices like watta satta really so common in our country that four dramas need to be simultaneously aired to convince our audiences? Are the rich actively contributing towards these practices, as portrayed by the characters of Amanat and Mere Apne since these storylines are not based on low-income groups or rural citizens? In many situations, watta satta is a power dynamic where girls are sacrificed in the name of marriage or used to eliminate dowry from both sides. Why do we want to take away from the narratives of the less privileged? Why do our writers not want to take their stories and tell them as they are, in order to address issues that are less talked about? Why must we glamorize everything and sell it to masses who cannot relate?

Surely, it can also be pure coincidence that a sister and brother happen to find partners in the same family which then would not make their marriages a typical case of watta satta. But then why do characters like Zunairah (played by Saboor Aly) in Amanat constantly utter dialogues like “agr meri shaadi nahi hui toh uski bhi nahi honay dungi” (If I don’t get married, neither will my brother)? These words only directly equate one couple’s happiness (or lack of) to another while giving one character the power to ruin multiple lives. Mere Apne, too, has sentences like “agr meri beti ko taqleef pohanchi toh tumhari behen bhi khush nahi rahegi” (If my daughter gets hurt, your sister won’t live a happy life either) in its script.

As usual, women are made targets of all kinds of punishment. It is women who constantly have to live through the verbal and emotional abuse, all the while living up to the image of the ‘good’ woman. As shown by Wafa Be Mol or even Mere Apne, men can go on living their lives even if the marriage breaks. They are quick to find themselves another partner while women like Meherbano (played by Mawra Hocane in Qissa Meherbano Ka) spend a lifetime being alone, trapped by the clauses of a Nikkahnama.