Speaking to reporters outside courts, calling out 'fake accounts' and crying on national TV, the singer-actor has had a busy week 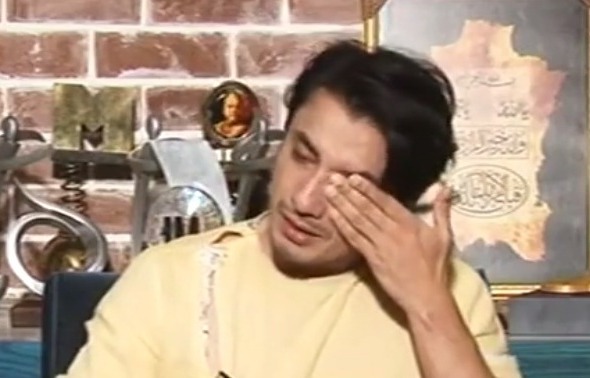 KARACHI: Ali Zafar has had a busy week giving interviews left, right and centre about the sexual harassment allegations made against him by Meesha Shafi for the first time since filing a defamation case against her.

His remarks came amid a boycott of the Lux Style awards announced by some artistes, including Shafi, to protest the inclusion of Zafar’s name in the nominees list.

While Zafar has been tweeting, launching hashtags, speaking to reporters outside courts and crying on national TV, Shafi had been silent due to a gag order placed on her in the defamation suit, according to her lawyer Nighat Dad. However, Shafi broke her silence and gave an interview to Geo the following day.

Here is a list of some the instances Zafar has spoken about Shafi and the harassment case:

“It seems anyone can place accusations against you for personal gains and then leave for Canada for immigration.

God knows better about her intentions but fact is I was targeted for personals gains and she wants international recognition and become like Malala,” Zafar said while speaking to the media outside court.

He mentioned the Canadian immigration on three occasions. However, when questioned about it in an interview with Geo, he said he has heard people say so.

During the interview, host Shahzad Iqbal mentioned that Shafi had received her Canadian PR in 2016, well before she made the accusations against him.

The host also stated that by his logic, he’s implying that Malala staged a drama to get international recognition, a misplaced yet popular opinion in Pakistan.

Zafar responded saying that if someone was offended by this comment, he would retract it.

#Malala is a true warrior who stands for truth and justice having made great sacrifices. Meesha cannot become her by lying and running away from justice hiding behind fake profiles on social media. #FaceTheCourtMeeshaShafi

That brings us to the second instance.

Speaking to reporters, Zafar stated: “Those who are truthful come to court without being summoned and those who don’t … I’ll leave it your imagination about what they’re like.”

“I request Meesha to come to court and face the court.”

However, Shafi’s lawyer clarified that Meesha has not been summoned by court and once she is directed to attend hearings, she will do so.

Meesha has not been called by the court as of yet, she will go once court will direct her too. Why lawyers are there? To represent her client. Our case on sexual harassment has never been heard on merits. Dismissed on technical grounds, order is challenged in the LHC.

At several occasions, Zafar has stressed that he wants people to know that he’s innocent in the eye of the law and that Meesha’s case has been dismissed. However, this isn’t entirely true since the court was not dismissed on merit but on a technicality. Let us explain:

In 2018, Shafi filed a complaint against Zafar under the Protection Against Harassment of Women at the Workplace Act of 2010. The case was dismissed by the provincial ombudsperson on the basis that Shafi didnot have an “employment relationship” with the party against whom the complaint was filed i.e. JS Events, according to Dawn. Shafi’s team has filed an appeal, which is still pending in the Lahore High Court (LHC).

The court did not absolve Zafar, meaning no one was deemed ‘innocent’. The case could not be upheld under the workplace harassment act.

Speaking to Geo, Zafar said that all men should join hands to create a safe space for women. He said that through his foundation, he has been helping female survivors of sexual abuse with rehabilitation. If you look at my concerts.

“There’s a song ‘Papa khete hain bara naam kare ga,  beta humara aisa kaam kare ga. I say expect such things from sons only? Why not our daughters? Jaise men rights hain, waise women rights hain,” he stressed before saying that he decided to speak up because it makes him “sad and upset” that the movement for women empowerment is being misused for personal gains.

During the interview, Iqbal pointed out that it’s incredibly hard for a woman to come out with sexual harassment/abuse accusations given that they are the ones who suffer the most. He then went to ask what a successful and established woman like Meesha Shafi would have to gain personally from this. To this Zafar replied, “Ask her.” He then went on to bring up the Canadian immigration again.

During the interview on Geo, Zafar also cried while talking about what his family has gone through the past year. He said that when a woman places such accusations on a man, she can ruin him. He went on to read out the Urdu translation of a suicide note by a Mexican musician who was accused of harassment.

5. ‘Meesha’s mother should have phoned my father if she had a problem’

Zafar mentioned Shafi’s mother, actress Saba Hamid, and said he respected her and that she was his father’s student. He went on to say that since the family knew each other, her mother could have informed his father or Shafi could have spoken about it to his wife. He also said that the other three to four women who came out with similar accusations or anyone with reservations and doubts, can “come to my house, have tea with us and discuss it but not on social media”.

He said his door is always open and he is willing to hear what the other has to say, before saying the following final quote we selected:

6. “Even if I stepped on an ant and it said you stepped on me, I would say sorry”

Watch the entire interview below:

Posted by Naya Pakistan with Shahzad Iqbal on Sunday, April 28, 2019