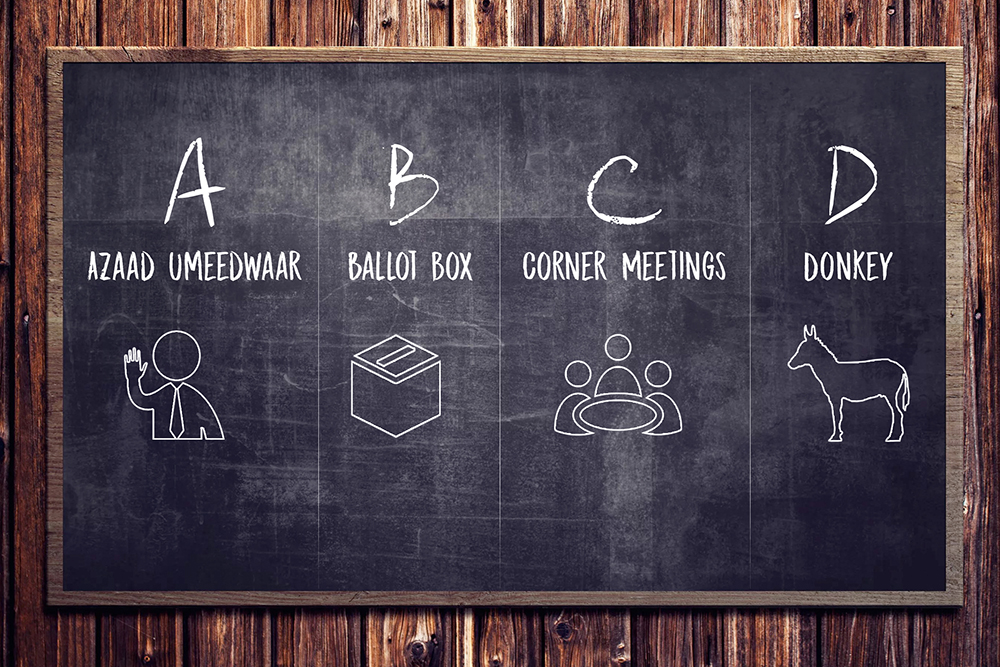 KARACHI: Election day is two days away and it’s the only thing everyone is obviously talking about. We compiled a list of words, phrases and names that are directly or indirectly linked to Pakistan’s upcoming polls to keep you in loop ahead of the July 25th elections.

Watch: Explainer: How does democracy work in Pakistan?

Avenfield Reference: This has nothing and everything to do with the elections at the same time. Following the verdict from the Avenfield case, the former prime minister and his daughter Maryam Nawaz are barred from contesting elections. The Sharif family’s ownership of Avenfield properties, an apartment block in London’s most expensive district, was revealed in 2017 through Panama Papers. As a result, Pakistan Muslim League-Nawaz (PML-N) is left under the supervision of Shehbaz Sharif.

Ballot Box: A temporarily sealed container, present at a polling booth, in which you can put your voting slips to caste your vote.

Bilawal Bhutto Zardari: Chairman of Pakistan Peoples Party Bilawal is leading his party into the upcoming elections. He is the son of the late Benazir Bhutto and grandson of former prime minister Zulfiqar Ali Bhutto.

Corner Meetings: A small gathering organised in neighbourhoods by political parties and candidates to campaign for elections. The candidates address residents of the neighbourhood in such meetings and convince them to vote for them.

Constituency: An electoral district or a group of voters in a specific geographical area who elect a representative to a legislative body.

Clean sweep: A victory in which all electoral candidates of one political party win.

Donkey: Donkeys are the official symbol for the Democratic Party in the United States. But this is Pakistan and by adding donkey to the glossary we mean literally a donkey. A donkey was recently rescued by an animal rights foundation in Karachi after it was found beaten and bruised with a political slogan written on its body. Named Hero, he unfortunately passed away today.

Dharna: Dharna is a non-violent sit-in protest. Anyone who witnessed the previous general elections will be well aware of the term. Imran Khan’s PTI announced a four-month-long dharna following claims of dhandli last election cycle.

DJ Butt: DJ Butt was a regular feature in these dharnas

Election Commission of Pakistan: Established under the constitution, the ECP is an independent and autonomous federal body that is responsible for organizing and conducting elections.

Fascism: This refers to an authoritarian and nationalistic right-wing system of government.

Garh: Garh in Urdu means the stronghold geographical area of a political party in terms of popularity and power.

Hung Parliament: A hung parliament refers to a situation where no political party has enough seats to secure an overall majority and hence there’s a conflict deciding which party’s candidate will become the next prime minister.

Imran Khan: Cricketer-turned-politician and chariman of Pakistan Tehreek-e-Insaaf (PTI) who is vying to become the next prime minister.

Khalai Makhlooq: A term used to refer to the alleged interference of the establishment in the upcoming elections. This was first used by Nawaz Sharif to point out the meddling of the country’s intelligence in political matters.

Lotay: A derogatory term used for politicians who keep changing their affiliation from party to party

Minorities: A term that collectively refers to non-Muslims settled in Pakistan. They have 10 reserved seats in the country’s National Assembly.

Na-Ahal: Urdu for disqualified. This term surfaced when former prime minister Nawaz Sharif was ousted on the basis of corruption charges and disqualified from contesting elections ever again.

Naya Pakistan: Naya meaning new. Naya Pakistan is what Imran Khan has promised his followers if he is elected as PM.

Overseas Pakistanis: This is a term used for citizens who are settled outside of Pakistan including those who have migrated to another country as well as those people of Pakistani descent who are born abroad. This category of people, however, are not allowed to vote in the upcoming elections.

Polling station: A government building where voters gather to cast their vote. Under exceptional circumstances, polling stations can also be set up in private buildings but on the condition that those buildings are not controlled by any of the candidates contesting for that seat.

Polling booth: An enclosed space or cabin in a polling station where voters can cast their vote in private to protect the secrecy of the ballot.

Qaumi Assembly: Urdu for the National Assembly of Pakistan which is a democratically elected body consisting of 342 members. Of which 272 are directly elected members while 60 seats are reserved for women and 10 for religious minorities.

Vote: One of the founding elements of democratic system of government where you decide who you wish to be governed by.

Xenophobia: The fear of the ‘other’ or the general dislike of or prejudice against people from other countries. This is rooted in philosopher Thomas Hobbes’ political theories which basically suggest that the only way of uniting a group of people is by creating fear of an external enemy. An example of this could be to create fear of the growing influence of Western culture in a political campaign.

Youthia: This is a derogatory term used for some PTI supporters.

Yahoodi Saazish: Can be literally translated to Jewish conspiracy. Although the term is very often and casually thrown around and all times and occasions, you’ll probably hear it more than usual during election season.

Zia-ul-Haq: Muhammad Zia-ul-Haq was a military dictator who served as the sixth president of Pakistan from 1978 until his death in 1988, after he declared martial law in 1977. Make sure you read up everything on him before you go out to vote this year.