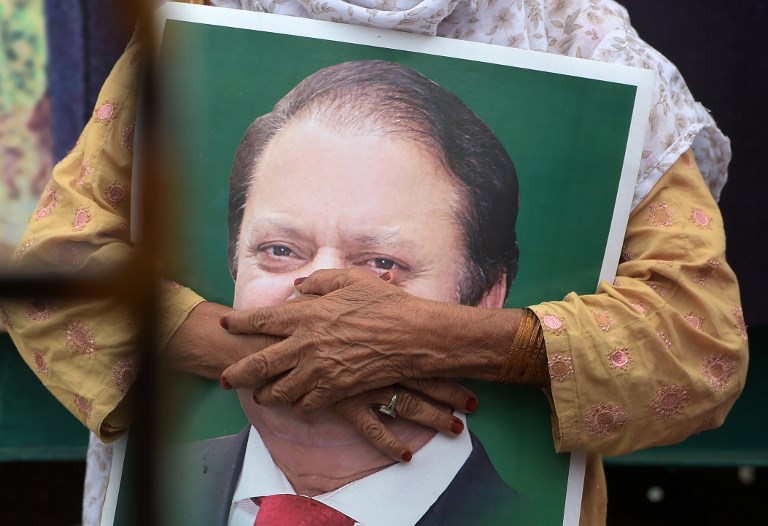 A supporter of ousted former prime minister Nawaz Sharif holds his picture at the venue where his younger brother Shahbaz Srarif will lead a rally towards the airport ahead of the arrival of Nawaz from London. PHOTO: AFP

KARACHI: Ousted prime minister Nawaz Sharif and his daughter Maryam Nawaz are set to return to Pakistan tonight to face their fate after an accountability court slapped jail sentenced on both. It’s been a week they were sentenced to imprisonment over corruption charges in the Avenfield reference.

Reports suggest the father-daughter duo will be arrested as soon as they land in Lahore and will be flown to Islamabad soon after where they’ll be transferred to Adiala Jail.

The images of his departure, to a heartfelt message by his mother, to documenting his return to Pakistan despite being warned against, may all work in Nawaz’s favour after all.

And this ultimate ‘sacrifice’ is only too familiar.

This is the same narrative that moved more than half of the world’s population into accepting Jesus Christ as their saviour, making it the most widely practiced religion in the world.

The lion and the lamb

If you’ve ever had the chance of reading the Bible, you may have across the term ‘Lamb of God’ multiple times. This Lamb of God was to be slain and sacrificed so the world could be saved from sin. And then there’s the mention of the Lion of the tribe of Judah found in both the first and last books of the Bible, Genesis and Revelation. This victorious lion is declared to have triumphed and is thus worthy to “open the scroll and its seven seals”. According to Christian faith, Jesus Christ is the one who is worthy to open the scroll and he is the lion from the tribe of Judah. And he is the Lamb of God who made the ultimate sacrifice.

He sacrificed himself like a lamb and became a lion in the process.

You know who else calls himself a lion? That’s right, Nawaz. The party’s official symbol is a lion. Will Nawaz’s ultimate sacrifice result in his party’s victory once again?

Then one of the elders said to me, “Do not weep! See, the Lion of the tribe of Judah, the Root of David, has triumphed. He is able to open the scroll and its seven seals.

Then I saw a Lamb, looking as if it had been slain, standing at the center of the throne, encircled by the four living creatures and the elders. The Lamb had seven horns and seven eyes, which are the seven spirits of God sent out into all the earth.

How come the Sharifs are so suddenly willing or rather eager to go to jail? Especially at a time when we’re less than two weeks away from the General Elections.

Could this be a bigger game plan? Perhaps. Or was this the plan all along?

No money in the world could buy them the kind of ‘martyrdom’ they would get from behind the bars. After all, we saw the exact same narrative in the political history of Pakistan Peoples Party (PPP). As a leader Zulfiqar Ali Bhutto was power-hungry and not very clear in his vision. He advertised himself as a liberal, leftist politician but then drafted the 1973 Constitution and was pretty much responsible for everything that followed. But his hanging gave PPP a clean slate.

Ironically, he became larger than life in death. He may not have wanted to be the slain lamb but his sacrifice led the future for his party. He became the immortal lion.

We saw history repeat itself in 2007. Even before the general elections were held, Benazir Bhutto’s assassination had brought the PPP a wave of the sympathy vote.

This time the biblical theme of sacrifice is being played by PML-N. Seems like Nawaz Sharif knows this all too well that in becoming a lamb he will actually emerge the most leonine.