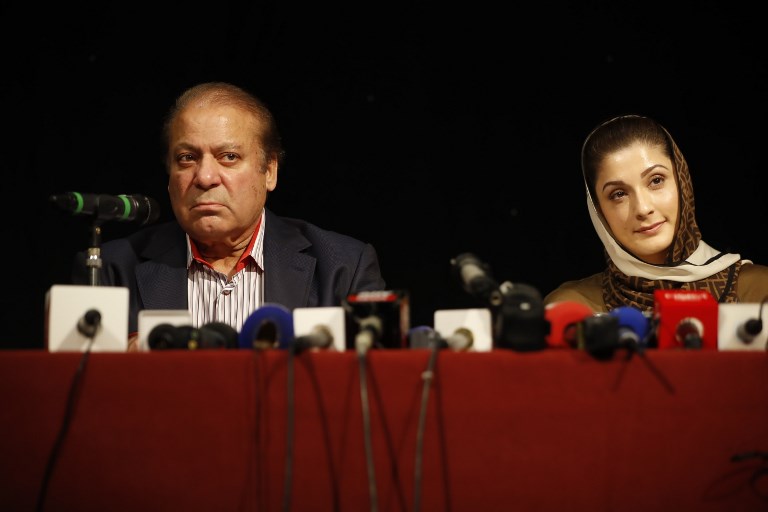 KARACHI: An accountability court sentenced last Friday former premier Nawaz Sharif and his daughter Mayram Nawaz to 10 years and seven years imprisonment, respectively.
What the case boils down to is as follows:

There are assets that belong to the family of Nawaz Sharif that his family means cannot duly account for.

How did it first come to light?
Two words: Panama Papers.

Upon revelation of certain details by the Panama Papers, an inquiry was demanded and the Supreme Court took note of the same. A Joint investigation Team was created, and its appointment was duly recognised as a victory by both the NS brigade as well as his opponents.

The JIT compiled a voluminous report, which the court held to have shifted the burden of proof (a duty placed upon a civil or criminal defendant to prove or disprove a disputed fact) upon Nawaz; a burden that he prima facie did not discharge with satisfaction.

Although he was disqualified on a separate point of unwithdrawn receivables, Sharif was given the chance to defend himself by way of National Accountability Bureau (NAB) references and investigation as directed to be filed by the SC.

Brace yourself. Things are about to get technical.

The NAB court revisited the JIT report and examined all the relevant parties to the case other than Sharif’s sons whoabsconded from the trial.
Nawaz’s lawyer’s arguments were focused around the need for due process and a fair trial. For every document relied upon as provided through the JIT report, Sharif’s legal team focused upon evidentiary requirements which were not met, such as the documents not being originals, the deliverer of the document not being its scribe or its witness; the documents not pertaining to the accused directly and so on.
After a trading of several volumes of judicial precedent, the NAB court decided that the case was an answerable one based upon the evidence presented by the Prosecution, and that Sharif had failed to answer the case adequately. One of the central reasons the NAB court used to pass Sharif over the threshold of reasonable doubt was that once the burden of proof had shifted by way of the assets being shown to be his, Sharif and his family failed to provide for any reasonable form of evidence that their version of the story was the correct one.

What was the Defense’s argument?
Having friends, aka the Qatari royal family, in the right places.

Sharif’s story is that there were business relations between him and the Qatari royal family, which owned certain properties in London. These properties were used by the Sharif family in the 90’s due to their familial friendship with the Qatari’s and not due to any ownership interest.
In the 2000’s, certain family assets were settled, and in pursuit of the same Sharif desired that his share of the Qatari investment be realised by way of the properties in London, and that they be transferred to his eldest grandson. It was to effect this family settlement that a trust deed was registered in 2006, and Maryam was the trustee who was holding these flats for the benefit of her brother/s.

Did they provide evidence?

In support of this version of events, the Sharif family produced two documents: a letter by a Qatari and a trust deed. The letter is an estimation of events, and the writer of the letter did not bother to back it up by appearing in court. This leaves the trust deed, which we shall come to later.

What was the Prosecution’s argument?
1. The prosecution’s story is that the London properties belong to two BVI registered companies called Neilsen and Nescoll since the mid 90’s. This is proven by deeds recorded in the relevant property registers of the UK. Since these properties were in the use of the Sharif family and they were paying the amenity costs of them as well as residing in them before 2006, the prosecution argued that the onus shifts upon the Sharif family to prove how they were not theirs in that period of time.
2. This claim is further bolstered by the Prosecution when they argued that certain members of the Sharif family, Nawaz, Shahbaz and Abbas Sharif, after losing a claim in the UK High Court in the late 90’s and failing to pay the monies due, had their assets attached by the court until they made payment. The London properties were the assets attached, and this attachment was then released by the Sharifs by way of settlement of the claim through other means. This further adds to the onus to disprove, as do certain banking correspondence entered into by a Saudi bank and Maryam that mention her interest in the London properties.
3. Finally, the prosecution argued that the trust deed was not the reason why Maryam finally appeared on the bearer certificate in 2006; it was actually a result of a change in transparency laws in the BVI jurisdictions which made it mandatory for shareholders and owners to be listed on the certificates of the company. These laws were brought about as a result of a global tightening of regulatory principles so as to better fight money laundering and prevented from a shell within a shell ownership of assets. The prosecution argued that the 2006 naming of Maryam is merely a formalising of the asset situation that prevailed well before that date, in order to bring the ownership in accordance with the more stringent amended laws of the BVI states.

To all of these arguments, NS family responded by arguing the technical grounds of impermissibility and imperfection of the evidence presented.

In the face of these two positions, the NAB court decided that the Sharifs are guilty of the lesser standard of proof required to prove that assets are beyond means whilst a member of their family was in public office. The Sharifs are held as innocent of the more direct standard which requires a link between the assets and the holding of public office to evidence those ill gotten gains, ie evidence of corruption. But direct corruption in public office was not within the scope of the Avenfield reference in the first place, and hence irrelevant. Convictions are meted out for the main offence, with Nawaz getting 10 years and Maryam getting seven for abetting him.

1. The eyelet with which the document has been bound has been tampered with.

2. Certain pages have more staple perforations than others.

4. Last but definitely not the least, the font used to type up the document (Calibri) was not commercially available until January of 2007.

Nawaz’s take on Calibri
To disprove the trust deed analysis of the expert, the Sharif family team firstly brought into doubt his expertise, next they argue that developer versions of the font could have been used.

Did they have evidence?
No.

No evidence is presented from their own sources to verify the authenticity of the trust deed. No attempt is made to qualify their own side of the story with an expert of their own.

Now, things get interesting
Suppose a superior court finds the shifting of the onus of proof upon the Sharifs with regards to their assets being beyond their means to be unreasonable. Suppose it finds the criminal standard that needs to be met has in fact not been met and the Sharifs ought not to have been convicted of having assets beyond their means. What happens to the fraudulent trust deed? Has that not been proven beyond reasonable doubt? So even if the conviction of assets beyond their means is thrown out, Nawaz’s 10 and Maryam’s seven years become moot; there still stands the one year Maryam got for the attempt to defraud the court with a fraudulent document. That is a conviction a court will find very hard to overturn.

So, the real question is: will Nawaz and Maryam ever be able to hold office?

Article 63[1] [h] of Constitution of Pakistan disqualifies anyone convicted of two years or more from contesting in elections for a period of five years from the date of their release. This does not apply to Maryam, as her fraud is only punished by a one year sentence. However, the State puts a higher burden upon those convicted under the NAB ordinance, section 15 of which disqualifies anyone convicted under its sections from holding public office for 10 years.
Supposing a government comes into power that feels that the more stringent NAB disqualification of 10 years is unwarranted, and the constitutional limitations of article 62 and 63 are more than enough. It proceeds to amend the NAB ordinance and removes section 15 of the law altogether. All this would require a simple majority; and it would be in the interests of parties other than the PML N to avoid the higher disqualification standard of the NAB also. Maryam’s one year conviction stands, but because it is below the disqualification threshold that the Constitution mandates; it now carries no restriction from contesting. Maryam will be able to contest elections. From prison.