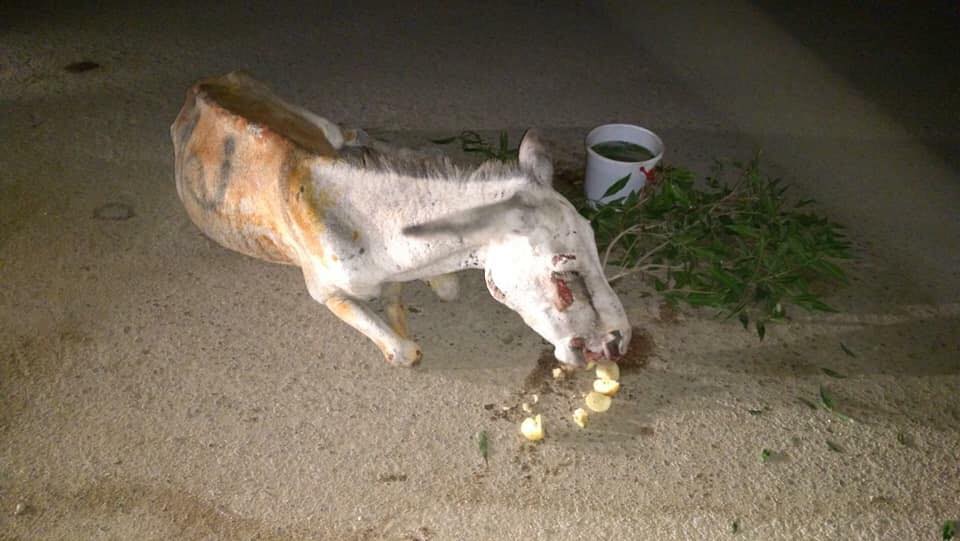 KARACHI: Days after Pakistan Tehreek-e-Insaf chairman Imran Khan made controversial statements about PML-N supporters being proverbial ‘donkeys’, a real donkey was discovered in an extremely critical condition in Karachi with the words ‘Nawaz’ spray painted on it.

With the upcoming elections looming upon us, no one is spared from the wrath of this time…not even the most helpless of animals. This is a hate crime. A #donkey beaten to pulp, punched in the face and abdomen several times, nose broken, kicked all ove.. https://t.co/OIKM2oRSuu pic.twitter.com/it2Fgct9DT

Ayesha Chundrigar Foundation, an animal rights organisation, took to Facebook to share the story of the abused donkey which was brought to them by an individual, Abdullah. According to the NGO, the donkey had been “beaten to a pulp, punched in the face and abdomen several times, nose broken, kicked all over his body until he collapsed, has rope marks and a car rammed into him.” While ACF chose to blur out the name of former premier Nawaz Sharif, who has recently been imprisoned on corruption charges, the original images surfaced on Twitter, with several people condemning Imran Khan’s choice of words for his political opponents.

A helpless animal horribly abused because PTI thought it would be fun. This shortly after their leader referred to supporters of one party as ‘donkeys’. https://t.co/U5WFr1jo7e

This is what happens when you are irresponsible with ur words politicians. Ur followers are so jahil and barbaric they will do such things. That's why we must discuss policies, not result to name calling. I hope you learn from this @ImranKhanPTI https://t.co/digAKjIRDr

SADISTIC BARBARITY
Only mental depravatio & disease would make anyone be so cruel and inhuman. Someone wrote Nawaz on this donkey and then beat it to this condition. Those who did this are a blot on their own political ideology, on Pakistan, on humanity.https://t.co/M4WWmYqBlw

“It’s absolutely shocking and disturbing. There are no words to condemn this tragedy,” said Fawad Hussain, a spokesperson for PTI. When asked whether PTI takes responsibility for this incident, he said: “Absolutely not. There is no question that PTI supporters have nothing to do with this. All our supporters are educated people from middle class families. This is the work of someone who is inhumane and has no regard for animals,” he concluded.

The donkey is being treated by ACF. They claim that while the donkey has sustained external wounds, there seem to be no internal injuries or damage to the organs at this point. The psychological trauma is visible because “he is not eating much and his body is still stiff yet shaking in fear,” they wrote.