Popular belief dictates that the animal is naapak or impure. Is that a misconception or a fact? 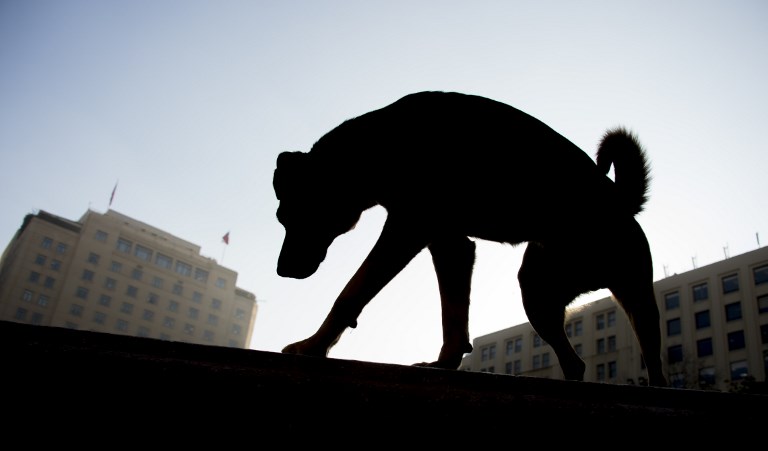 A stray dog is pictured in front of La Moneda presidential palace in Santiago on July 26, 2017. On 27 July is celebrated the stray dogs international day. The population of dogs in Chile fluctuates between 2,600,000 to 3,000,000, of which 25% are street dogs, according to a study by the University of Chile. These dogs live on the streets without birth control, vaccines or deworming, being exposed to diseases and becoming a danger to humans. / AFP PHOTO / Martin BERNETTI

KARACHI: There’s that one question to end them all: Are you a cat person or a dog person?

Of course many of you will choose dogs. But a glance at the streets and you’ll know it’s no secret that animal rights are taken lightly in Pakistan.

Things are further complicated when we speak about dogs and Islam. Many are of the opinion that dogs are naapak or impure and hence, forbidden in Islam. There is popular belief that angels do not enter a house that keeps dogs.

Hamdah Khan’s house in Karachi’s KDA presents another picture. The 25-year-old is the owner of five well trained dogs that she dotes on.

Hamdah comes from a religious family. Her uncle is a spiritual guide and many people visit him in their house for religious guidance. He also happens to be an avid dog trainer.

“I’m very religious and offer prayers every day, and I think having dogs at my house is not forbidden in Islam,” Hamdah maintains. Five years ago, when she wanted to keep a pet, she and her family thoroughly researched on the subject and concluded that there was nothing wrong in having a dog as pet. She also regularly maintains a blog site dedicated to her dogs.

Many Islamic scholars, however, consider it haram to keep a dog. When asked for his opinion on the matter, the mufti at Jamia Banoria, who withheld his identity, seemed irked.

“Can we keep a guard dog in the house at least?”

“Why can’t you have a human being instead?”

“Okay, but keep it out of your house and just for security reasons. The dog shouldn’t be there for your interests.”

Hamdah believes scholars are biased against dogs. “Scholars say there are at least three conditions to keep dogs as pets. For instance, hunting and security. I say that if Islam allows having dogs in such conditions, we can also have them in normal circumstances with some precautions,” she maintains. These precautions, according to her, are cleaning the part of your body the dog licks and keeping it away from your place of prayer.

There are the few modern Islamic scholars who share this view. Islamic theologist Javed Ghamidi, for example, is of the view that Islam allows keeping dogs at pets.

“In Surah e Maidah, Allah says Muslims can eat the prey caught by trained dogs. Tell me how will you train the dog? Will you just go to the jungle and make it do whatever you want him to do? No! You will have to train him at home,” Ghamidi said in an interview.

The Holy Quran mentions dogs in a Surah which states: “And those Jawarih (beasts and birds of prey) which you have trained as hounds, training and teaching them (to catch) in the manner as directed to you by Allah….”

Ghamidi says if angels hated dogs, it would have been quite easy to escape death by having a dog at your place since Azrael – the angel of death – wouldn’t enter

Ghamidi goes on to say God said it is but his will that lets you train the dog.

“… what you have trained of hunting animals which you train as Allah has taught you,” the verse continues.

He says if angels really hated dogs, it would have been quite easy to escape death by having a dog at your place, keeping Azrael – the angel of death – away from your house.

The scholar reminds us of how God speaks of a dog which Ashab-e-Kaif had kept with them. “Allah says that to protect those young men who left their houses for the sake of Islam, a dog sat outside their cave,” Ghamidi says.

According to a Hadith, God once forgave a sex worker who gave water to a dying dog in her shoe. Sahih Bukhari hadith (3143) narrates: “Allah had once forgiven a prostitute. She passed by a dog panting near a well. Seeing that thirst had nearly killed him, she took off her shoe, tied it to her scarf, and drew up some water. Allah forgave her for that.”

There are may others like Ghamidi and Hamdah who want to clear what they believe to be misconceptions of man’s best friend and that too with the help of Islamic jurisdiction.

Saharish Saleem has two Doberman dogs, whom she trained herself. She says she faced no opposition from her family about keeping dogs. “The only concern was raised by people from my neighbourhood, whom I think were afraid of dogs. I firmly believe that the religious idea of deriding dogs comes from fear,” Saharish says.

“For me, being humane is most the important thing. I cannot see a helpless animal living in misery.”

Saharish also asserts there is not a single verse in the Holy Quran which says that angels won’t enter your place if you keep dogs inside. “Islam asks us to be cautious with dogs because of their saliva and the diseases that can be transmitted to humans. One can always keep a dog at home if she or he is taken care of and is free of any disease,” she says.

She also believes spending time with the animal will make anyone’s fear vanish. “Anyone who experiences raising a dog will never think that it is prohibited because by that time, the fear factor will vanish,” she maintains.

On the other hand, dog owner Waleedullah Shah has an interesting theory. He believes that prohibiting dogs in Islam depends on their colour. “Only if the dog is jet black, you can’t keep it at home,” he says. Waleed has had a German Shepherd for almost three years now for protection.

“I seldom bring my dog to my room as my family has issues with it. Also, I have him only for the security. He stays in his cage during the day and gets free only after the dusk at our lawn,” he adds.

Waleed takes extra care to wash his hands after grooming his dog and takes a shower after bathing him. However, he also believes that Islam doesn’t forbid keeping dogs as pets if the owner takes care of not letting it live and sleep inside.