Ms. Marvel is a true desi experience, only better 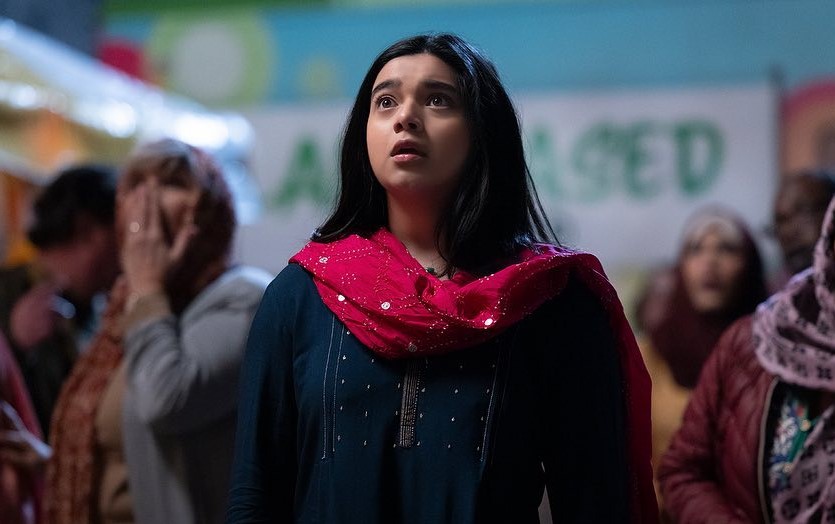 KARACHI: Pakistanis were over the moon when it was revealed earlier this year that Disney was finally going to see its first Pakistani Muslim superhero. From Iman Vellani being chosen to play the lead, Kamala Khan, to our very own Sharmeen Obaid Chinoy being co-director for the show, fans were more than excited to see what Ms. Marvel had in store for them. Only better was the fact that more than one Pakistani woman walked the red carpet in Hollywood as Nimra Bucha, Samina Ahmed and Mehwish Hayat were revealed as cast members as well. One look at the trailer for the show and you can also spot Farhan Akhtar from our neighbouring country. However, with Ms. Marvel airing its first two episodes earlier this month, many might be wondering: is it worth the hype?

Kamala Khan is a typical American 16-year-old who is obsessed with the Avengers. From action figures to posters in her room and ultimately designing the perfect costume for the AvengerCon event, Kamala is all about superheroes. Except that she has desi parents. So the simple act of seeking permission to go to a harmless event of course becomes a task. While Kamala tries explaining the purpose of the event to her parents by using her bestfriend, Bruno, as an excuse (because of course, all desi kids only go out when they are being forced to, God forbid we ever want to go somewhere on our own), her mother immediately jumps to the conclusion that she wants to go to a ‘party’. At night. Oh, the horror!

Almost any kid who grew up in a desi household can relate to the scene. Even worse is the fact that Kamala’s dad offers to go with her to the event, wearing matching costumes. Her mother designs the true halal version of the Hulk costume, all of which is pretty normal behaviour for desi parents.

More than that, it is the small things in the show that make you go ‘oh, I recognise that’. Be it 'Ko Ko Koreena' playing in the background, or aunties in the market gossiping about other girls’ marital status, it all seems real. Team Ms. Marvel also gives its viewers the true Muslim experience by incorporating a mosque scene and an Eid celebration. Muslim women back home may have limited access to mosques but for anyone who has visited Western countries where the Muslim community is tightly knit, it is a common concept. And the Eid festivities are even more so enjoyable.

Episode 2 also introduces us to two of our local faces. Samina Ahmed plays Kamala’s nani and is introduced in the most nani way possible. She’s on a video call with her granddaughter except that her phone is placed an inch away from her face and she speaks loudly enough for her voice to travel to the next room. Reminded of your own grandparents yet?

Nimra Bucha, on the other hand, makes an appearance in the most captivating way possible. The first time we see her, it is for a fleeting moment and in a terrifying avatar. But that’s the thing about Nimra Bucha, you can identify her even if she only graces the screen for a second.

And of course, no desi girl story is complete without that one cute boy who appears out of nowhere and clicks with them instantly. Kamran pulls at Kamala’s heartstrings as soon as they meet. The two bond over desi parents’ jokes and Shahrukh Khan’s best hits. Even more so captivating is the fact that Rish Shah, who plays Kamran, sounds exactly like Riz Ahmed with his British accent. And what would desis not do for a flawless British accent and some more of Ahmed?

While Kamala Khan seems to be living her dreams (up until the point where her powers start to lose control and the police is after her), one cannot help but reflect on the fact that maybe Kamala’s life is not truly representative of Pakistani Muslim girls. Her freedom might be limited but compared to the fear in which most Pakistani girls live, Kamala seems to have it all.

How many 16-year-olds in Pakistan can afford to have a guy bestfriend who their families know about and who they hang out with pretty much all the time? How many of our girls can go cycling at night without fear accompanying them? Would any of us even live to see another day if we ever dared to sneak out of the house while our parents were awake?

And maybe that’s exactly why we need Ms. Marvel. To provide us with an escape. To let us see ourselves in Kamala Khan even if it is only for an hour. To live vicariously through her adventures. To let fiction and magic save us.