From Eid rituals to directorial aspirations, Mahira Khan tells all with Haroon Rashid 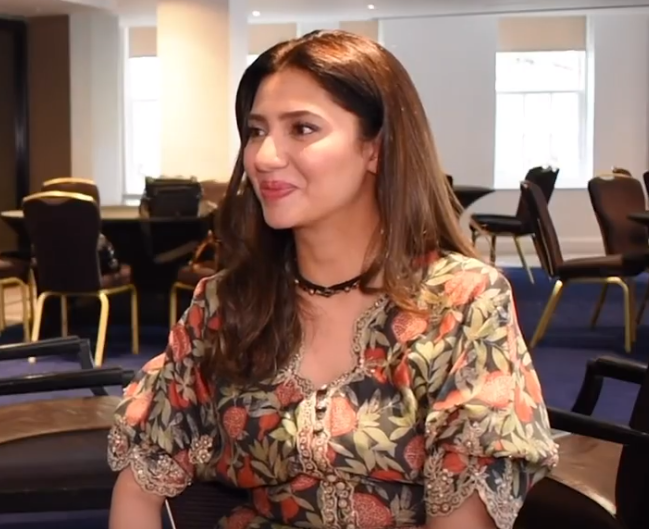 KARACHI: For ten years, Mahira Khan has continued to wow audiences. Effortlessly beautiful and incredibly diverse, the actor is known for picking up roles of a strong female lead. Audiences are naturally attracted to Mahira Khan and want to know as much as they possibly can about her. Does she like aaloo in her biryani? Is she a good cook? What does Eid look like at the Khan residence? What is it like being Mahira Khan and what is this talk of an Oscar and Grammy Award? BBC’s Haroon Rashid sat down with Mahira Khan and asked her all the questions fans had for her. Here is what we learnt.

If you have ever wondered what Eid looks like in the Khan residence, you do not have to wonder anymore. Haroon Rashid asked Mahira Khan just that and her answer was as relatable as can be. Eid in the Khan house is as lazy as it comes. They wake up, get dressed and the men go for namaz. They come back, have breakfast and the rest of the day is spent in pajamas.

What would you find on the breakfast table? Halwa Puri, of course! Breakfast is courtesy of Mahira Khan’s father. She stays far far away from the kitchen because as she puts it, “I am only good to consume food, not cook it.”

Haroon Rashid dubbed his interview with Mahira Khan as the most controversial interview to date. And for good reason. Rashid treaded on territory that can go incredibly wrong and that is asking whether aaloo belongs in biryani. Taken aback by the sheer absurdity of the question, Khan responds with two simple questions. Firstly, why not? Secondly, have you had biryani from Karachi? Khan is a firm believer that Karachi beats Lahore in the biryani department and she also believes there is no such thing as chicken biryani, it is only made in mutton. However, she did reveal that aaloo does not belong in mutton biryani only in chicken biryani (if you really must!)

Haroon Rashid also asked Mahira Khan some work related questions. To be precise, he questioned her about her work on the big screen. Khan was open about her frustration about the delays in the movies. She joked about how it seems like her movies end up in the Bermuda Triangle and also made it clear she wasn’t ready to talk about Maula Jatt. She did, however, reveal that Quaid-e-Azam Zindabad will release next Eid which is super exciting!

Mahira Khan was also brutally honest and revealed that her drama Hum Kahan Kay Sachay Thay was something she did because she wanted to work and since films were not happening, she opted for the drama. However, she is now in search for a role that “feeds my soul.” And until she finds that role, she isn’t going to sign up for anything new.

She did say that Eik Hai Nigar fed her soul and so one can imagine how the bar has been set. Speaking of the telefilm, Rashid also asked her what it felt like both acting and producing the film. Khan talked about how she hardly slept during the process because there was so much to worry about and by the time things wrapped up, the call time would be a few hours away. The process did teach her to sympathize with the rest of the crew. And she also made sure there was good food on set because she believes good food equals good morale.

What is it like being Mahira Khan asked Haroon Rashid in so many words and she revealed that there is pressure to prove herself. She let audiences in on a tidbit that before her work is released, critics have an attitude along the lines of, “Ugh, now what is she up to.” But luckily, when her work is released, that attitude turns into something more appreciative. And so now, she is learning to take the pressure positively and not do things to please others.

Haroon Rashid and Mahira Khan also talked about her journey and the actor looks back on the past ten years fondly. She expressed gratitude about how from the get go, as a newcomer, she got to work with the likes of Asim Raza, Shoaib Mansoor and Sarmad Khoosat. She did, however, talk about the highs of success as well as the lows of failure. But she did call it a magical journey, full of love from fans who grew with her.

So what is next for Mahira Khan and what is her ten year plan? Her knee jerk response had been more movies but then she quickly changed it to more content. She also expressed her desire to try her hand at directing as well. The two joked about how the sky is the limit and so why not throw in an Oscar Award and even a Grammy win (even though Khan doesn’t even sing)!

You can listen to the interview here.