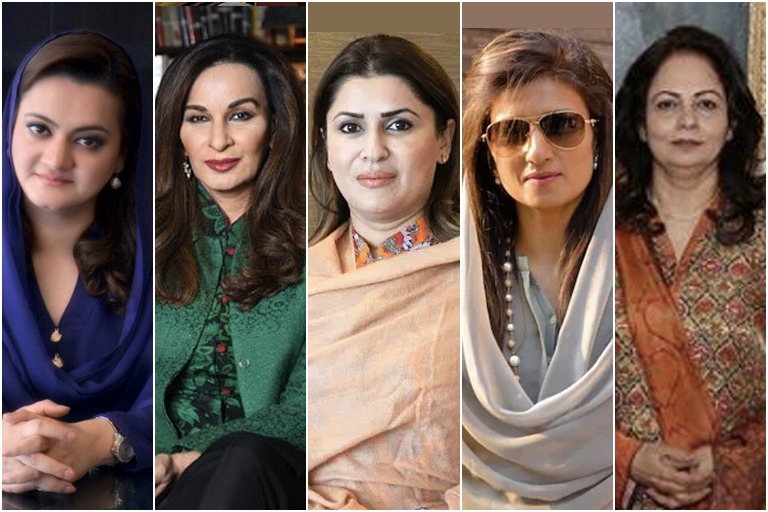 KARACHI: With Pakistan’s political situation gaining some semblance of stability, the new premier Shehbaz Sharif finally announced his version of the Pakistan federal cabinet. It took him 8 days to make the announcement because reportedly, Sharif wanted to form an “inclusive government.” Turns out, his version of inclusivity is to include a grand total of five women in the cabinet, three federal and two state ministers. The announcement met mixed reviews, some applauding the decision while others saying it was still too little of an effort. So who are these five women appointed by Shehbaz Sharif in his cabinet and what are the masses saying?

Marriyum Aurangzeb has been assigned to manage Information and Broadcasting, something she has a great deal of experience with as she was the liaison for PML-N.

“We intend to positively use social media to highlight the prosperous and peaceful face of Pakistan, including development and progress being undertaken to the world.”
– Federal Minister for Information, Ms Marriyum Aurangzeb pic.twitter.com/pDaG6vQSSc

She began her political career in 2013, after she got her Masters in Development and Environmental Policy from the UK. She served as member of the National Assembly, as the minister for Broadcasting, Information, and National Heritage. Aurangzeb was often seen standing side by side Maryam Nawaz during her political appearances and was often vocal of her criticism of Imran Khan.

Aurangzeb is also known for advocating for the rights of media persons and free speech.

The next woman to be included in the Pakistan federal cabinet is none other than Sherry Rehman.

Rehman is no stranger to politics and has served as the country’s first woman Senate opposition leader, as the Vice-President of the PPP and was recipient of the Nishan-i-Imtiaz in 2013. Shehbaz Sharif appointed Sherry Rehman with leading Pakistan’s response to climate change as federal minister.

Taking oath as federal minister for the second time. Chose Climate Change because for me it is of cross-cutting importance. It is a challenge all over the world, but Pakistan must start fighting the battle to save its future. It is a lot more than planting trees pic.twitter.com/mnLA1PMoH6

Prior to joining politics in 2002, Rehman had completed her Master’s Degree from the UK and began her professional career in journalism with The Daily Star and then became the editor-in-chief of The Herald.

Another familiar face in the federal cabinet of Pakistan is Hina Rabbani Khar who will serve as State Minister for Foreign Affairs.

In 2011, at the age of 34, Khar was the first woman and youngest foreign minister of the country. During her time in politics, Khar was known for her “innovative foreign policies” and for stressing on the importance of reducing dependence on the USA.

She has, however, been on the receiving end of criticism for what has been dubbed as a glamorous lifestyle which the Guardian had pointed out consists of “pearl necklaces, elegant costumes, Cavalli sunglasses and a stylish Hermes-made Birkin bag worth at least $9,000 (£5,500)”.

Shazia Marri has been into politics since she was a part of the National Assembly on a reserved woman’s seat back in 2013. She had also served as the Provincial Minister for Information and Culture.

The final inclusion in the federal cabinet is that of Aisha Ghaus Pasha.

Pasha, the wife of economist Hafeez Pasha, who had served as an economic adviser to the PPP and PML-N governments in the past, was nominated for the seat in the National Assembly in 2018 on Maryam Nawaz’s recommendation.

Pasha revealed that she does not come from a political background and instead. was an academic and policy analyst. Shehbaz Sharif was impressed by her advice to provincial governments and convinced her to join his cabinet when he was serving as Chief Minister of Punjab.

Now, Pasha has been appointed as a state minister.

The response to the inclusion of these five women has varied a great deal. While some celebrated the inclusion as female empowerment, others questioned the background of these women.

Some extended their congratulations to the women in power:

Twitter users were quick to call out misogynistic comments made about the women:

Unsavoury,inappropriate,misogynistic. Why do women even in the strongest positions become the softest targets for such BS?
And btw for all the controversial appointments in the cabinet, Sherry Rehman & Hina Rabbani Khar both have stellar credentials & performance to back theirs! https://t.co/ZUEyHhzpdK

The women were celebrated as being inspirational:

To the trailblazing, brave, capable, and hardworking women ministers, you are an inspiration to millions of women across #Pakistan @sherryrehman @ShaziaAttaMarri @HinaRKhar

Their competence was also highlighted:

He’s one of the Best, beyond doubt.

And seasoned Economist Dr Aisha Ghaus Pasha is an icing on the cake. She did wonders in Punjab as the Finance Minister from 2013-18 👍🏻

However, some compared the people holding the seats with ministers from the previous government:

Twitter users pointed out some questionable backgrounds of the women appointed:

Not all Twitter users believed that the women were equipped for their roles:

Oxford graduate in Environmental management, Malik Amin Aslam has been replaced by the MA Arts PPP Senator Sherry Rehman as Minister of Climate Change and Environment.@EmaanzT#امپورٹڈ_حکومت_نامنظور

With the public divided over Shehbaz Sharif and his choice of cabinet members, it will be interesting to see how these women will fare in their new roles.