From the cast of Baarwan Khiladi 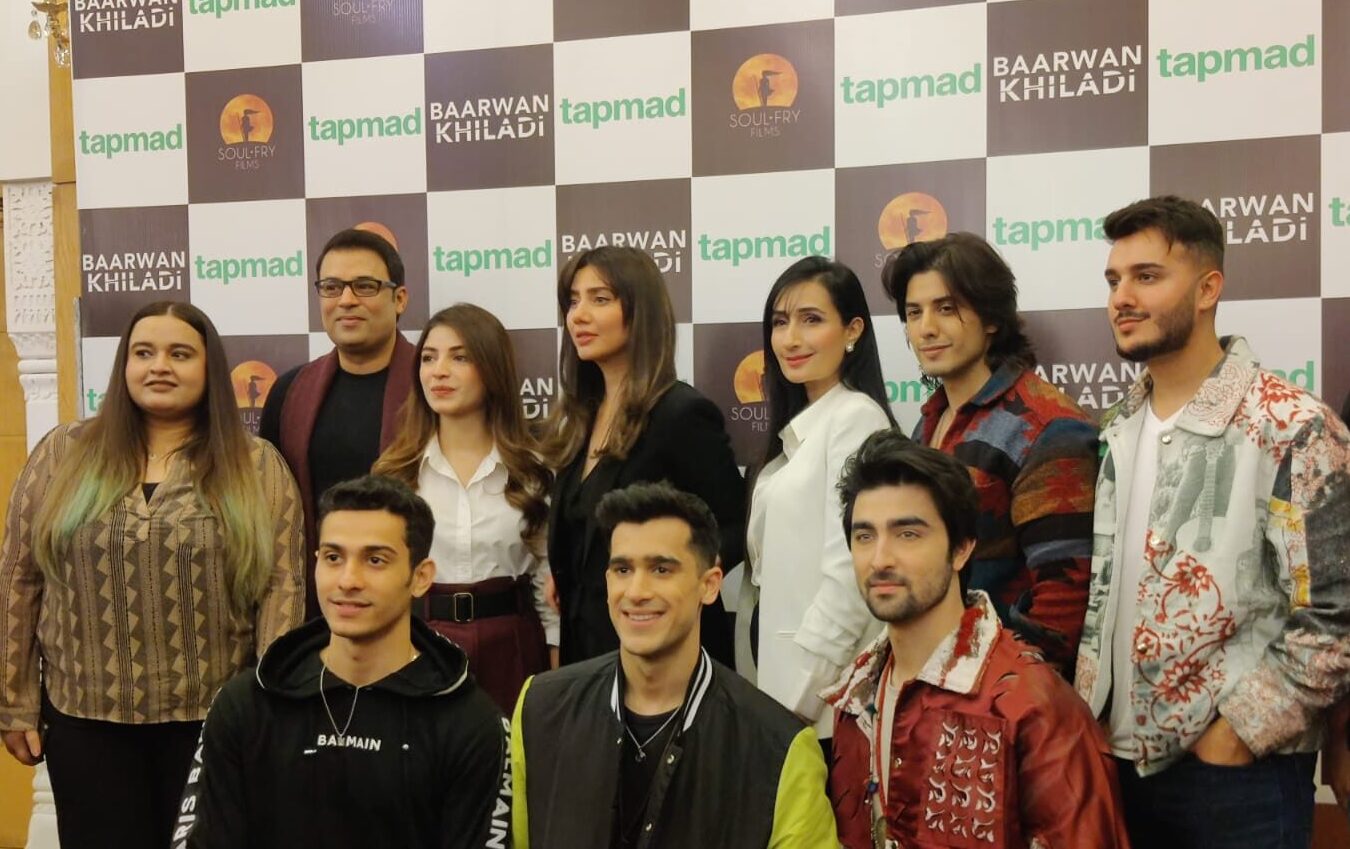 KARACHI: Audiences have grown accustomed to seeing Mahira Khan on screen. Whether it’s her iconic role of Khirad from Humsafar or Mehreen from Hum Kahan Kay Sachay Thay, she continues to be Pakistan’s sweetheart. However, with Baarwan Khiladi, Khan announced that she was going to stay behind the camera this time. In a recent press meet just days before the release of the show, the cast and crew opened up about what to expect from the upcoming web series.

Baarwan Khiladi is a sports centric web series which will air on Tapmad Entertainment and is written by Shahid Dogar. Directed by Adnan Sarwar, Nina Kashif and Mahira Khan have produced the series. So, how did Mahira Khan, someone who admits to being terrible at sports, end up producing a sport based web series?

Khan opened up about how when she was acting, she always had a sense of direction and always enjoyed the creative process. In her mind, she would always envision how she would do things and so she was always inclined towards working behind the camera. However, she would have opted for something with songs and dances, if she had a choice. But Baarwan Khiladi was a risk she was willing to take because as per Mahira Khan, if there is no risk, there is no fun or glory in the process.

A lot of people wondered why Khan, who is a staunch supporter of women’s rights in Pakistan, chose to work with a dominantly male cast. She laughed and said who knows, there might be a season 2 of Baarwan Khiladi centered around the women’s cricket team. When asked the same question again later on, she explained that in order to reach your goal, the process is very important. And she had to start somewhere to reach her end goal. With a new playing field open for her, Mahira Khan did reveal that she wants to do something different, perhaps tell the story of middle aged women and their struggles.

Explaining why the show is a web series and not a drama or film aired on TV, the crew pinpointed how the younger generation is more digitally inclined. They have their phones in their hands and have a wide variety of options to choose from on streaming apps such as Netflix. And so keeping that in mind, they felt a web series on a digital platform would be more relevant. The team also has bigger plans than just releasing their web series, they hope that this will be the first step in making our content reach an international standard.

Producer Nina Kashif, in an exclusive interview with Cutacut, talked about how working with a digital platform gave the cast and crew more freedom, “We had a lot of freedom because we have strict rules for TV and cinema and luckily we don’t have that strict of rules for online content till now. So we have more creative freedom.” She explained that this freedom was important in making the characters more real, “We want to be real also. Around the world, there’s a certain language, there’s a certain way and we want to show it exactly how it is.”

She talked about how wonderful of an experience it was working with a young group of boys on set. She said her cast which includes Shahveer Jafry, Daniyal Zafar, Khaqan Shahnawaz and new comers such as Zarrar Khan and Meer Yousuf “were very enthusiastic, very passionate about it and very excited. And we were equally excited to work with them because they’re not just pretty faces, they’re very talented boys. They all gave auditions and there was no nepotism involved.” The producer also revealed that while she knew that Shahveer Jafry was popular, she did not know just how popular he was.

Nina Kashif has an impressive list of works to her name and we have seen her work diversify from Eik Thi Marium to Humsafar to Baaghi. However, she does want to tap into different genres and while she did not want to reveal exactly what genre she planned on exploring at the risk of revealing too much, she did let Cutacut know that she might delve into taboo subjects.

Associate producer Faiza Malik was also all praises for the cast of Baarwan Khiladi. She said that while one would assume they would be carefree, but despite the fact some of them are well known names in the industry, “They were all punctual, always on time. They weren’t picky about the food they were given and whatever was asked of them they would say ‘Okay Faiza, we are up for it.'”

Malik talked about shooting in the cold winters of Lahore, something Nina mentioned too. “Despite the freezing temperatures, the 15-hour-long cricket shoots, the retakes, the running in the stadium, they were all very good. Phenomenal boys.” She described the project as something close to her heart and how working with the boys was so much fun that no matter how long the day may have been, work didn’t seem like work. We asked Faiza Malik how much effort the boys had to put into learning how to play cricket properly, and she revealed that director Adnan Sarwar had been a professional cricketer so they gave them training. The boys had also been sent to a camp for training for a week and a coach had also been present during the shooting. They wanted it all to be as close to reality as possible.

Which was also a challenge for lead actor Daniyal Zafar. He revealed to Cutacut that growing up, he had been more of a football fan than a cricket fan and so, “I didn’t know cricket at all and had to learn it from the start.” While he was offered the choice to have a stunt double do his scenes for him, he refused because, “When you’re playing a character you need to be so immersed in it that you need to live it. And part of living it is that you are that. Then I’m not Daniyal who doesn’t know how to play cricket then I’m Akbar who is the best player.”

Another challenge for Zafar was learning how to speak proper Punjabi with the accent. He had thought it would be easy but found that “To carry forward that accent in the zone, with the emotions from laughing to crying,” wasn’t as easy as he had thought. While he doesn’t think he’s cut out for the Pakistan Cricket team just yet, he has considered opting for a different kind of role in the future. He’s played a sportsman, he’s played a lovable husband and now he wants to play a villain. Not the kind who tries to break a marriage but someone like Yasir Hussain in Badshah Begum. However, as much as he’s enjoyed acting, Daniyal Zafar revealed that he still gravitates towards singing more.

For Zafar, the role was close to his heart because his character Akbar resonates deeply with him, “He’s emotional, sensitive, crazy.” He was able to relate to Akbar’s highs and lows but “I’m not a guy who gets angry or who gets pissed off and so that was the only emotion that I was not familiar with.”

It’s safe to say that Baarwan Khiladi is on the top of our must watch list and we cannot wait for it’s release on 5th March on Tampad Entertainment!