What better way to celebrate our fashion industry than to have non-Pakistani celebrities wear Pakistani designers? 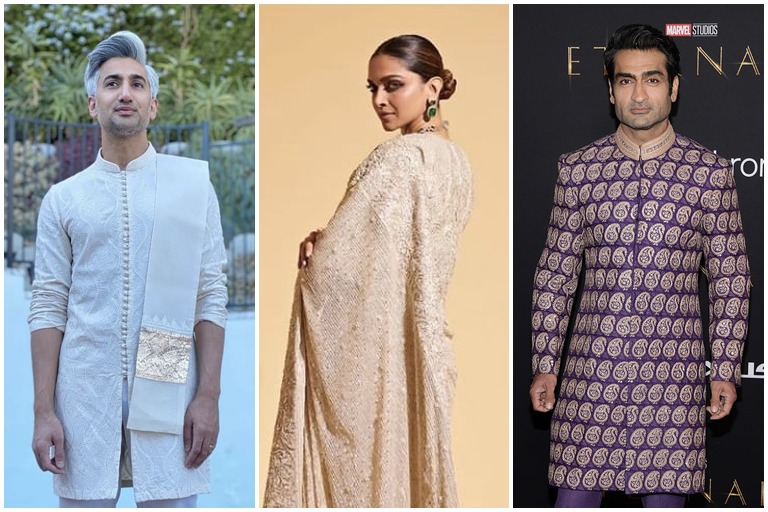 KARACHI: They say art transcends borders and it seems that the statement rings true especially for our fashion industry. This year, we celebrated the craftsmanship of several Pakistani designers whose work was donned on by international celebrities. Here are our favorite looks.

Umar Sayeed is no stranger to designing outfits for celebrities. He’s worked with some of the biggest names in the industry including Mahira Khan, Fawad Khan and Resham. But this year, the designer stepped out of the Pakistani circle and designed Kumail Nanjiani’s outfit for the Eternals’ premier. The actor opted to wear a custom made purple sherwani with gold detailing on the red carpet and he couldn’t have chosen a better Umar Sayeed outfit to showcase the designer’s skill.

Is there any greater pride for a designer to have your design chosen to be worn by an international fashion expert? We should probably ask Pakistani designer Mohsin Naveed Ranjha that question because this year Tan France from the wildly successful Netflix series Queer Eye chose to wear his design to the South Asian’s Dinner. Tan France wore a cream colored sherwani that was hand embroidered and was from Ranjha’s “Yaar Baili” collection.

And it seems as though Tan Fran can’t get enough of Mohsin Naveed Ranhja since he chose to wear the designer again for the British Fashion Awards.

It seems as though our friends from across the border are huge Faraz Manan fans as different Bollywood celebrities have opted to wear the designer over the years. Shahrukh Khan made his first media appearance since his son’s arrest for a Diwali advertisement and Pakistani fans were quick to spot that he was wearing a Faraz Manan creation. The kurta pajama was paired with a jacket with a blend of geometric and floral patterns.

Shahrukh Khan isn’t the only A lister who wore a Faraz Manan creation. Deepika Padukone was also spotted wearing a Faraz Manan saree just recently. The light colored saree  was fully embroidered and the Padukone sported dark smoky eyes in contrast to the light color of her clothes. She looked like a sight for sore eyes!

Nomi Ansari joined the ranks of Pakistani designers worn by huge international stars when his design was chosen by comedian Hasan Minhaj. The Patriot Act star wore a customized Nomi Ansari creation to his sister’s wedding earlier this year and Ansari took to social media to announce the good news. In his Facebook post the designer revealed that the “unique silver peony shade” was a one of a kind customized creation made for Minhaj.