From collaborating with Asim Azhar and Abrar-ul-Haq to starring in a new drama, the actor has been keeping fans updated on her professional life 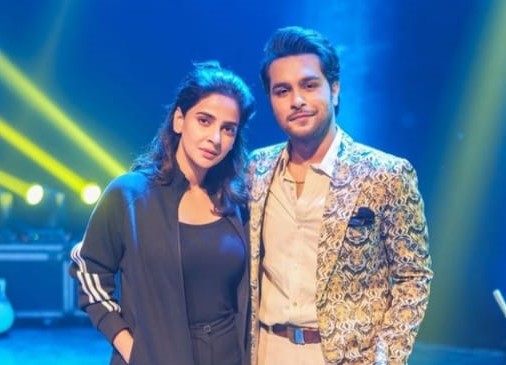 KARACHI: Only recently, we had Saba Qamar in our list of actors we miss in the world of drama. After stellar performances in dramas like Baaghi and Cheekh, it is hard not to miss Qamar on the small screen. However, this does not mean that Qamar has not been working on any new projects. While her film Ghabrana Nahi Hai finished shooting earlier this year, the actor signed a web series with Urduflix more recently. To the excitement of her fans, Qamar has been sharing details of a few other projects on her social media the last few days.

Taking to her Instagram, Saba Qamar hinted towards a collaboration between her and Asim Azhar for an upcoming project. In a fun video, Qamar can be seen playing the harmonium while Azhar stands next to her dressed up. Whether the actor is set to star in the singer’s next music video or if the two are to share the stage for an award ceremony are details that are yet to be revealed.

Another singer that Saba Qamar was recently seen shooting with is Abrar-ul-Haq. In a now-deleted Instagram story, Qamar and Haq engaged in a friendly banter about their project which seems to revolve around the theme of marriage. The nature of the project is still unknown but definitely looks exciting.

Almost as an answer to our prayers, Saba Qamar also has a drama lined up in the list of her upcoming projects. Sharing a sneak peek of the script on social media, the actor wrote, “another day, another project”. The serial has been written by Umera Ahmed while other details are yet to be revealed. Safe to say, 2021 is going to be an exciting year for Saba Qamar! 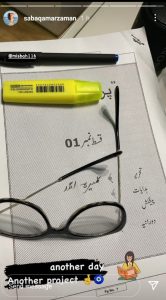