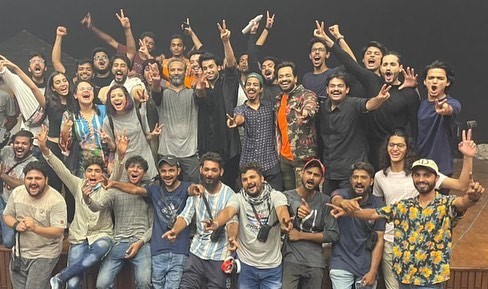 KARACHI: Director Nabeel Qureshi had earlier revealed that his movie, Khel Khel Mein, was going to be a historical drama starring Sajal Aly and Bilal Qureshi. The film is being produced by Fizza Ali Meerza under Filmwala Pictures. Nabeel Qureshi recently took to his Instagram to announce that the film has finally wrapped up shooting.

“Alhumdullilah! Camera Close for Filmwala Pictures “Khel Khel Main,” he announced. “It was very challenging to shoot this feature in 50 Days – During this Hot Weather + Following Covid SOP’s going thru several Smart lockdowns & Travelling, still made sure we match the schedule and finish it on time! Kudos to my Team at Filmwala Pictures & all the cast & crew!!! It only made possible because of you guys! Like a Circus its needs to pack up!”

While the release date for the movie is yet to be announced, Nabeel Qureshi and Fizza Ali Meerza have other movies ready to be released. One of them is the Mahira Khan and Fahad Mustafa starrer, Quaid-e-Azam Zindabad, that we are eager to watch on the big screen.

Sajal Aly and Bilal Abbas Khan, too, have other exciting projects lined up other than Khel Khel Mein. Aly is set to star in Atif Aslam’s Rafta Rafta and along with drama serial Ishq-e-Laa.

Sajal Aly is also currently starring in Zee5’s Dhoop Ki Deewar alongside Ahad Raza Mir. Bilal Abbas Khan, on the other hand, is set to star in Danish Nawaz’s drama serial Dobara along with Hadiqa Kiani.